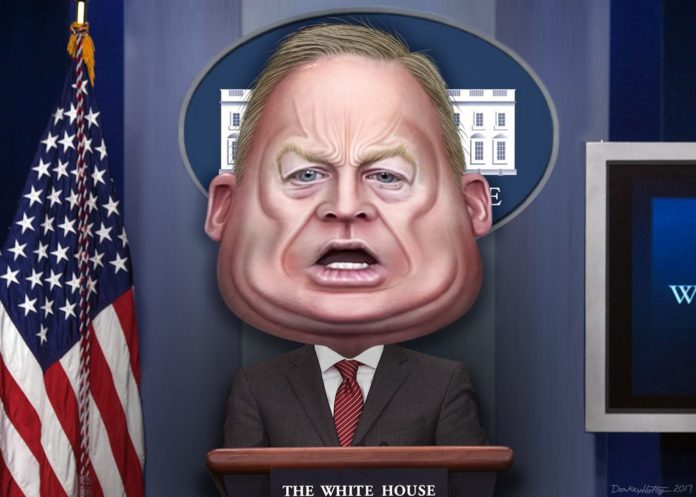 White House press secretary Sean Spicer has had his fair share of controversy in the first 100 days in his new position. In the past, the notorious spin artist has inflated inaugural crowd claims and has insinuated that former President Obama used British intelligence to spy on President Trump, always standing by his word and the administration’s “Alternative Facts”.This time around, however, Spicer is quickly eating his words as he faces an intense backlash for being equated to a Holocaust denier having made the claims that even Hitler wasn’t as bad as Syrian President Bashar al-Assad.

The bold suggestion made by Spicer was that President Bashar al-Assad of Syria is worse than Hitler for using chemical warfare whereas Hitler did not stating: “Look we didn’t even use chemical weapons in World War Two” What spicer is forgetting,  on all days of days (The First days of Passover) is that Hitler did indeed use chemical warfare in the form of gas chambers in concentration camps murdering millions of Jews during the Holocaust. His immense blunder drew gasps from the crowd and was asked to later clarify his comments stating  in his “non-apology” “I was trying to draw a comparison for which there shouldn’t have been one.” These anti-Semitic comments seem to be where the much of the public draws the line with putting up with Spicer the spin doctor, and many have called for his resignation.

As reported by the New York Times:

During his daily briefing for reporters, Mr. Spicer was defending President Trump’s decision to order a missile strike on Syria by trying to lend gravity to the actions of Mr. Assad. American officials accuse the Syrian president of using sarin gas, a lethal chemical weapon, in an attack on a rebel-held area of Idlib Province last week that killed dozens, many of them children.

But in misconstruing the facts of the Holocaust — Nazi Germany’s brutally efficient, carefully orchestrated extermination of six million Jews and others — Mr. Spicer instead drew a torrent of criticism and added to the perception that the Trump White House lacks sensitivity and has a tenuous grasp of history.

He continued, “So you have to, if you are Russia, ask yourself: Is this a country and a regime that you want to align yourself with?”

The White House charged Tuesday that Russia had sought to cover up the Syrian government’s role in the chemical attack.

Asked to clarify his remarks, Mr. Spicer then acknowledged that Hitler had used chemical agents, but maintained that there was a difference.

“I think when you come to sarin gas, he was not using the gas on his own people the same way that Assad is doing,” Mr. Spicer said, incorrectly, before mentioning “Holocaust centers,” an apparent reference to Nazi death camps.

160,000 to 180,000 Jews killed by the Nazis were from Germany, according to the United States Holocaust Memorial Museum.

Mr. Spicer’s explanation drew gasps from reporters in the briefing room. The remarks almost immediately elicited outrage on social media and correctives from scholars of the Holocaust.

“Historically, it’s just wrong,” said Deborah Lipstadt, a leading historian of the Holocaust and a professor at Emory University in Atlanta. Mr. Spicer “should not be making comparisons,” Dr. Lipstadt said. “It’s, at the best, not thought out, and at the worst, shows a latent anti-Semitism.”

Shortly after his briefing, Mr. Spicer again tried to clarify his comments, saying in a statement that he was not “trying to lessen the horrendous nature of the Holocaust.”

“I was trying to draw a distinction of the tactic of using airplanes to drop chemical weapons on population centers,” he said. “Any attack on innocent people is reprehensible and inexcusable.”

But the clarification did not quiet calls from some corners, including from Representative Nancy Pelosi of California, the Democratic leader, for Mr. Trump to fire Mr. Spicer.

By Tuesday evening, Mr. Spicer was on CNN, offering a contrite apology. “I was trying to draw a comparison for which there shouldn’t have been one,” he said.

The Trump administration has a history of missteps on the Holocaust. Days after Mr. Trump took office, a White House statement marking International Holocaust Remembrance Day was sharply criticized for failing to directly mention Jews or anti-Semitism.

Nor was Tuesday the only time Mr. Spicer has shown a hazy understanding of world events or appeared not to understand the implications of his words.

On Monday, he said that the president would retaliate against Syria not only if it used chemical weapons, but also barrel bombs. “If you gas a baby, if you put a barrel bomb into innocent people, I think you will see a response from this president,” Mr. Spicer said.

Many have voiced their displeasure with Secretary Spicer and “the strongest condemnation came from the House Democratic leader, Nancy Pelosi” saying:

“While Jewish families across America celebrate Passover, the chief spokesman of this White House is downplaying the horror of the Holocaust. Sean Spicer must be fired, and the President must immediately disavow his spokesman’s statements. Either he is speaking for the President, or the President should have known better than to hire him.”

Democratic congressman John Yarmuth, from Kentucky, tweeted: “There’s no excuse for Holocaust denial from the White House. It’s an insult to all Americans, Jewish or not, as well as the Nazis’ victims.”

The National Jewish Democratic Council also condemned the remarks, calling Spicer’s remarks “inappropriate and insulting”, adding: “It’s unsurprising, especially given this administration’s tendency to be too casual when it comes to their relationship with the Jewish community. Hitler used chemical weapons. Period. No amount of clarification or walking back from the press secretary’s office should be accepted for Spicer’s horrific mistake. We demand a full apology and a promise that these sorts of dangerous comparisons by the Trump administration are over.”

What is your take on the matter? Have his words been taken out of context or is the slip exposing latent anti-Semitism within the Trump administration? What should the consequences of his actions be?

Watch the cringe-worthy video of Secretary Spicer denying the atrocities carried out by Hitler during the Holocaust here:

Poverty in America Once Again Ignored in 2016 – Anti Media News