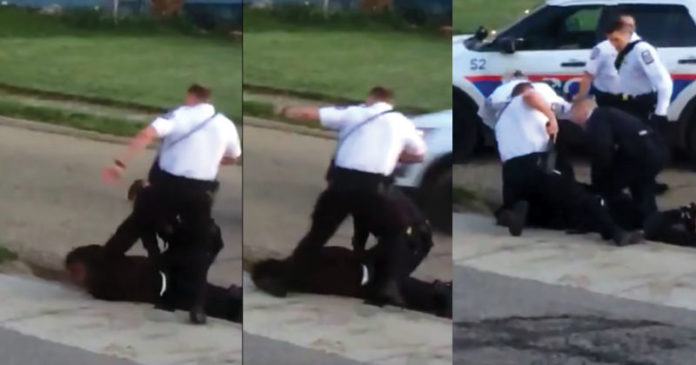 In case you have been distracted and forgot the struggle against police brutality, here is a video of a Columbus, Ohio cop, Zachary Rosen.

The video shows Rosen stomping on the head of Demarco Anderson while Anderson is already handcuffed and under control. Anderson is visibly restrained and does not appear to be agitated or resisting when Rosen charges from the left side of the frame and pounds his foot into the back of the suspect’s head with a force reminiscent of the skinhead curb stomping scene in American History X, reported The Root.

Anderson’s head hits the pavement so forcefully that it bounces back up. One can only surmise that at this point Rosen is dissatisfied with either the restrained man’s consciousness or ability to still breathe, because the police officer proceeds to kneel onto the hog-tied victim’s neck. Four other police officers do not seem disturbed by Officer Rosen’s actions, and make no effort to stop him.

After viewing the video, the Columbus Police Department issued a statement, saying, “Officer Zachary Rosen is under investigation for his actions that took place involving a suspect under arrest on Saturday, April 8, 2017. Officer Rosen has been reassigned to a non-patrol duty indefinitely.” It continued:

Based on what we’ve [seen] in the video taken on Saturday April 8, 2017, the action taken by one of our officers does not meet the standards by the Columbus Division of Police. […]

We’ll learn more as the investigation continues and take appropriate actions based on the facts gathered.

10TV reports that a grand jury declined to criminally charge this same officer last year for the shooting death of Henry Green.

The Police Department statement did not comment on how it planned on dealing with the four officers who stood idly by and watched Rosen assault the defenseless man.

Reassignment is not good enough for this abusive cop. He needs to be in jail for what he did.  Cops should not above the law.

We No Longer Have Three Branches of Government – Anti Media News