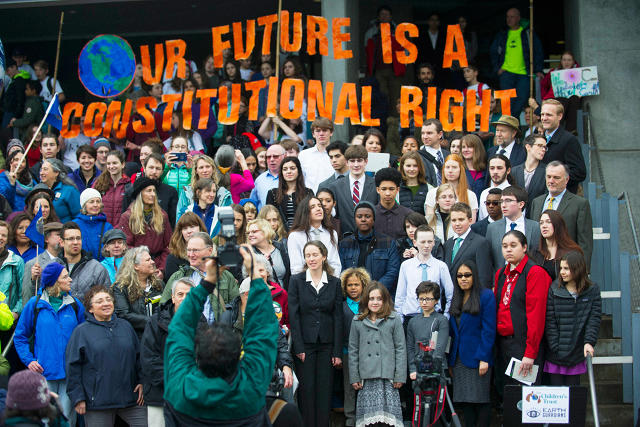 Even if Trump and his associates are hell bent on destroying the environment so they can have more money, the upcoming generation of youngsters is not taking it sitting down. They have shown they are willing to fight for their right to survive in a stable climate and they will continue to fight for it.

In a groundbreaking case, a group of 21 children and teenagers, ages 9 to 20, have won a landmark case that gives them the right to sue the US federal government for their right to a stable climate.

“I have no doubt that the right to a climate system capable of sustaining human life is fundamental to a free and ordered society,” says US District Court Judge Ann Aiken in a statement, the judge ruling on the case. “A stable climate system is quite literally the foundation of society.”

The judge’s ruling prevents the federal government from throwing out the kids’ argument and allows them to sue the government directly, reported Minds.

The group wants to hold leaders accountable for their short sighted, selfish decisions that destroy the environment for the next generations in favor of having more money for themselves.

“My generation is rewriting history,” Xiuhtezcatl Martinez, a 16-year-old plaintiff, declared. “We’re doing what so many people told us we were incapable of doing: holding our leaders accountable for their disastrous and dangerous actions.”

In a statement, James Hansen, a world-renowned climatologist at Columbia University, described the ruling as “a critical step toward a solution of the climate problem, and none too soon as climate change is accelerating.”

The case is called Juliana v. United States and is truly indicative of the power and intelligence of the youth of this country.

The case will likely go to the supreme court.

Saudi Cleric Claims Women Can’t Drive Becuase They Only Have a Quarter of a...