Home Injustice Elderly Man with Parkinson’s Disease Bloodied and Maimed by Police When his... 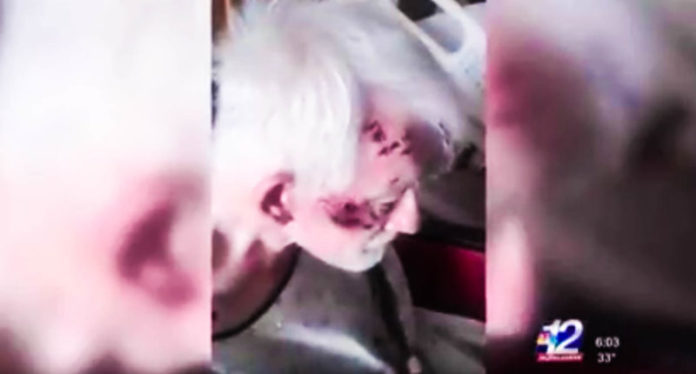 A Wisconsin man suffering from Parkinson’s disease has been left maimed and bloodied after his call to 911 for a medical emergency mistaken for a hostage situation. It is still unknown as to how the confusion unfolded, and how law enforcement had drawn out the situation for hours when it was simply a medical emergency. During a 56 minute long call Thomas Smith had indicated to the 911 dispatcher that he needed police and an ambulance, but a bomb squad was sent instead.

As reported by Brad Reed for Raw Story:

A Wisconsin man who called 911 seeking medical help was hospitalized after local police mistook his call for a hostage situation — then detained him after sending the bomb squad to his house.

Local news station WJFW reports that 65-year-old Rhinelander, Wisc., resident Thomas Smith called 911 late last week because he was having a medical emergency. Smith, who has Parkinson’s disease, is unable to speak, and thus had to respond to the 911 operator’s questions by pressing buttons on his phone.

This apparently led to confusion, as the operator interpreted Smith’s button presses as indicating he was being held hostage, instead of simply requiring medical help.

After this, a bomb squad team, special responders, and dozens of law enforcement officers rolled into his neighborhood. Authorities detained Smith until they realized he was seeking medical attention, at which point they gave him the necessary treatment.

However, Smith’s family is nonetheless upset with the way police handled the situation, as they said the police ended up injuring him in the process of detaining him.

“He point blank was trying to get help and it was taken way too far, and now my dad is in the hospital,” daughter Shannon Smith told WJFW.

“My dad does have cuts, scrapes on his head, a bump on his head, cut-up knees,” son Alan Smith told the station. “He did say he was forced down, he was slammed to the ground.”

Where do you think the responsibility should lie? In the misinterpretation of the 911 dispatcher, or the responding police officers who did not interpret the unfolding situation upon arrival to the scene? In the case of Tamir Rice, the little boy was killed due to the negligence of a dispatcher failing to inform police he was a minor with a toy gun- the dispatcher was reprimanded by a mere 8-day suspension. Should there be any recourse here, it is unlikely that any fair outcome will occur. Join the discussion and leave a comment below.

Michigan Residents Outraged That The State Might Sell Nestle 100 Million Gallons Of Water...