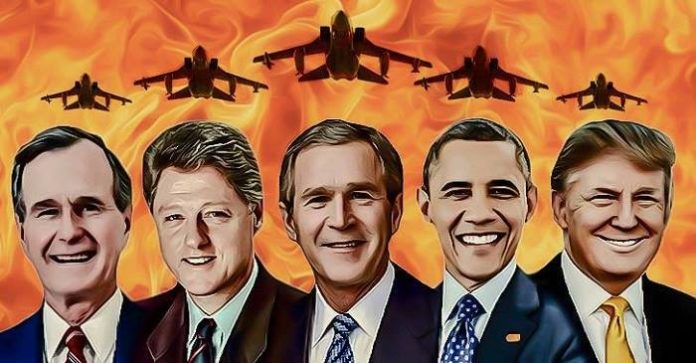 If you read closely between the warped headlines of the establishment media, you will eventually find the truth about Trump’s decision to strike the Syrian government: it was illegal.

Yet most mainstream media outlets clearly supported the strike. Many U.S. allies also supported the strike, including so-called peaceful countries such as New Zealand, which stated the strikes were a “proportional response to a specific incident – the chemical weapons atrocity.” New Zealand also said they would consider sending troops to Syria if the American government requested them.

Why isn’t the legality of Trump’s reckless move even on the table for discussion?

Is it because this is, yet again, no exception to the rule that — as history has shown us — the United States president has the ultimate right and authority to lead his country into war without congressional approval or approval from the United Nations?

How did this happen?

Following the wars in Vietnam and Korea, the War Powers Resolution was passed by both the House of Representatives and the Senate in 1973 as a means of curbing the ways by which the U.S. government could enter a war. Under the act, congressional approval must be obtained before the American president can commit the country to war. However, the fact that the president still has the power to launch a war for a 60-day period, following notification to Congress of the decision to commit U.S. armed forces to military action, still raises some questions regarding its effective application.

In 1999, under the presidency of Bill Clinton, the United States participated in NATO’s air war, which we were told was necessary in order to stop the Serbian ethnic cleansing campaign in Kosovo. (It is also worth mentioning that the International Criminal Tribunal for former Yugoslavia exonerated former Serbian president Slobodan Milosevic last year.) This operation did not have a resolution from the United Nations Security Council – one of two ways in which a country can go to war with another country (the other is self-defense).

Bill Clinton, a man who is often widely confused as some sort of humanitarian, also bombed a Sudanese pharmaceutical plant in response to bomb blasts at American embassies in Nairobi and Dar es Salaam. Clinton’s decision to strike a vital facility that produced medicine for a struggling Sudanese economy killed thousands between the death toll from the strike and the subsequent number of people who could no longer receive medical treatment). The reason we don’t know the full horror of this atrocity is because the U.S. vetoed a proposed investigation into the crime.

In 2001, the U.S. also launched an invasion of Afghanistan in response to the September 11 attacks. This was done without a specific U.N. Security Council resolution at the time because many viewed the act as one of self-defense. Yet no one seems concerned with the fact that the U.S. attacked Afghanistan in response to an attack that involved no Afghans, at least according to the CIA. Yes, al-Qaeda had a significant base in Afghanistan, but it was the U.S. that put them there in the first place.

In 2003, the U.S. launched another invasion, this time in Iraq. This did have U.N. Security Council resolutions in reference to the events preceding the invasion, but not any resolution that authorized force. In fact, many members of the Security Council were very explicit about this fact, including permanent member France (which holds a veto power).

“We will not allow the passage of a planned resolution that would authorise the use of force,” the French foreign minister said at the time.

Knowing they would never get a resolution that would explicitly or implicitly authorize force, the U.S. invaded Iraq anyway. The U.N. Secretary General stated quite unequivocally:

Fast forward a few years to peace prize laureate Barack Obama, who invaded Libya without Congressional approval in 2011. The U.S. war establishment downplayed America’s role in the Libyan war to try to justify its involvement yet conveniently missed the fact that America’s role was so integral it was deemed to be the “backbone” of any NATO offensive in the 2011 conflict.

Obama took these war powers further than any president before him. He waged covert wars and overt wars across so many countries that Bush and Clinton paled in comparison. In a six-year period, he bombed seven majority-Muslim countries. He also compiled a secret “kill list,” personally signing off on murders once a week. The weekly ceremony was aptly named “Terror Tuesdays.” During the tenure of Obama’s drone strike assassination program, he also terminated American citizens without trial.

Most notable, however, is Obama’s push to bomb Syria in 2013, which largely fell through due to mounting public opposition and even a lack of support from some of America’s closest allies. His proposal collapsed completely when Russia intervened diplomatically to provide an alternative solution.

Never one to admit defeat, Obama found backdoor access to bomb Syrian territory a year later when the terror group ISIS made headlines with the ruthless and barbaric havoc they were unleashing throughout Iraq and Syria.

Yet how much of this involved the domestic democratic process? Did Congress approve a bombing campaign in Syria? Did the U.N. approve America’s decision to bomb a sovereign country? Did the host country invite the American air force into Syrian territory?

The answer to all of these questions should be clear to anyone who has been paying attention. None of these actions have any democratic accountability. The only thing the Trump administration learned from this debacle in 2013 was not to give the public or the international community any time to respond and to immediately launch air strikes while eating dessert with Syria’s quasi-ally. In that context, Trump has expanded the war powers even further than Obama, who was at least subject to many domestic and international constraints at the time, whether intentionally or not.

In full preparation of these developments, Anti-Media released an article in December 2016 entitled “The War Powers Trump Is About to Inherit from Obama Are Scary as Hell.”

The warning has apparently fallen on deaf ears. The most terrifying aspect of this horrific reality is that this expansion of the presidential war powers has been manufactured on purpose because Congress has never taken any significant action against the president for violating the rules of war. As noted by journalist Glenn Greenwald:

“What happened to Obama as a result of involving the U.S in a war that Congress had rejected? Absolutely nothing, because Congress, due to political cowardice, wants to abdicate war-making powers to the President. As a country, we have decided we want an all-powerful president – one who can bomb, and spy, and detain, and invade with virtually no limits. That’s the machinery of the imperial presidency that both parties have jointly built and have now handed to President Trump.”

Let that sink in: the war powers have been designed to rest with the president. In our present circumstances, a president who orders raids deemed too risky by his warmongering predecessor says he will look Syrian kids in the face and tell them they can’t come to America. That predecessor just killed over 1,000 Iraqis last month in a ramped up operation that even the New York Times admits has “no endgame in sight.”

These war powers have been used, misused, and abused for decades, ultimately paving the way for Trump to do what he did last week: bomb a Russian ally directly without any democratic institutional authority – or authority from the international institution that supposedly governs peace and war – risking an all-out war with a nuclear power.

This isn’t a problem of Obama versus Trump or Bernie Sanders versus Hillary Clinton. The president has too much power, regardless of who sits on the throne.

Anyone who attempts to justify this power could realize how nonsensical and dangerous it is by replacing all references to the United States above to North Korea and seeing how that fits their worldview.

If one country can take these actions unilaterally, then so can others.

Is this the world we want to live in?