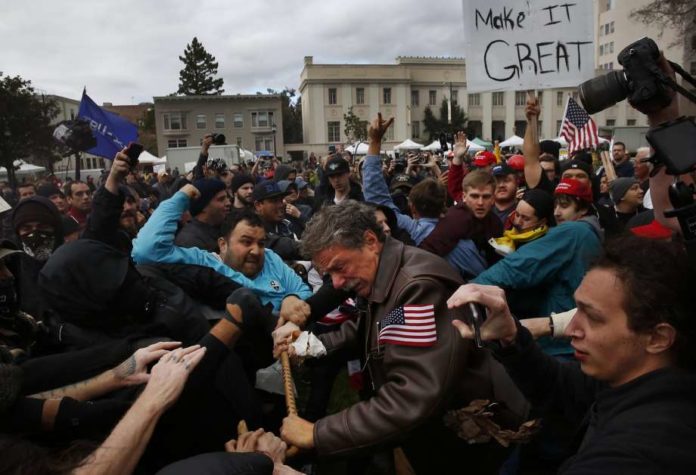 Demonstrators for and against President Trump had a massive brawl in Berkeley, CA Saturday.

Berkeley Police issued a statement that said, “A large number of fights have occurred and numerous fireworks have been thrown in the crowds,” Berkeley police said in a statement. “There have also been numerous reports of pepper spray being used in the crowd, ” reported CNN

The Berkeley protest began as a so-called “Patriot’s Day” rally of Trump supporters, but counter-demonstrators quickly gathered and much confrontation ensued.

Warning: GRAPHIC VIOLENCE (spoiler alert: yes, you do get to see Nazi salutes from Trump supporters.

Protesters gathered around the country on Saturday to protest the actions of the Trump administration and demand he show his tax returns like all other president’s have.

Social media was flooded with great videos and pictures of the event:

Soros funding groups inside the United States like #Resist who hired paid protesters and caused violent riots like #Berkeley pic.twitter.com/WMfpJMVNao

All this….. for what…. We fight. The elites laugh.⚡ Pro and anti-Trump protesters clash at rally in Berkeleyhttps://t.co/qgxwKo6fWi

What a mess. Still have yet to see a single officer… #Berkeley pic.twitter.com/kUp9Lv0Udd

The far right are usually violently condescending toward women & afab people. In #Berkeley @NathanDamigo of @IdentityEvropa was just violent pic.twitter.com/yfVkHsxBr9