Home Government “Get ‘em out of here!” – Anti Media News 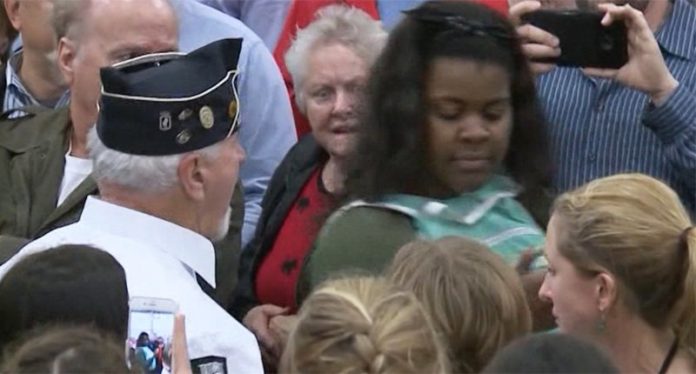 Alvin Bamberger, a 75-year-old Ohio man accused of attacking a black woman during a Trump rally last March is claiming that he was “acting at the behest of the then-candidate”. His attorneys assert that he was caught up in the frenzy, and when Trump announced: “get ‘em out of here!”- he felt compelled to participate and do his part. Now dealing with harassment charges, he has voiced his regret and blames the words of the President as a  catalyst for his violent outburst.

Attorneys for a Ohio man who is accused of attacking a black woman at a Donald Trump campaign rally last March claimed their client was acting at the behest of the then-candidate.

According to the Guardian, Alvin Bamberger, a 75-year-old Ohio resident and a member of a veterans association, is  charged, along with two other Trump boosters, with harassment over the attack on Shiya Nwanguma, .

In video taken at the March rally, Bamberger, Matthew Heimbach and Indiana resident Joseph Pryor can be seen shoving and lashing out at anti-Trump protester Nwanguma after Trump urged the crowd on, telling them, “get ‘em out of here!”

According to University of Louisville student Nwanguma, as she was assaulted she was also being verbally abused, explaining, “I was called a n****r and a c*nt and got kicked out. They were pushing and shoving at me, cursing at me, yelling at me, called me every name in the book. They’re disgusting and dangerous.”

As part of his defense, Bamberger’s  attorneys stated that their client, “admits only that he touched a woman,” but pinned the blame on Trump.

Trump’s words both past and present, put people (especially those in marginalized communities) in harm’s way. This incident is only one of the many. His supporters and fans have time and again have said that the President’s words were their motivation behind bigoted, violent acts claiming that they felt compelled to do so for the President, for America. Trump, however, seems to wash his hands clean of any responsibility and for this suit and future legal proceedings he is “immune from suit” and can do and say as he pleases simply because he is President of the United States.

According to the attorneys, if Bamberger is found liable, Trump or his campaign are also to blame “because Trump and/or Trump campaign urged and inspired Bamberger to act as he did.”

Additionally the president’s legal team stated  Trump’s “get them out of here” remark was not directed at the crowd.

Bamberger previously admitted his involvement, saying the president had inspired him and he was “caught up in the frenzy.”.

“Trump kept saying ‘get them out, get them out’ and people in the crowd began pushing and shoving the protesters,” he wrote in a letter to a veterans association. “I was caught up in the frenzy. I physically pushed a young woman down the aisle toward the exit, an action I sincerely regret.”

How much responsibility for Bamberger’s acts lies with the President, and his speech enticing violence at his rallies? Should the sole blame lie with Bamberger- and is he just trying to pass the buck? What are your thoughts on Trump being immune to litigation simply because of the position as POTUS?  Share your thoughts with CCN  in the comments section below.

Here you can view footage of the rally where Nwanguma is shoved violently over and over by Bamberger, to the chants of USA! USA! and a cheering crowd.