Home News JFK’s Nephew Blows The Whistle On Syria — ISIS Is A Product... 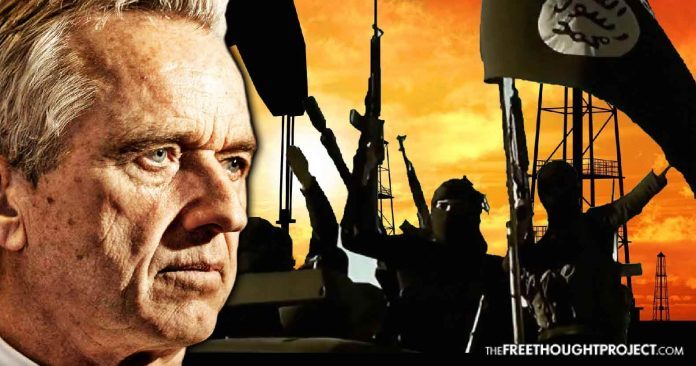 Robert F. Kennedy Jr. delivered a searingly astute summation concerning the truth behind the U.S.’ presence in the Middle East — its subservience to the fossil fuel industry’s most precious commodity: OIL.

“As we focus on the rise of ISIS and the search for the source of the savagery that took so many lives in Paris and San Bernardino, we might want to look beyond the convenient explanations of religion and ideology and focus on the more complex rationales of history and oil, which mostly point the finger of blame for terrorism back at the champions of militarism, imperialism and petroleum here on our own shores,” Kennedy advised in an editorial for Ecowatch.

Kennedy’s critical look at the United States’ history of meddling, interventionism, and hegemony — almost exclusively to maintain the flow of oil — makes apparent its role in destabilizing the entire Middle East, particularly Syria. Indeed, more than fifty years of violent intercession — ultimately in the interest of the fossil fuel industry — has stoked enormous resentments. Essentially, American geostrategic corporatism — under the guise of militaristic peacekeeping — created the same violent Islamic Jihadism the U.S. now battles against.

Beginning during the Eisenhower Administration, Arab sovereignty and the Middle East nations’ Cold War neutrality were perceived as threats to American access to oil.

First in the order of business for Eisenhower’s Presidency was Iran’s first elected leader in 4,000 years, President Mohammed Mosaddegh. Mosaddegh’s desire to renegotiate Iran’s unfavorable oil contracts with British Petroleum led to a failed coup by British intelligence — whom he promptly expelled from the country. Despite Mosaddegh’s favorable view of the U.S. — a model of democracy he sought to employ for Iran — Eisenhower, with the aid of the notorious Allan Dulles, ousted the leader. “Operation Ajax” deposed Mosaddegh and replaced him with Shah Reza Pahlavi — a leader whose bloody reign culminated in the Islamic revolution of 1979 “that has bedeviled our foreign policy for 35 years,” Kennedy wrote.

Perhaps one of the larger threats lay in Syria’s reluctance to approve the Trans Arabian Pipeline — intended to cross Syria in order to connect Saudi oil with ports in Lebanon. When the democratically-elected, secular Syrian president balked, the CIA engineered a coup in an attempt to replace him.

“The CIA’s plan was to destabilize the Syrian government, and create a pretext for invasion by Iraq and Jordan, whose governments were already under CIA control,” explained Kennedy. It did not work. An astonishing failure, anti-American riots and violence erupted across the region. Syria barred several American attaches, and then outted and executed all officials who harbored pro-American sentiment. Indeed, the U.S. very nearly sparked all-out war with Syria over the incident.

Repercussions from that attempted coup — as well as more successful installments of puppet regimes elsewhere — still play out in foreign policy and geopolitical dealings in the present. A more ‘successful’ leader removal and replacement involved a name everyone in the U.S. is familiar with: Saddam Hussein.

After failed attempts to depose Iraq’s leader, the CIA ultimately installed Hussein and the Ba’ath Party to power. As Kennedy noted, Interior Minister Said Aburish once said of that plot, “We came to power on a CIA train.” James Critchfield, the CIA Station Chief in charge of the both the successful and failed coups, later said the CIA had essentially “created Saddam Hussein” — also supplying him weapons, intelligence, and chemical and biological weapons.

“At the same time, the CIA was illegally supplying Saddam’s enemy — Iran — with thousands of anti-tank and anti-aircraft missiles to fight Iraq, a crime made famous during the Iran Contra scandal … [M]ost Americans are unaware of the many ways that ‘blowback’ from previous CIA blunders has helped craft the current crisis.”

While Americans widely believe the mainstream press’ and governmental narrative that the current U.S. role in Syria amounts to humanitarian goals, beginning with the Arab Spring in 2011, “Instead, it began in 2000 when Qatar proposed to construct a $10 billion, 1,500km pipeline through Saudi Arabia, Jordan, Syria, and Turkey,” Kennedy explained.

“The proposed pipeline would have linked Qatar directly to European energy markets via distribution terminals in Turkey which would pocket rich transit fees. The Qatar/Turkey pipeline would have given the Sunni kingdoms of the Persian Gulf decisive domination of world natural gas markets and strengthen Qatar, America’s closest ally in the Arab world.”

The E.U. currently gets 30 percent of its gas from Russia, Kennedy noted, and “Turkey, Russia’s second largest gas customer, was particularly anxious to end its reliance on its ancient rival and to position itself as the lucrative transect hub for Asian fuels to E.U. markets. The Qatari pipeline would have benefited Saudi Arabia’s conservative Sunni Monarchy by giving them a foothold in Shia dominated Syria […]

“Wikileaks cables from as early as 2006 show the U.S. State Department, at the urging of the Israeli government, proposing to partner with Turkey, Qatar, and Egypt to foment the Sunni civil war in Syria to weaken Iran. The stated purpose, according to the secret cable, was to incite [Syrian President Bashar al-] Assad into a brutal crackdown of Syria’s Sunni population.

“As predicted, Assad’s overreaction to the foreign-made crisis — dropping barrel bombs onto Sunni strongholds and killing civilians — polarized Syria’s Shia/Sunni divide and allowed U.S. policymakers to sell Americans the idea that the pipeline struggle was a humanitarian war.”

Kennedy’s lengthy historical context for the current imbroglio absolutely warrants a thorough perusal. Its unmistakable message should serve as a critical reminder that the United States government and its mouthpiece in mainstream press — as convincing as they may seem — are never telling you the whole story.
By: Claire Bernish From:The Free Thought Project

Pasco Needs To Better Train Officers In Use Of Force: Feds Finish Review of...

Trooper that Choked an Ambulance Driver and Got to Keep Job, In Hot Water...