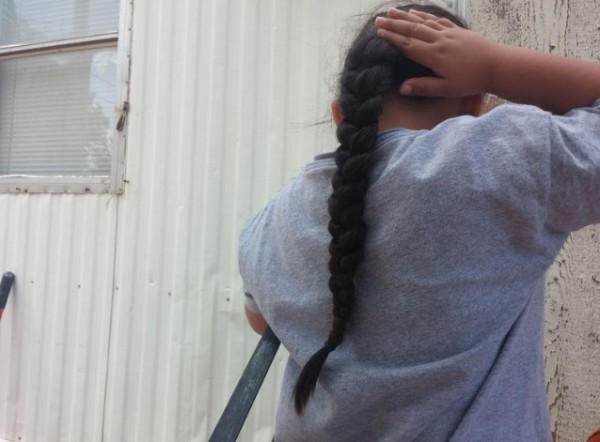 Malachi Wilson’s parents are Navajo and Kiowa, and they believe that their 5 year-old son’s hair is sacred and should not be cut. So Wilson arrived for his first day of kindergarten last week with his long hair in a braid. The principal at F. J. Elementary School in Seminole, Texas promptly send Wilson home, saying that he was not allowed to attend school with long hair because he is a boy.

Principal Sherrie Warren told Malachi’s mother, April Wilson, that he would not be able to come to school until he got a haircut. When April protested by noting her Native American religious beliefs, Warren asked her for to prove that Malachi is, indeed, a Native American.

Eventually, Warren backed down after April agreed to sign a form explaining why her son has long hair. Malachi Wilson was allowed to attend his second day of school. Even so, the school’s decision to deny him a single day of his education almost certainly violated the Constitution and Texas law.

For one thing the Fourteenth Amendment’s guarantee that “[n]o state shall … deny to any person within its jurisdiction the equal protection of the laws” prohibits gender discrimination unless the state offers an “exceedingly persuasive justification” for doing so. It is unlikely that Malachi’s Wilson’s school could offer such a justification for only allowing girls to grow their hair long.

The First Amendment also protects Malachi’s right to wear his hair long, especially because his long hair is an expression of his family’s beliefs and ethnic heritage. As the Supreme Court held in Tinker v. Des Moines Independent Community School District, a school may typically only suppress a student’s free expression when it can show that the expression would “materially and substantially disrupt the work and discipline of the school.” Again, it is difficult to imagine how a single student’s hair could create such a disruption.

Additionally, Texas law provides robust protections for the free exercise of religion. Although the Texas law sensibly departs from federal law by explicitly providing that religious liberty claims generally cannot be used to overcome civil rights law, the only civil rights at stake in Malachi’s case is his own right to attend school without having to change his hair. So it is likely that the school violated Malachi’s rights under Texas law when it sent him home from school, in addition to committing several violations of the Constitution.