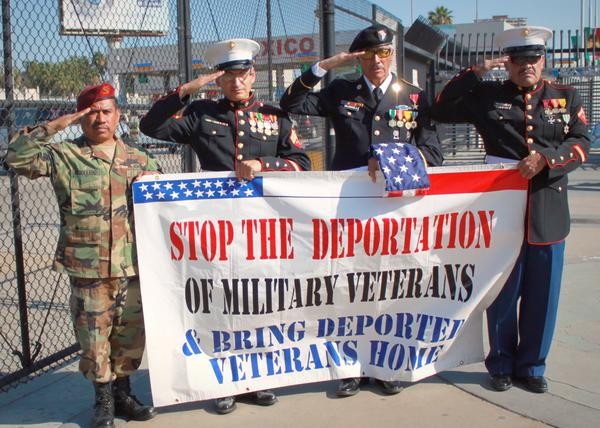 A California Governor has become the first to have granted pardons to veterans who have been deported. Governor Jerry Brown pardoned Erasmo Apodaca, Marco Antonio Chavez, and Hector Barajas all previous residents of California when they committed their crimes, and now currently residing in Mexico- hours before Easter Sunday. Governor Brown rationalizes that the veterans who were deported after serving out their prison sentences in the state have paid the price for their crimes and the separation from their families coupled with their deportation has been the worst price of all.

As reported by Fusion:

The three veterans pardoned hours before Easter Sunday were living in California when they committed their crimes. The veterans have been in lengthy legal challenges in effort to return to their families in the U.S., and advocates say the pardons will help pave the way for their eventual return to the country they took an oath to defend.

Erasmo Apodaca served in the U.S. Marines and was deployed during Operation Desert Storm and was convicted in December 1996 of stealing about $500 worth of goods from an ex-girlfriend’s house. Apodaca served 10 months in prison and was deported in 1997 after serving his sentence, according to the ACLU of California, which was part of a coalition of groups that submitted the pardon requests on behalf of the deported veterans.

Marco Antonio Chavez was enlisted in the Marine Corps. and served honorably for four years. In 1998, he was convicted of animal cruelty. He was deported in 2002 after serving 10 months in prison and parole for another year.

Hector Barajas, 40, served as a paratrooper in the 82nd Airborne Division of the U.S. Army during Operation Desert Storm and was convicted of shooting “at an inhabited vehicle” in 2002. The governor said Barajas served about a year in prison and another year parole before he was deported in July 2004.

He is the most outspoken of the three deported veteran and has been the subject of dozens of news stories, including a 2014 article published by Fusion. He’s also the founder of Deported Veterans Support House, a resource center and shelter in Tijuana.

“It’s reassuring that people are going out of their way to figure out how to get deported veterans back home,” Hector Barajas told Fusion in a telephone interview this weekend.

The governor said the veterans have earned their pardon and have paid their debt to society and are deserving of the unconditional pardon for both their service and time served.

Barajas said a coalition of advocates and attorneys collectively known as Honorably Discharged, Dishonorably Deported submitted the request for pardon on his behalf. He said in total, four pardon applications were submitted and it’s unclear why one of them was denied.

“Hector Barajas, Erasmo Apodaca, and Marco Antonio Chavez Medina long ago paid their price for their mistakes, but their deportation has been the worst price of all, as they have been permanently separated from their families and the only country they knew,” Jennie Pasquarella, a senior staff attorney with the American Civil Liberties Union of California, said in a statement.

About 35,000 non-citizens currently serve in the U.S. military, and approximately 5,000 permanent resident aliens (or green card holders) enlist each year, according to the Department of Defense. Undocumented immigrants can’t join the military but legal permanent residents who enlist can apply to become naturalized U.S. citizens as soon as they graduate from basic training. Generally, permanent residents have to wait several years before they can apply for a lengthy citizenship process.

While this may be the case the military conveniently has failed to provide the  “adequate resources and assistance to ensure service members were naturalized during military.” We’ve reached out to U.S. Citizenship and Immigration Services (USCIS)—the agency responsible for proving immigration assistance and resources to military service members—for comment and will update if we hear back.

As the ACLU has stated: “We’ve reached out to U.S. Citizenship and Immigration Services (USCIS)—the agency responsible for proving immigration assistance and resources to military service members—for comment and will update if we hear back.”

The ACLU report found there are at least 239 U.S. veterans who have been deported, though they say the number is likely much higher.

In a cruel twist of irony, the only way deported veterans can return to the U.S. is once they’ve died so they can be buried at a U.S. military cemetery.

Do you think the veterans are deserving of the full pardon granted to them by Governor Brown? Now that they have had their pardon, should the military they once risked their lives for work towards giving them the naturalization they deserved in the first place? Share you thoughts in the comment section below.

Men Try To Sexually Assault Woman, Then Beat Her In Public For Resisting [Watch]...