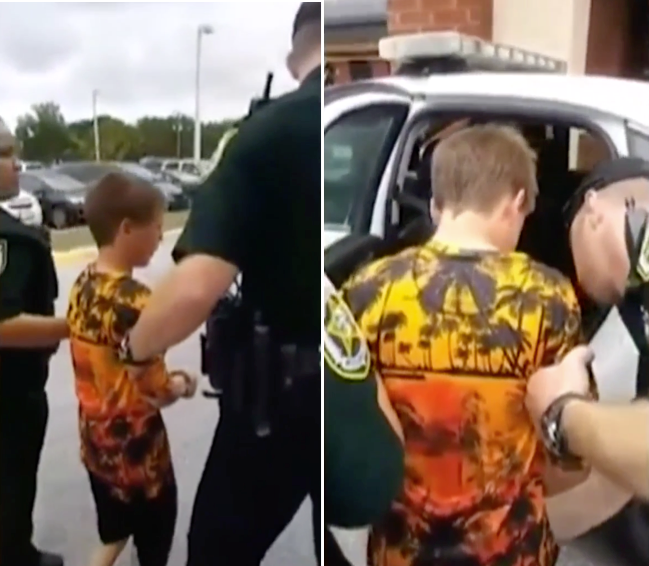 An autistic ten-year-old boy has spent the night behind bars after being apprehended for having an outstanding warrant for his arrest for allegedly kicking a teacher of his the previous year. Upon his return to school, a resource worker notified authorities who then responded by arresting the boy amidst much confusion for the boy and his mother- who filmed the whole incident on her cell phone.

In the harrowing video, the young boy is cuffed in front of his peers and led out of the school by law enforcement. His mother explains that the boy has autism- to no emotion, sympathy or reply from the arresting officers. If this is how children with mental health issues are treated by the law, it is scary to think what officers deem acceptable conduct towards adults suffering from mental health ailments.

As reported by Nina Golgowski for the Huffington Post reports:

A mother watched with horror as deputies in Florida arrested her 10-year-old son with autism at school last week for an incident she said took place last year.

Luanne Haygood filmed her son’s April 12 arrest on her cell phone, capturing him crying out in confusion as Okeechobee County Sheriff deputies handcuffed him and led him to a sheriff’s vehicle.

“I don’t know what’s going on, mama!” the little boy shouted as his mom tried to get answers from the deputies.

“He has autism. He doesn’t know what’s going on,” Haygood is heard telling the deputies.

Haygood, who spoke with CBS 12 News, said her son spent the night behind bars.

According to her, deputies arrested the child after a school resource officer identified him as having an outstanding warrant for assault ― something that Haygood is heard saying in the video that they weren’t aware of.

Her son allegedly kicked a teacher last fall and had recently returned to school on Wednesday for mandatory testing after being homebound. Haywood says this behavior is related to him having autism.

The charge is a third-degree felony.

The incident highlights how even children are not safe from the callousness and cold treatment law enforcement imposes of those they deem criminal- especially those suffering from mental illness. While the officers involved claim to not have known the boy was on the spectrum, upon receiving this information, they had the obligation to look into the validity of the claims in order to assess the incident appropriately. In what world is putting a small child, mental illness or not, a feasible means of discipline for allegedly kicking their teacher?

Do you think officers overreacted in this case? What would have been the appropriate way to deal with the boy other than having him arrested and spending a night behind bars? Do you think sensitivity training for the officers involved would be of help for similar situations in future? Sound off in the comments section below.