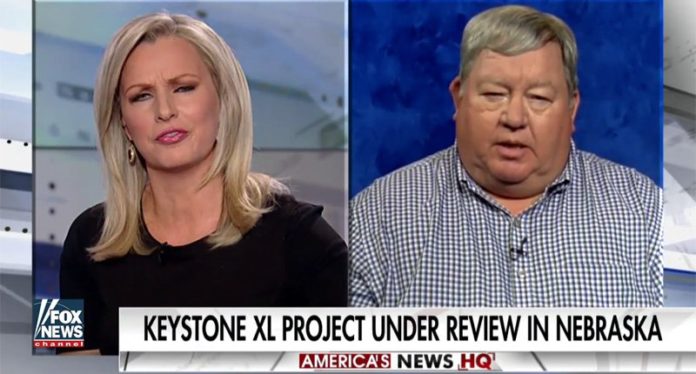 In an interview with Sandra Smith from Fox News, a Nebraska farmer squashed her ridiculous notion that the Keystone XL pipeline President Donald Trump is reviving will make America energy independent.

Nebraska farmer Art Tanderup owns a 160 acre farm outside of Neligh, NE and will be negatively affected by the pipeline.

Smith started by trying to make Tanderup feel inferior as she called his farm “small” and noted it was passed down through his wife’s family. Then she claimed the Keystone XL pipeline would make America energy indenepdent.

Tanderup explained the oil in the Keystone XL pipeline would only travel through America, allowing Canadian Tar Sands to be processed and then exported.

“But it’s going across America to be refined and exported, which is not for America’s use,” Tanderup explained. “If they do not mix some high-quality crude with this, the best they get is poor-grade diesel fuel, which we can’t even burn in this country.”

During the interview Fox also made the false claim that the pipeline would create 42,ooo jobs and as many as 500,000 jobs by 2035.  The truth is the pipeline will create thousands of very temporary jobs, and there will be about 35 permanent jobs according to expectations.

For years, Art Tanderup has been a burr in the saddle of TransCanada Corporation efforts to build the pipeline. In 2014, Tanderup traveled to Washington, DC as part of the Cowboy Indian Alliance against the KXL pipeline and his farm hosted a 10,000 attendee concert with artists Neil Young and Willie Nelson.

You can watch the video here.