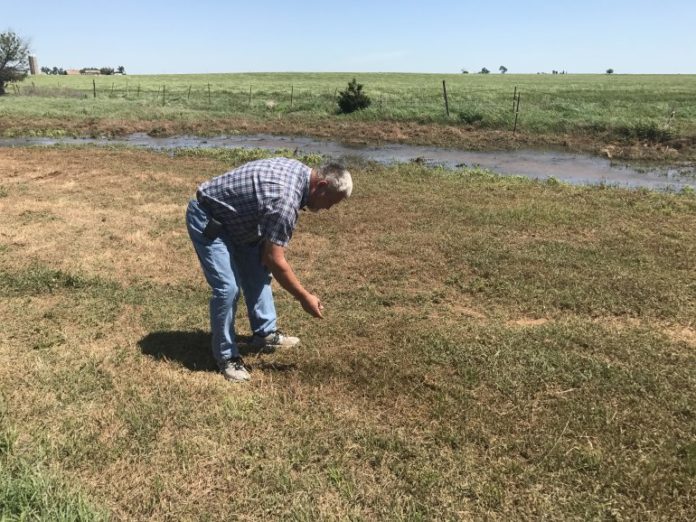 An Oklahoma farming family had a large chunk of their land devastated by another inevitable oil leak. One of the company employees, wearing a hazmat suit, even told the landowner the oil spill is good for the soil.

State and federal agencies are investigating what caused a crude oil pipeline to leak thousands of gallons of oil onto surrounding farmland in Kingfisher County last week, reported KFOR.

The Oklahoma Corporation Commission (OCC) notified the federal government about the spill Friday afternoon, according to the National Response Center. Follow up reporting to the NRC Sunday listed ‘internal corrosion’ as the likely cause of the discharge of approximately 450 barrels (18,900 gallons) of crude oil from the Buffalo Cashion pipeline, owned by Houston-based Plains All American Pipeline, L.P.

“We are following our emergency response plan, and our staff is working with regulators and affected landowners. Our current priorities are to ensure the safety of all involved and limit the environmental impact of the release.”

The video shows dozens of workers in yellow hazmat suits were at the farm Monday, removing the section of faulty pipe and collecting contaminated grass and crops.

“I told my wife this morning it looked like (the characters from the cartoon film) ‘Minions’ had all come out, all of a sudden,” said wheat farmer and cattle rancher Steve Pope.

Pope estimates he’s lost about 120 acres of pasture and wheat crop from the spill.

“Luckily, we hadn’t put (cattle) out here yet. We were fixing to turn cattle out on this grass,” Pope said. “One of the head guys was telling me, ‘Oh, this is so good for the soil,’ and, like I told him, I said, ‘Well, why is everybody wearing a hazmat suit?’”

“Yeah, it’s pretty strong over there,” Pope said, pointing out the window of his truck as he drove along the property. “It just smells like it’s got a diesel smell – smells like diesel you’d put in your tractor.” 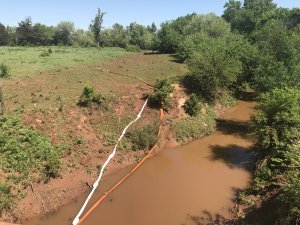 The Cooper Creek, with oil booms crossing the water, is seen in Loyal, Oklahoma after a pipeline leaked nearly 20,000 gallons of crude oil onto nearby farmland on April 21, 2017. (KFOR/Bill Miston)Plains and the OCC claim the oil is contained to Pope’s fields, an unpaved road and stopped short of nearby Cooper Creek, which feeds into the Cimarron River.

Pope does not believe the oil companies claim that oil did not make it to the creek, considering the leak was discovered after the heavy rains last Thursday night into Friday.

“There’s probably only another 800 or 900 feet to Cooper Creek so, if it got to the end of our property, I don’t see how it couldn’t have (reached the creek),” he said.

This is not the first pipeline problem Plains All American Pipeline has experienced. According to data from the U.S. Department of Transportation’s Pipeline & Hazardous Materials Safety Administration (PHMSA), Plains had more than 25 pipeline incidents in the state of Oklahoma, dating back as far as 2006; 14 listed corrosion as a cause, six coming from material, welding or equipment failures.

Plains has also been subject to a federal lawsuit for violating the Clean Water Act.

The U.S. EPA said more than 270,000 gallons of crude oil leaked from Plains pipelines and one tank, into navigable waterways or nearby waters, between June 2004 and September 2007.

In 2010, Plains agreed to pay $3.25 million in penalties in connection to the 10 spills in Texas, Louisiana, Kansas and Oklahoma.

Plains operate more than 1,300 miles of pipeline in Oklahoma, second to Texas’ 3,500 miles.

The inspection or service history of the Buffalo Cashion pipeline is unclear; requests for historical information from the company haven’t been returned.

While Pope is concerned about his fields and his herd, he’s also concerned about what may happen to the EPA, now led by former Oklahoma Attorney General Scott Pruitt, if President Donald Trump moves forward with the proposed cuts to the agency.

“What bothers me is we keep seeing the EPA being cut so much,” Pope said. “A lot of the regulations that have been put on the oil companies are there for a reason. Sure, there are probably some that are over-regulated but, without those regulations, I wonder if I would have had as quick of a response for guys to come out here and start cleaning this up.”

With so many oil spills and the destruction of the EPA, Pope’s concerns should be everyone’s concerns.  Oil companies have not had a history of being ecologically responsible, even with the EPA regulations.  When there are big oil spills in major waterways, there will be nothing to make the companies clean up their mess. So we will all be at the mercy of oil companies who have historically put profits over people. A very recent example is the DAPL pipeline, where thousands of protesters were assaulted by police in the name of profits for an oil company. The company even hired people to use unlicensed attack dogs on unarmed protesters as pipeline workers destroyed burial grounds and sacred land.