Home News Big Oil Now Has Authority To Arrest You For Protesting A Pipeline... 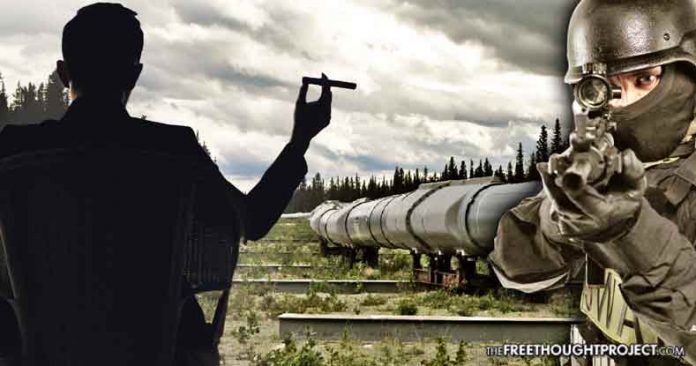 If you’re a resident of Huntingdon County unfortunate enough to have your property in the path of Sunoco’s Mariner East 2 pipeline, you can forget protesting — unless arrest and jail time aren’t an issue for you.

Common Pleas Court Judge George Zanic signed a rare and factious “writ of possession” order last week in favor of Sunoco, which had sought an “emergency measure” to thwart landowners protesting pipeline construction by occupying trees — on their own property.

In short, protesting encroachment of this pipeline on one’s own property will earn an arrest.

“We’re seriously looking at going to jail,” Elyse Gerhart told NPR. “I’m not the type of person who lets injustice go unchallenged, and neither is my mother. What we’re doing makes [Sunoco] show their true face.”

“Ellen and Stephen Gerhart in Huntingdon, Pa., along with their daughter Elyse, have become outspoken critics of the pipeline and the use of eminent domain by the company to take possession of land along the 350 mile route.

“Charges against Ellen Gerhart were dropped after she was arrested last year for trespass on her own property. But with this new writ, Sunoco can enlist law enforcement to arrest anyone within the easement, including the actual property owners.”

Sunoco, in no uncertain terms, has garnered the full weight of support via force of the U.S. government against the interests of citizens who have done literally nothing else wrong but have their properties awkwardly situated where Big Oil wants its pipeline to run.

Elyse Gerhart took to the trees in early February with an unknown number of others facing similarly offensive corporate actions, after the unironically monikered Department of Environmental Protection granted permits for Sunoco to begin construction of Mariner East 2.

As the Gerharts’ attempt to stave off the corporo-government’s eminent domain seizure of private property winds its way through courts, Judge Zanic’s order effectively quashes any remnants of effective protest the landowners had at their disposal — rendering moot their objections in favor of Sunoco’s plans to complete its pipeline until court proceedings play out.

Given the extreme measures ETP employed against the Standing Rock Sioux Tribe and supporting Indigenous and non-Native water protectors from around the globe — who were camped in opposition to DAPL for months near the banks of the Missouri River’s Lake Oahe reservoir — the move to usurp law-abiding civilians’ private property hardly comes as a shock.

Indeed, the pompousness of corporate theft of property under the already-contentious governmental program known as eminent domain seems par for the course for Big Oil — particularly now that industry darling, Donald Trump, occupies the White House.

Occupying treetops on their own properties has already led to the sort of disputatious confrontations, albeit on a smaller scale, which brought international scorn to the Dakota Access Pipeline Project. Although charges were ultimately dropped, authorities arrested Ellen Gerhart last year — for trespassing on her own property.

Attorney Rich Raiders is representing the Gerhart family in its challenge of eminent domain, and noted the court’s use of ‘writ of possession’ is “very rare and very unusual.”

A writ of possession technically allows authorities to seize control of everything you own — giving you and everyone in your household limited time to vacate the premises.

Twenty-seven acres of forests and wetlands comprise the Gerharts property in Huntingdon County, and the family has thus far stood resolute in refusing to voluntarily grant an easement and its 50-foot wide right-of-way with additional 25-foot staging area for the Mariner East line.

In their appeal to the Commonwealth Court, the family argues, in part, Sunoco’s planned liquid natural gas pipeline — “which would carry ethane, propane and butane from the Marcellus Shale to an export terminal in Delaware County” — is not in the public interest.

A common defense against eminent domain, any company arguing for seizure and use of private property normally bears the brunt of proving necessity and public interest — Sunoco, in this instance, claims Mariner East 2 would deliver needed heating oil to parts of Pennsylvania. Mariner East 1, the Gerharts and their attorney rebuff, already supplies what is needed — the second line is redundant and unnecessary.

In an email response to that claim, Sunoco spokesman Jeff Shields asserted the writ of possession holds to the confines of the law, telling StateImpact,

“We are proceeding with construction in Huntingdon County and elsewhere and will conduct ourselves according to the law at all times.”

As with Energy Transfer Partners’ horrendous steamrolling of Native American rights concerning the justifiably maligned Dakota Access Pipeline, that black-and-white simplistic view of Big Oil’s manifest rights hardly comes as a shock — though its might makes right attitude has won no favor with landowners who otherwise couldn’t care less about the exploits of the industry.

This writ of possession and its granting authority to arrest property owners on their own land should they not permit notoriously faulty oil and gas infrastructure to impede in their lives proves yet again the government’s subservience to corporate industry over the rights of people supposedly governed.

And as Big Oil finds new impunity to run roughshod where it sees fit, that legality does not equal morality has never been more clear.
By: Claire Bernish   From: The Free Thought Project