Home News Flint Threatens To Kick 8,000 Families Out Of Their Homes If They... 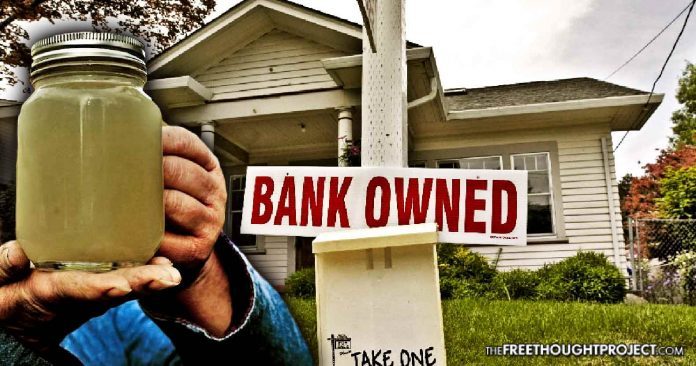 Flint, MI — By now, nearly everyone knows multiple government officials in Michigan knowingly poisoned thousands of men, women, and children after the city switched its municipal water source from the Detroit water system to the Flint River. Now, however, as if poisoning residents and their children weren’t enough, the city of Flint is threatening to take people’s homes for refusing to pay for the tainted water.

Although Flint — which blew wide open a year ago — is largely out of the headlines, the crisis is still unfolding. Residents are still unable to drink the water, leaving most families to rely on bottled water for everything from brushing their teeth to cooking and bathing.

In spite of multiple officials facing criminal charges, there hasn’t been a single conviction. The only people to face any consequences thus far, over the atrocity in Flint, are the citizens who are forced to pay for unusable water.

After the city made the switch in 2014, Melissa Mays, 37, said her and her family began developing rashes and their hair started to fall out. Her neighbors all had the same issues. Once she realized it was their tap water, Mays turned into a clean water activist.

Since discovering she, her husband, and her three children had all been poisoned by the water coming out of their tap, Mays stopped paying her water bill. Now, the city who poisoned her is threatening to take their home if she continues to refuse to pay for poison water.

“I got scared, for probably the first time since this all started, this actually scared me,” said Mays.

As NBC 25 reports, Mays received the notice in the mail Friday stating that she must pay nearly $900 by May 19 to avoid a lien being placed on her property.

The Mays are not the only family who stands to lose their home for refusing to pay for tainted water either. In fact, over 8,000 people got a notice this week just like the one Mays got.

For those who refuse to pay their bills in full by May 19, they city will foreclose on their homes and take them.

Mays will now have to compromise her principles to avoid having the government steal her home.

“While I understand this is the way the law reads we are in a totally different situation,” said Mays, noting that she’d been poisoned.

Government officials remain entirely unapologetic. In spite of the EPA awarding a $100 million grant to the Michigan Department of Environmental Quality to fund drinking water infrastructure upgrades in Flint, city leaders say they need the money.

Mooney says the shut offs are already working in the city’s favor. Last month Flint brought in nearly $3 million for water. That is nearly $1 million more from the month prior when they only collected $2.1 million, NBC 25 reports.

Mooney hopes that threatening to steal people’s homes — for refusing to pay for poison water they can’t use — will result in a windfall for the city. He noted that those 8,000 plus tax liens would bring in nearly $6 million for the city.

To be clear, no one here is advocating for people not to pay their bills. However, choosing not to pay for a terrible and dangerous service — that you do not want and is forced on you — is hardly unethical. In fact, had there been competition in water services, this problem may have never happened.

When government knowingly poisons you and your children to save a buck — and then tells you they are going to steal your house when you refuse to finance said poisoning — something has gone seriously wrong.

Please share this article with your friends and family to let them know how the government of Flint is treating its citizens.

By: Matt Agorist From: The Free Thought Project

Officer Loses It Online, Openly Calls For The Extermination Of Black People – Anti...