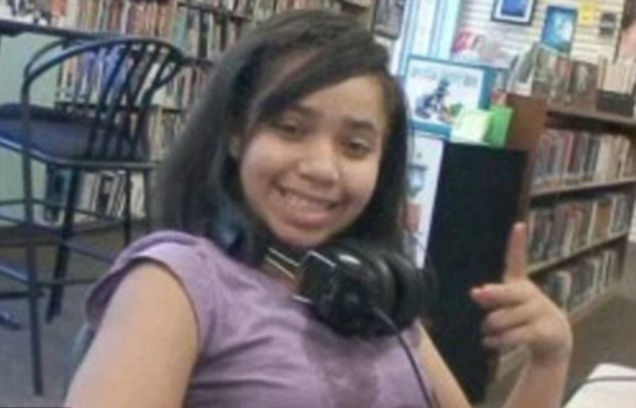 For the “crime” of defending herself, her mother and her siblings, Bresha Meadows spent her 15th birthday behind bars for the shooting death of her abusive father, Jonathan Meadows. For years Bresha and her siblings were subject to his abuse watching their mother be assaulted by their father on a regular basis when finally one day Bresha had decided enough was enough. While Bresha’s mother calls her a “hero”, law enforcement is treating her as a murderer, charging the child with aggravated murder.

Despite a lengthy history of violence in the Meadows home, the story of Bresha Meadows is tragically one we hear of all too often- one where the state fails to protect the most vulnerable in society- women in children living in an abusive situation resulting in a citizen taking matters into their own hands.

As it approaches 10 months since the incident, the support for Bresha and her family is still needed. “On Monday, May 8, Trumbull County Family Court Judge Pamela Rintala will decide whether or not to release 15-year-old Bresha Meadows into her family’s custody while she awaits a May 22 trial on aggravated murder charges in the 2016 death of her father, Jonathan Meadows.” Bresha was not, and is not a threat to the public, she should be allowed what little bit of freedom she may have before the outcome of her trial may have her spending many years bars. In a gross failure on law enforcement’s part to protect Bresha and her family when reports of Jonathan’s abuse came to light, instead of being reprimanded for their shortcomings- Bresha is the one being punished for wanting to end the violence she and her family were subject to compounding the trauma of her abuse. If survivors see that this is what happens when you stand up for yourself, the already low rate of reporting domestic violence incidents will be on the decline.

“Prosecuting Bresha Meadows is just one more failure to support this young girl’s life,” said Sumayya Coleman from Women of Color Network Inc. “We are concerned for the well-being of Bresha and all child survivors of domestic violence, and urge prosecutors to proactively work with anti-violence organizations to develop alternatives to incarceration for young people who are in crisis and need our support.”

Bresha was only 14 years old when she allegedly walked into her parents’ bedroom on July 28, 2016, and killed her 41-year-old father with a .45-caliber, semi-automatic handgun—the same gun she and her family say he used to threaten them in the past.

Bresha has been locked away for 281 days in the Trumbull County, Ohio, Juvenile Detention Center.

According to Bresha’s mother, Brandi Meadows, and her aunt, Martina Latessa, Jonathan Meadows was a violent man who, for years, physically, psychologically, and emotionally abused Bresha’s siblings and her mother.

Latessa, who is also a Cleveland police officer, contacted family services. And, in 2011, a domestic violence protective order was filed against Jonathan Meadow

“In the 17 years of our marriage, he has cut me, broke my ribs, fingers, the blood vessels in my hand, my mouth, blackened my eyes. I believe my nose was broken,” Brandi Meadows wrote at the time. “If he finds us, I am 100 percent sure he will kill me and the children. … My life is like living in a box he created for me, and if I stepped out of that box, he’s there to put me back in that box.”

“She is my hero,” Brandi Meadows said of Bresha after the 2016 shooting. “I wasn’t strong enough to get out, and she helped us all.”

In October of last year, Bresha was placed under suicide watch and family and supporters remain concerned for her psychological and physical well-being.

Bresha’s wellbeing should have been a priority before all of this happened- instead of having to take matters into her own hands and killing her abuser (resulting in her mental health issues) if the appropriate supports were available in the first place such as adequate victim services she and her family would not be in this position.

“Bresha has been diagnosed with PTSD, generalized anxiety, and major depression,” Brad Wolfe, one of Bresha’s lawyers, said Thursday in an interview with The Root.

“As we argued [during a hearing Wednesday], it is critical for Bresha to be released so that she can receive appropriate medical and mental treatment,” Wolfe continued.

“We are rising up to demand that Bresha, like all child survivors of domestic violence, needs community support, not further traumatization by prosecution and incarceration,” said Prentiss Haney, executive director of the Ohio Student Association.

According to the 2015 report “Gender Justice: System-Level Juvenile Justice Reform for Girls” (pdf), 84 percent of girls in the juvenile-detention system have experienced family violence; additionally, “[girls] in the justice system have experienced abuse, violence, adversity and deprivation across many of the domains of their lives—family, peers, intimate partners and community.”

“We are rising up to demand that Bresha, like all child survivors of domestic violence, needs community support, not further traumatization by prosecution and incarceration,” said Prentiss Haney, executive director of the Ohio Student Association.

According to the 2015 report “Gender Justice: System-Level Juvenile Justice Reform for Girls” (pdf), 84 percent of girls in the juvenile-detention system have experienced family violence; additionally, “[girls] in the justice system have experienced abuse, violence, adversity and deprivation across many of the domains of their lives—family, peers, intimate partners and community.”

Though Wolfe didn’t speak specifically to the research that points to the disproportionate punitive actions (pdf) taken against black girls who have been victimized prior to being thrust into the juvenile-detention system, he was clear about the structural violence and neglect that Bresha has faced.

“This case is about Bresha and the specific surrounding circumstances which she has had to endure,” Wolfe said. “It is an example of how the system failed her.”

Despite Bresha’s clearly fragile state and the fact that she has no history of violence, prosecutors argued during the hearing Wednesday that she posed a flight risk and should remain in custody until the May 22 trial.

“As a member of the #FreeBresha campaign, I am appalled that the prosecutors want to keep a traumatized 15-year-old in jail by claiming that she’s a flight risk,” Mariame Kaba, a member of Survived & Punished and founder of Project NIA, told The Root.

“It is absurd and unconscionable,” Kaba continued. “The campaign has stood firm from day one calling for Bresha’s release from jail and that the charges against her be dropped. That remains the same.”

Although Bresha will not be tried as an adult, if found guilty of aggravated murder, she could still be incarcerated until she is 21 years old.

What are your thoughts on Bresha being released into the care of her family before trial? Do you think that her actions warrant the consequences usually reserved for cold blooded killers? What do you think is the chance of her reoffending, or the probability of being a danger to the public should she not be convicted and released into the public again one day? Join the discussion in the comments section below.