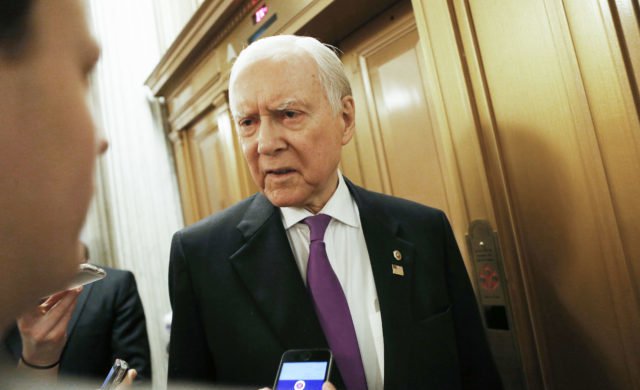 Utah lawmakers really don’t have much sympathy for the average American.

First, Rep. Jason Chaffetz argued that people should skip buying a new iPhone so that they can afford the kind of health care they want. Then, on Tuesday, Senator Orrin Hatch said that repealing the Affordable Health Care Act is difficult because the American people want “every dime they can be given.”

As he was leaving a meeting at the Capitol, Hatch, who is the head of the Senate Finance Committee and the longest serving Republican in the Senate, was asked by a reporter how the “public’s perception” of the House passing the AHCA is affecting the Senate’s attempts to pass the bill without Democratic support.

Hatch showed how disconnected he is from the people he is supposed to represent when he with his arrogant response. He told the reporter:

‘The public wants every dime they can be given. Let’s face it, once you get them on the dole, they’ll take every dime they can. We’ve got to find some way of getting things under control or this country and your future is going to be gone.’

Senator Hatch’s remarks, not surprisingly, have not been well received. Some of the people he insulted with his statement have already called him out on Twitter.

Plenty of people even reminded the Senator that, as a government employee, he himself is “on the dole.”

One of Hatch’s Senate colleagues, Patty Murry (D-Washington) also criticized him for his comments.

Hatch has gone back and forth about ending his 42-year Senate career in 2018. At this point, he’s suggested that he will run again, unless someone that he approves of, like former presidential candidate Mitt Romney, opts to run instead.

If Hatch keeps making comments like the one he made today, though, he might not have much of a shot at re-election, with or without Romney running.

[WATCH] Nevada Jailers Beat Man to Death as he Cries for Help and They...