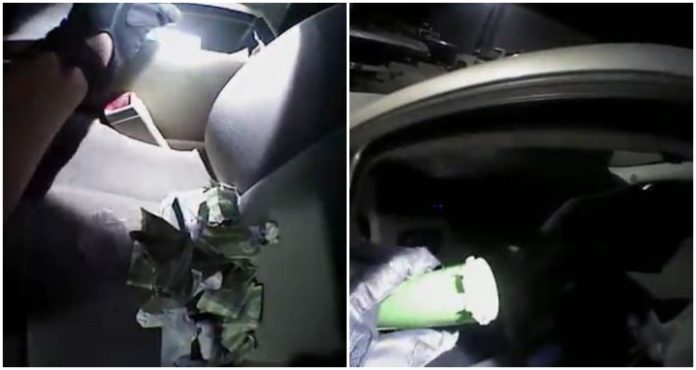 Body cam footage shows a Colorado cop framing a man for drugs and gun possession by staging a fake drug bust reenactment in a tow yard after an initial search of the vehicle may have turned up nothing.

Pueblo police officer Seth Jensen claimed he had his body camera turned off during the initial search, which is when he supposedly found the contraband, so he then turned on his camera to conduct the search again under the guise that it was his first time searching the car, according to PINAC.

But we do not really know if he actually found those items in the car or if he planted them.

PINAC reported on the details:

Jenson confessed to faking the footage after a prosecutor texted him to ask about discrepancies in his report after he was cross-examined during a preliminary hearing.

After learning how Jenson defrauded the court by faking the footage and testifying, a Pueblo deputy district attorney dismissed the charges, conceding Jenson’s footage was staged.

Jensen had pulled over for a traffic violation in November 2016. During the traffic stop, Jenson had Cajar’s car towed when he was unable to provide him with current insurance and registration, according to a police report.

Cajar might still be facing charges if it weren’t for the text messages exchanged between Jenson and deputy district attorney Anne Mayer after Jenson was cross-examined during a preliminary hearing on March 22.

Mayer texted Jenson about why statements in his report didn’t add up with what footage on his body cam showed.

That’s when Jenson spilled the beans.

“For the search, the body cam shows different than the report because it was,” he replied back to Mayer.

“Prior to turning my body cam on, I conducted the search. Once I found the shit, I stepped back, called (a fellow officer), then activated my body cam and walked the courts through it.”

“Was that in the report?” Mayer asked. “If not you’ve got to write a supplement explaining that your body cam was off during the search and that the body cam that does exist is a reenactment.”

Mayer disclosed the information to the deputy district attorney in charge of the case, Michelle Chostner.

Chostner then sent the text exchange to Cajar’s attorney, Joe Koncilja, who spoke out about Jenson’s actions after his clients case was dismissed.

“Everyone is led to believe that the body camera footage actually represents in-time sequencing of events as they transpire,” Koncilja said.

“This was concerning because all indications in the discovery and during his testimony at the preliminary hearing indicated that the body camera footage actually represented the sequence of events as they developed regarding the search.

Furthermore, the staging was done in such a way to make it look like it was done in real-time.”

The Pueblo Police Department stated Jenson could be disciplined internally after an investigation is completed.

Koncilja believes charges should be filed for the illegal activity by the officer.

“It’s tampering with evidence,” he said.

Cops need to know they are not above the law. Tampering with evidence and staging a reenactment while deceiving people into thinking it is the real deal is illegal and immoral.

Watch the video of Jenson tampering with evidence below:

Not Good — Trump Warns Of “A Major, Major Conflict With N. Korea. Absolutely”...