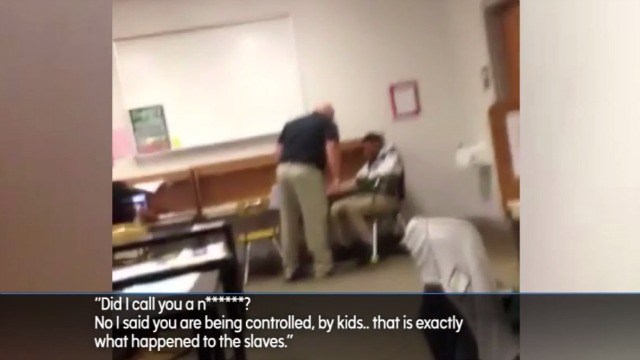 In an already tense situation where a young boy in North Carolina is the minority in a majority white school and majority white neighborhood, a young man has found himself to be the target of racial slurs and being compared to a slave by his teacher. The young man was caught laughing, and the teacher using poor judgment decided to use the loaded verbiage. Unbeknownst to the teacher, however, now with the advent of social media allowing others to share everything as it unfolds- another student captured the confrontation on snapchat in a video that has since gone viral video.

A North Carolina teacher has been fired after comparing a 13-year-old student to a slave.

Ayona Wilson said that her son, Dayon Warren, was so mortified when the video hit Snapchat that he has not wanted to return to school since.

The incident apparently took place in the “Cougar Den,” where students finish homework, and began when the teacher got upset that a group of students would not stop laughing.

“Did I call you a ‘n*****?’ No, I said you are being controlled, by kids. That is exactly what happened to the slaves. They were controlled by their owners, you’re letting him control you and you’re the one who’s getting in trouble,” the teacher can be heard saying in the video.

At one point, a different male student stepped in as well. “When you’re black, it changes the whole way people perceive you and people look at you,” he said, noting that it was the same for women and gay people.

Completely ignorant to his privilege and how much weight his words hold, especially over young impressionable minds, he had to be called out by another one of his students. Students stood by the side of their friend and initiated dialogue with the school administration about how the incident was inappropriate.

“Realize that it’s not just a word when you say stuff like that. Realize all the charges and all the connotations it has in it,” he said, as the other students applauded. “And just make responsible choices. If you’re a teacher and you don’t want to get fired, maybe you don’t want to say this.”

After class, students went to the principal’s office to stage a sit-in, which turned into an impromptu assembly in the auditorium that lasted for an hour.

Widhalm said that the assembly proved to be “a very good dialogue about the difficulties and the issues that still exist around race, around identity, around the things that aren’t resolved.”

“The school has a strong, diverse population but like society today, we’re still coming to grips with how we do that in a way that is … empowering for everyone,” Widhalm said. “These are students who want to be part of a better school, a better society.”

Do you think that the dismissal of the teacher in this situation was appropriate? Do you think the student and his mother here overreacting to a well-meaning teacher? Watch footage of the incident in the video attached, and share your thoughts with us in the comments section below.