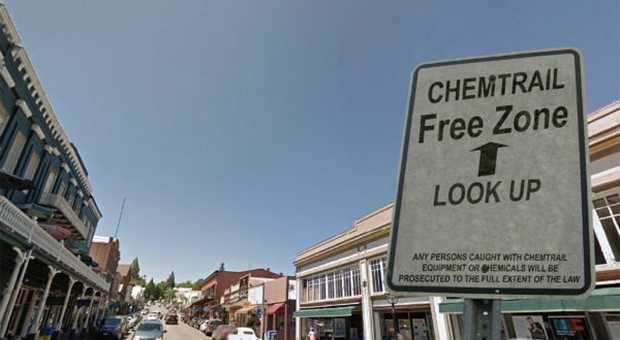 Nevada city has now declared it will be a chemtrails free zone according to City Hall insiders.

This will be the first town in the world to bring such law into action.

Green party member, Derrick Packard said: “It’s clear that the Global Elite is trying to control everything,” adding “We need to demonstrate to the world that the buck stops here in Nevada City. If you control the skies, you control life.”

According to ncscooper: Nevada City, CA — As the city council seats with new members this year, notably controversial community activist Reinette Senum, first on the agenda according to City Hall insiders will be a declaration that Nevada City is a Chemtrail-free zone. This will make the rustic gold rush town the first in the nation to enact such a law.
“It’s clear that the global elite is trying to control everything,” said Green Party member Derrick Packard speaking after the swearing-in ceremony. “We need to demonstrate to the world that the buck stops here in Nevada City. If you control the skies, you control life.”When asked what impact a local ordinance would have on the global chemtrail conspiracy, Mr. Packard bristled.

“This is about small steps,” continued an agitated Mr. Packard. “Think global; act local. I’m sure you’ve heard that before, right? Built into the proposed ordinance is language that allows us to use the city’s general fund to sue chemtrail flyovers. We are under no illusion that this is an uphill battle, but we mean business.”

According to the Nevada City Treasurer, it is unclear what the fiscal impact will be on this ordinance. However, given the recent litigious and fruitless efforts by the county Board of Supervisors, legal action could run into the millions. The tab could be especially high due to the fact that there is zero evidence of any global chemtrail conspiracy, which could contribute to forensic investigations outlays reaching into the millions before the first court motion is drafted. Despite this, area activists are unrelenting.

“How much is it worth to you to save your planet?” Questioned a rhetorical Mr. Packard has he pointed to the clear blue sky above Nevada City. “We want the world to know that our little town is leading the charge against the elite brainiacs who want everything for themselves. As Howard Zinn taught us [editor’s note: Mr. Packard went on for another 45 minutes discussing Professor Zinn.]”

As for other pressing Nevada City business, also on the agenda is the a motion to remove all radio producing devices except for local radio station KVMR where Ms. Senum ironically hosts a weekly broadcast on the dangers of Electromagnetic Radiation, and a proposed name change of the city to Los Mineros to better represent Nevada City’s 150 year taco-miner heritage.

WATCH: Racist Threatens To ‘beat the sh*t’ Out Of Latino Teens For Speaking Spanish

The Cop Who Shot And Killed Philando Castile Was Just Acquitted – Anti Media...