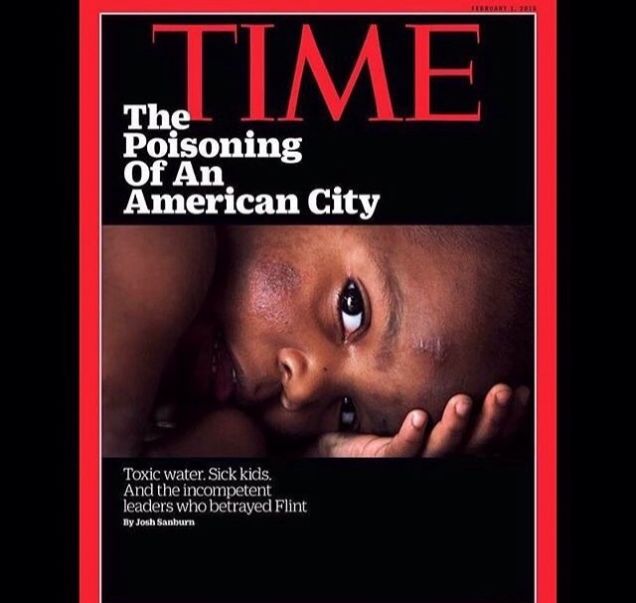 $7 million in additional food assistance will be given to the children of Flint Michigan poisoned by lead contaminated waters. If you or your children are suffering or have suffered the effects of the water poisoning, but moved away to get away from the dangers- the government will not compensate you for their poisoning of you. In other words, to access the benefits you must still be willing to live under life threatening circumstances in lieu of moving to a safer locale for the government to assist you.

As Reported by The Root:

Thousands of children in the city of Flint, Mich., will receive additional money for nutritional foods that can help limit the effects of lead exposure, but those whose families left the city amid the water-contamination crisis are no longer eligible for the subsidy, even though they may still suffer the effects of lead poisoning.

Even face of the issue, 4-year-old Sincere Smith, represented on the cover photo of the Time Magazine issue above will not be receiving benefits because her family moved a mere 15 minutes away from Flint last year- The Detroit Free Press reports  “they are not among the 15,000 families who qualify to receive part of the $7 million in additional food assistance”

“If I had moved to another state, I could understand being treated differently and everything, but moving just 15 minutes away, I feel like … it’s kind of unfair,” Ariana Hawk, Sincere’s mother, told the Free Press. “I’m still within Genesee County.

Hawk said she thinks that all kids affected by the Flint water crisis should be entitled to the same benefits, even if they don’t live in the city anymore or don’t qualify for food-assistance benefits.

Even though the far reaching effects of the poisoning may effect these children and their families for the rest of their lives, the government seems to thing they can wipe their hands clean of responsibility should families move away from Flint.

Michigan Department of Health and Human Services spokesman Bob Wheaton told the Free Press that the department determined eligibility based on what it felt was the best way to allocate the limited money.

“We decided that we wanted to focus on providing this nutritional food to people who are still living in Flint,” Wheaton said.

A one-time payment of $420 per child will be automatically added to the benefits cards of eligible families, state officials said, and the money, which is in addition to other food assistance, is on top of the $30 per child that families received in March, and is intended to be used throughout the year.

From the Free Press:

MDHHS will issue the funds based on food assistance eligibility because it allows it to focus on assisting the families who are “the most in need,” Wheaton said. It can be used to purchase food that qualifies under the Supplemental Nutrition Assistance Program (SNAP), but the department recommends recipients spend the money on foods high in calcium, vitamin C and iron.

To be eligible for the payment, residents must have lived in a Flint ZIP code identified as being served by the City of Flint water system on Feb. 28, and still live in such ZIP code April 1.

Hawk, 27, has five children ranging in age from 3 months to 10 years, and she told the Free Press that she moved her family to Swartz Creek, Mich., last year because of the ongoing issues with the water in Flint.

“I moved because it was the best decision for me and my kids,” Hawk said.

The news site notes that it is unclear how many families moved away from Flint that would qualify for the benefits if they were still in the city.

Dr. Mona Hanna-Attisha, a pediatrician in Flint who was instrumental in exposing the lead problem, told the newspaper that officials know people have moved from the city because of the lead-contaminated water, but families should still be eligible for the benefits. She explained that lead lasts in a person’s blood for a short period of time and eventually gets stored in the bones, where it can last for decades.

“When you have poor nutrition in the future, it comes back out of your bones, back into your bloodstream, and causes that neurotoxicity all over again,” Hanna-Attisha said. “In addition, we know that children obviously need great nutrition for brain development.

Flint residents are still relying on bottled or filtered water for drinking, although state officials claim that the water quality has improved and continues to improve.

In addition, researchers from the University of Michigan and Wayne State University studied the filters in Flint homes from July until November 2016 and again in March, and while the activated-carbon-block filters provided by the state remove metals such as lead, studies have shown that they also support the growth of bacteria in water.

Felicia Waters is a mother of three who received additional food benefits in March and expects to receive $1,260 this month to buy food. She told the Free Press that anybody affected by the crisis should qualify, too.

“I honestly just feel like the whole city of Flint deserves, and should be entitled to, the food-assistance benefits,” Waters said.

What are your thoughts about the issue. Do you think that all children should receive the benefit regardless of where they currently reside, if affected by the poisoned water? Or do you think the government it right to limit funds to those who remain the in immediate area. Share your thoughts in the comments below.

The U.S. Military is Using Mini-Drones 3D Printed in under 24 Hours – Anti...

8 Men as Rich as Half the World – Anti Media News