The Chicago Police Department started an investigation into a cellphone video on social media which shows a plainclothes officer repeatedly hitting a black man in the head while he was on the ground.

According to NBC Chicago, family members shared the video, which they said was taken around 7:30 p.m. on Monday in the city’s West Englewood neighborhood. In the video, 34-year-old Jermaine Milan can be seen on the ground with a white plainclothes police officer straddling him. The officer repeatedly strikes Milan in the head while yelling, “Spit it out.” It is not quite clear what “it” is.

The incident allegedly happened after a drug deal, so it is likely the officer thought it was some sort of illegal substance, but not a weapon.

Milan’s stepmother acknowledged that Milan did put something in his mouth, but insists officers used excessive force.

The news station reports that Milan was hospitalized after his arrest; his family says he sustained a broken nose, a black eye and an injured arm. 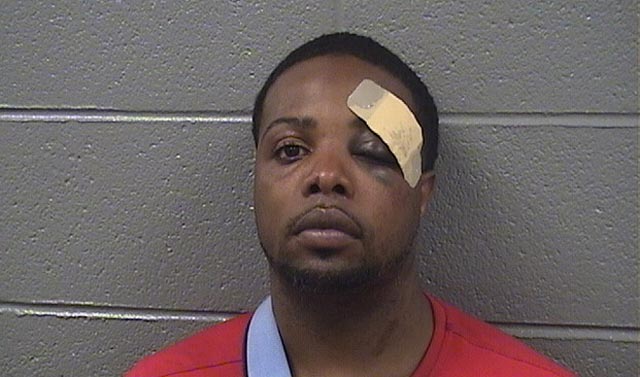 “[Jermaine] was minding his own business and they just came at him, you know?” Juwahn, Milan’s brother said.

The family says that the officer can be heard in the video telling Milan, “I’ll kill you.”

“I don’t like the police no more—at all,” Juwahn said. “They’re wrong for that.”

Milan, a father of two, was charged with possession of a controlled substance, obstruction of justice and aggravated assault, and his bond was set at $75,000.

“We became aware of the video documenting plain clothes officers attempting to arrest a noncompliant offender after a suspected narcotics transaction last night,” the department said in a statement. “An investigation into the incident has been opened and the matter will be referred to the Independent Police Review Authority for a thorough review of the facts and circumstances of the incident.”