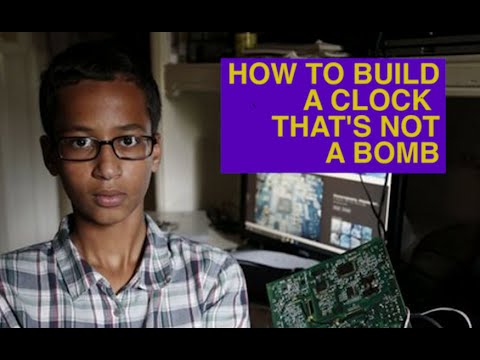 Ahmed Mohamed, the Muslim teen from Irving, Texas, arrested and charged with making a clock which was later deemed to be a “hoax bomb” will not be getting any justice over his mistreatment and clear racial profiling. A federal judge has thrown put the lawsuit filed against the city, and the city’s School District despite his civil rights being violated during the September 2015 incident. Many came to the side of the young teen, highlighting the injustice he faced- including President Obama, but none of their actions held any weight for U.S. District Judge Sam A. Lindsay who dismissed the lawsuit deeming there was no proof of religious or racial discrimination.

As Breanne Edwards for The Root reports:

That charge was later dropped, but not before the case drew a flurry of protests. Ahmed’s name became widely recognized as the 14-year-old made headlines.

“Here is what Ahmed’s school now has to say about what happened: “At no point did we think it was actually an explosive device. It looked suspicious and was presented in a way that the teacher took the appropriate actions, and we support the teacher.””

The lawsuit named the Irving Independent School District, the city of Irving, and MacArthur’s principal as defendants and was based on the Equal Protection Clause of the U.S. Constitution and Title VI of the Civil Rights Act of 1964.

However, on Thursday, U.S. District Judge Sam A. Lindsay agreed with the city and school district’s motions to dismiss the lawsuit on the basis that there was no evidence Ahmed had faced religious or racial discrimination.

“Plaintiff does not allege any facts from which this court can reasonably infer that any [Irving Independent School District] employee intentionally discriminated against A.M. based on his race or religion,” the judge wrote in his ruling.

The judge also ruled that the lawsuit failed to prove that the arrest violated Ahmed’s Fourth Amendment rights against unreasonable search and seizure.

“Plaintiff fails to allege a policy, custom or practice of the city that was the moving force of an alleged constitutional violation,” Lindsay declared.

In the ultimate failure of justice, even after determining that the clock was indeed not a bomb, the school still proceeded to treat Ahmed, a child- like a hardened criminal and to have him humiliated and made an example of in front of his peers. He brought the clock to impress his teacher for praise but was met with punishment.

Judge Lindsay said that MacArthur High School Principal Daniel Cummings was looking out for the safety of the other students when he and a local police officer removed Ahmed from the classroom, brushing off questions in the suit that questioned Cummings’ motives.

“On the one hand, by not taking action, he is faced with the gruesome prospect of death or serious injury of persons had the device actually been a bomb and exploded; and, on the other hand, he is faced with a federal lawsuit for denial of a student’s constitutional rights because the device turned out not to be a bomb,” he added.

“Woe unto the principal who fails to act on a potential threat that later becomes a reality!” Linsday wrote. “This is not a situation in which a person standing in Principal Cummings’ shoes can take unnecessary risks”

In the aftermath of the incident Ahmed and his family had moved from the United States to Qatar for a time due to the continued discrimination they endured following the incident. They felt exiled and unsupported and the judge’s action most likely fortify their sentiments. Ahmed is no longer able to live his life as a curious and intelligent young man with normalcy. “Instead, he’s waking up to the sound of more reporters in the living room. Because he’s not Ahmed Mohamed, a regular 14-year-old. He’s “Clock Boy,” a viral sensation, the accidental embodiment of a national debate about Muslims being dangerous — or not. A black youth mistreated by overzealous cops — or an example of vigilance against potential terrorism.“