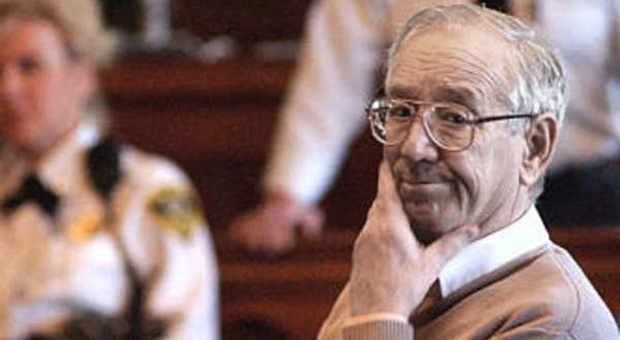 Father James Porter is known as one of the most prolific child abusers from the Catholic Church to ever have faced criminal charges.

The pedophile priest was caught after a private investigator, who was working with the serial rapist’s victims, taped a phone conversation in which Porter admitted to raping over 100 children.

Porter was jailed after 28 adults came forward to testify that they had been abused by the priest when they were children, and although there was a taped confession of him admitting to raping all those children, prosecutors on the case believe the actual number was well over 200 victims.

The ex-priest pleaded guilty to multiple abuse charges of child rape, but prior to the sentencing, 68 of Porter’s victims agreed to drop their lawsuit against the church in return for a reported settlement of $5 million.

Since being jailed, prison officials described Reverend Porter as having “exhibited a voracious sexual appetite, even behind bars.”

The Sun Chronical reports: The Porter case was only the tip of the iceberg of clerical abuse that eventually expanded to include hundreds of priests and a major coverup scandal with a rising number lawsuits that threatened to bankrupt the church.

Among the most damning Porter revelations were that church officials who knew the seriousness of the charges against the priest, transferred him from parish to parish, rather than dismiss him from the priesthood.

Porter was assigned to St. Mary’s after being ordained in 1960. But when complaints arose, he was sent to another parish in Fall River, then was transferred again to New Bedford. In 1969, he was moved to a parish in Bemidji, Minn. All along the way, according to church records and news reports, Porter abused children.

Porter was a pedophile, and superiors knew or suspected. At least twice before he formally left the priesthood in 1974, he was sent to treatment centers.

Porter eventually married and had four children of his own before Fitzpatrick caught up with him, still living in Minnesota.

Robitaille, the second oldest of three children, was 11 and attending fifth grade at St. Mary’s School when he met Porter. The young, energetic priest was instantly popular and seemed to have a way with kids as a supervisor for CYO sports activities and coordinator for the church’s altar boys.

“Our pastor was an older man, and people were really impressed by the energy of this young guy,” Robitaille said.

But underneath the black suit and clerical collar, Robitaille said, lived a monster. An altar boy whose family life revolved around the church, Robitaille became one of the predator priest’s “favorites.”

“This … would attack me right after Mass,” said Robitaille, who remembers being terrified of the priest.

Sexual assaults occurred in whatever place seemed to be convenient, Robitaille said, from the church basement to a cottage on the Cape to which the priest had access.

“I couldn’t get away from the guy,” he said.

On occasion, Porter would stop his car and beckon to the 11-year-old or call his home and ask him to come to the rectory. Robitaille said he was never physically threatened, but he heard stories that the priest would take off his belt to intimidate other children.

Robitaille said he never informed his parents or his siblings about the attacks.

Porter warned him not to tell, Robitaille said, and he obeyed. In the world of the 1960s, he said, the word of a priest was considered second only to God’s.

“The power of a priest was immense,” Robitaille said. “We were taught that the priest was the embodiment of God on Earth.

Survivors began to hold regular support meetings in private at a building on Elm Street in North Attleboro.

“When I’d attend, there’d be 100 people there,” Robitaille said.

Robitaille became the public face of the survivors early on after a lawyer representing the group asked for a spokesman to step forward.

One of his first duties was to issue a brief statement when he and several other victims appeared to file the initial complaint at the North Attleboro police station.”There were remote TV trucks everywhere,” Robitaille said. “It was unbelievable.”

Unreal, too, was the world into which the sudden and shocking disclosures about the pervert ex-priest spilled.

“They were difficult days for everyone in the Diocese of Fall River,” diocesan spokesman John Kearns said.

At the time, Bishop James L. Connolly had been transferred to Hartford, Conn., leaving behind a leadership vacuum that hampered the church’s response.Bishop Sean O’Malley was quickly appointed to fill the void.

O’Malley – now the cardinal of Boston – met with victims, arranged a settlement and pushed through a series of reforms intended to protect children and lead the diocese out of its blackest period. But it would take time.

Roderick MacLeish, the Boston attorney who would become famous as the lawyer who worked with Porter’s victims to bring the ex-cleric before a judge, said attitudes about religious leaders were far different before 1992.

Priests were almost universally revered, he said, and any suggestion that a cleric would abuse a child seemed unthinkable.MacLeish remembers his own initial skepticism when he received the first call from his office that a half-dozen adults who said they had been abused as children by Porter were asking to see him.

“It was hard to accept,” MacLeish said. “But I met with them, and after I did, I knew they were telling the truth.”

After a handful of victims agreed to go public with their charges, MacLeish interviewed witnesses, asked questions and sought to bring pressure to the Bristol County District Attorney’s Office to prosecute.

On May 7, 1992, a Boston TV station telecast interviews with eight Porter victims who for the first time made public their allegations against the ex-priest.

Although the church officially deplored priestly abuse, the sensational charges didn’t sit well with the church hierarchy or with skeptics, who greeted some of the victims with doubt and ridicule.

“It was a scary time,” MacLeish said.

Soon after the sensational allegations became public, then Boston Cardinal Bernard Law called down the power of God on the media – specifically The Boston Globe – who he said were fixated on the case and were not reporting positive news about the church.

Some doubters did more than getting angry. MacLeishe recalls that someone discharged a small firearm outside his house. No one was injured.

Ultimately, Porter was convicted in Minnesota in 1992 for sexually molesting a babysitter of one of his children.

Politician Arrested For Pinching Woman’s Genitals ‘Said He No Longer Had To Be Politically...