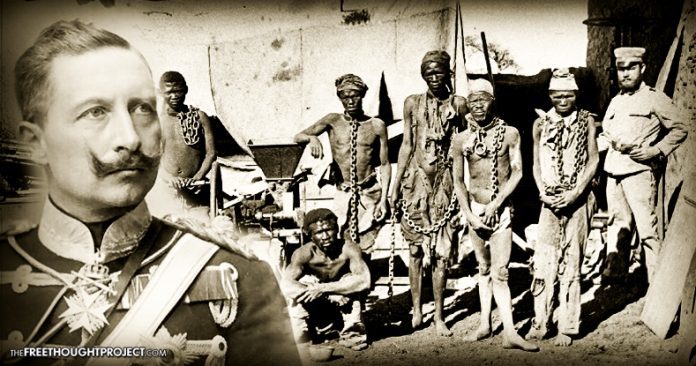 Perhaps no atrocity has been more extensively covered than the Holocaust carried out by the Third Reich in Germany. Yet few Americans are aware that there was a holocaust committed by the Second Reich 40 years prior.

While Adolf Hitler is a household name, synonymous with evil, his predecessor, Kaiser Wilhelm II, is far less recognizable — although many of his crimes were just as bad, if not worse, than Hitler’s.

Wilhelm II was crowned in 1888 and launched a “New Course” in German foreign relations. His policies ultimately resulted in Germany’s involvement and eventual defeat in World War I. Despite his notable involvement in World War I, little else is taught about Wilhelm’s reign, in American schools.

The Beginning of the 1st German Holocaust:

Germany’s African reign of terror began in 1883, when they raised their flag in South West Africa, heralding the first conquest of the Second Reich’s African empire. Wilhelm II later used the land (now the country of Namibia) as a testing ground for his Lebensraum policy.

Wilhelm II’s Lebensraum, or “living space,” policy was advocated by 19th-century German geographer Friedrich Ratzel, who believed that a race’s survival was dependent on migration. Wilhelm II used this theory to advance a policy with the goal of creating a “New Germany” on African Soil.

The disastrous consequences of this policy led to the suffering of tens of thousands of indigenous African people. Similar to the Jew’s treatment during World War II, the native Herero and Nama people were labeled an “Inferior race” and watched as their human rights were repeatedly violated.

After two decades of mistreatment, the Herero people revolted. In 1904, Germany responded by dispatching 14,000 Soldiers to quell the insurgent colony. After the brutal campaign to defeat the Herero ended, German Lieutenant-General Lothar von Trotha announced a new disturbing policy, saying,

“I BELIEVE THAT THE NATION [THE HERERO] AS SUCH SHOULD BE ANNIHILATED. ONLY FOLLOWING THIS CLEANSING CAN SOMETHING NEW EMERGE, WHICH WILL REMAIN.”

“Death Island,” also known as Shark Island, served as an ideal location for a prison camp due to its low possibility of escape. General Trotha’s troops transported the defeated Herero and Nama people to the island and several other concentration camps within the German colony. Prisoners were transported in cattle cars and served as slave labor for the new colony’s railway system, along with a number of other construction and demolition projects.

Labor conditions on the island were extremely dangerous, resulting in a high number of fatalities. One German Technician noted that his 1,600-slave workforce had decreased to only 30-40 available laborers. By late 1906, at least seven slaves were dying daily due to the grisly working conditions.

Food and provisions on the island were also extremely scarce, as witnesses recalled, “prisoners fought like wild animals and killed each other to secure a share.” Conditions on the island continued to deteriorate and prisoners starved to death or committed suicide to escape the nightmarish conditions. Eventually, German soldiers began referring to it as a “Death Camp”.

One of the first civilians to visit the island briefly described the horrific scene he saw:

A WOMAN, WHO WAS SO WEAK FROM ILLNESS THAT SHE COULD NOT STAND, CRAWLED TO SOME OF THE OTHER PRISONERS TO BEG FOR WATER. THE OVERSEER FIRED FIVE SHOTS AT HER. TWO SHOTS HIT HER: ONE IN THE THIGH, THE OTHER SMASHING HER FOREARM…IN THE NIGHT SHE DIED.

During their imprisonment, captives were frequently whipped, forced into unsanitary living conditions where diseases such as typhoid rapidly spread, and received virtually no medical care. Herero women were photographed being raped and the images were sent back to Germany as “pornographic postcards.”

German scientists also used the island and its prisoners to conduct medical experiments. Shark Island camp physician, Dr. Bofinger injected prisoners with a toxic cocktail of arsenic and opium in attempts to determine if scurvy was a contagious disease.

As bodies continued to pile up, researchers began to perform autopsies on the dead to conduct further experiments. According to German medical statistics, 778 autopsies were conducted in just one year.

After they concluded their experiments, the Germans forced Herero women to boil the heads of their own people and clean them, so they could be sent back to Germany for further research. In all, Over 3,000 skulls of Herero people were sent to German Universities, which they used in an attempt to prove the similarity between the Herero people and apes.

In 1907, German officials finally relented to domestic and international pressure, and shut down “Death Island.” While there is no ‘official’ death toll of the prisoners held on death island, the German Imperial Colonial Office estimates 7,682 Herero and 2,000 Nama people died in colonial concentration camps in South West Africa. Historians estimate that, of these deaths, as many as 4,000 may have occurred at “Death Island.”

The consequences of German colonialization in Namibia are staggering. It is estimated that, in a matter of decades, the Herero population was reduced from 100,000 to less than 15,000, and the Nama population was cut in half.

A report released by the United Nations in 1985 listed the German holocaust in Africa as the first genocide of the 20th century.

While Germany’s outright murder of Africans in Namibia temporarily ceased, as any student of history can tell you, this would not be the last attempted genocide by a German ruler. In fact, many people would say Wilhelm II ‘perfected’ the development of concentration camps, a model later employed by Adolf Hitler’s Third Reich.

Airbnb Host Ordered To Pay $5,000 And Take Asian-American Studies Class After Refusing To...