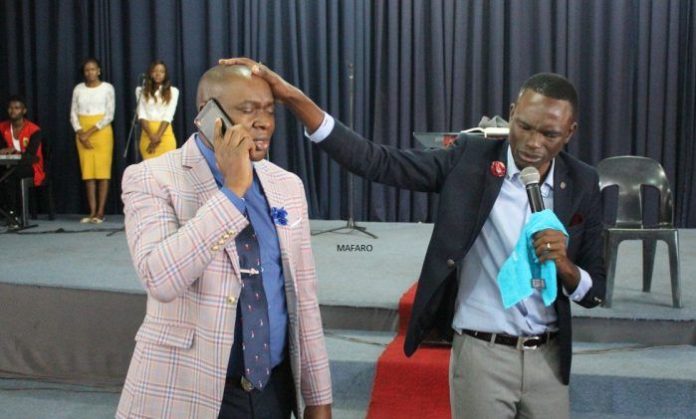 Paul Sanyangore, a controversial pastor from Zimbabwe, claims that he received God’s phone number from the Almighty Himself, and often receives calls from Him on how to best help his congregates.

Sanyangore, who also goes by the name “Pastor Talent”, first made the outrageous claim in February, after a video of him allegedly talking on the phone with God during a service at his church, Victory World International Ministries, went viral on social media. In an interview with Zimbabwean news site H-Metro, he revealed that he was indeed on the phone with the Almighty, adding that he was surprised to see people so shocked about the whole thing.

“I have a direct channel, actually I have his number and I can call him when need rises,” Sanyangore said. “It is possible to talk to God, why would you doubt that I got a call from him? I actually have a direct line which I can call him and get instructions on how to proceed. I got this when I was praying and I heard a voice telling me to call direct.”

“I got instructions on the phone on what to do or say and that is what happened on Sunday. If the heavens spoke to Abraham why not us? You are of faith and people will always have doubts while others are being delivered,” the pastor added.

And if that wasn’t weird enough, Paul Sanyangore then went on to say that he would be launching a new show on his church’s television channel, Victory TV, called “Heaven Online”, where more of his phone conversations with God could be heard. He even said that he planned to reveal God’s phone number during a special service at the Victory World International Ministries, and invited people to attend so they could witness the miracle.

The big reveal never really happened, but that doesn’t mean Sanyangore lied. No, he just didn’t think it was the right time to do it. At the beginning of May, in a follow-up interview with H-Metro, he said he’ll definitely reveal God’s digits this month.

“The time is ripe, come Sunday the contact will be shared. I will not intercede on behalf of people they will be talking to the creator directly. We will have the event beamed on our television channel, Victory TV for the avoidance of explanations and misrepresentations,” he said.

“When the Israelites demanded to see God, Moses prayed and asked God to present himself. I have had a similar situation and it is time that I share the contact and there are conditions thereto. People have to be pure come Sunday to contain the number. It is going to be a prophetic service and He will be at our base Kingstons House, it is a day not to be missed for healing and deliverance.”

Only he didn’t reveal the phone number this time either. Instead, one of the people attending Sanyangore’s service, a man called Tich Mataz, got a phone call from God in front of the whole congregation. He started delivering prophetic messages, and Pastor Talent said that the miracle was enough to prove that he was telling the truth the whole time. Oh, and also, after receiving the call from Heaven, this Mich Mataz guy can now be considered a prophet…

And just in case this story sounds to unbelievable to be true, here’s a 40-minute recording of Pastor Sanyangore’s “Heaven Online” TV show, where he can be seen talking on the phone with God Himself. Enjoy!

So-called Christian pastors in Southern Africa are a special bunch. I know I’m generalizing, and that some of them are actually decent people, but so many of them are definitely not. In the past few years we’ve seen these “men of God” convince their followers to eat grass or human hair, drink motor oil and even get sprayed in the face with bug repellent, if they want to be saved, healed and delivered. And now we can add Paul Sanyangore’s scam to the list. I actually wonder what these people will come up with next.