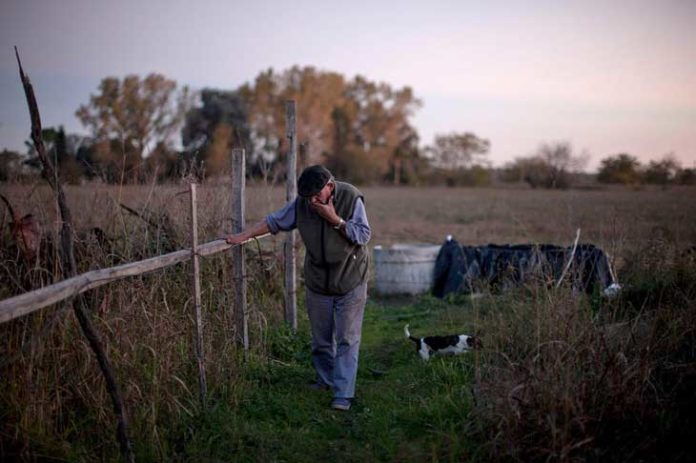 BASAVILBASO, Argentina (AP) — Argentine farmworker Fabian Tomasi was never trained to handle pesticides. His job was to keep the crop-dusters flying by filling their tanks as quickly as possible, although it often meant getting drenched in poison.

Now, at 47, he’s a living skeleton, so weak he can hardly swallow or go to the bathroom on his own.

Schoolteacher Andrea Druetta lives in Santa Fe Province, the heart of Argentina’s soy country, where agrochemical spraying is banned within 500 meters (550 yards) of populated areas. But soy is planted just 30 meters (33 yards) from her back door. Her boys were showered in chemicals recently while swimming in the backyard pool.

After Sofia Gatica lost her newborn to kidney failure, she filed a complaint that led to Argentina’s first criminal convictions for illegal spraying. But last year’s verdict came too late for many of her 5,300 neighbors in Ituzaingo Annex. A government study there found alarming levels of agrochemical contamination in the soil and drinking water, and 80 percent of the children surveyed carried traces of pesticide in their blood.

American biotechnology has turned Argentina into the world’s third-largest soybean producer, but the chemicals powering the boom aren’t confined to soy and cotton and corn fields.

The Associated Press documented dozens of cases around the country where poisons are applied in ways unanticipated by regulatory science or specifically banned by existing law. The spray drifts into schools and homes and settles over water sources; farmworkers mix poisons with no protective gear; villagers store water in pesticide containers that should have been destroyed.

Now doctors are warning that uncontrolled pesticide applications could be the cause of growing health problems among the 12 million people who live in the South American nation’s vast farm belt.

In Santa Fe, cancer rates are two times to four times higher than the national average. In Chaco, birth defects quadrupled in the decade after biotechnology dramatically expanded farming in Argentina.

“The change in how agriculture is produced has brought, frankly, a change in the profile of diseases,” says Dr. Medardo Avila Vazquez, a pediatrician and neonatologist who co-founded Doctors of Fumigated Towns, part of a growing movement demanding enforcement of agricultural safety rules. “We’ve gone from a pretty healthy population to one with a high rate of cancer, birth defects, and illnesses seldom seen before.”

A nation once known for its grass-fed beef has undergone a remarkable transformation since 1996, when the St. Louis-based Monsanto Co. promised that adopting its patented seeds and chemicals would increase crop yields and lower pesticide use. Today, Argentina’s entire soy crop and nearly all its corn and cotton are genetically modified, with soy cultivation alone tripling to 47 million acres (19 million hectares).

Agrochemical use did decline at first, then it bounced back, increasing ninefold from 9 million gallons (34 million liters) in 1990 to more than 84 million gallons (317 million liters) today as farmers squeezed in more harvests and pests became resistant to the poisons. Overall, Argentine farmers apply an estimated 4.3 pounds of agrochemical concentrate per acre, more than twice what U.S. farmers use, according to an AP analysis of government and pesticide industry data.

In this April 16, 2013, photo, Felix San Roman walks on his property in Rawson, in Buenos Aires province, Argentina. San Roman says that when he complained about clouds of chemicals drifting into his yard, the sprayers beat him up, fracturing his spine and knocking out his teeth. “This is a small town where nobody confronts anyone, and the authorities look the other way,” San Roman said. “All I want is for them to follow the existing law, which says you can’t do this within 1,500 meters. Nobody follows this. How can you control it?” (AP Photo/Natacha Pisarenko)

Glyphosate, the key ingredient in Monsanto’s popular Roundup brand of pesticides, is one of the world’s most widely used weed killers. It has been determined to be safe, if applied properly, by many regulatory agencies, including those of the United States and European Union.

On May 1, the U.S. Environmental Protection Agency even raised the allowable levels of glyphosate residues in food, concluding that based on studies presented by Monsanto, “there is a reasonable certainty that no harm will result to the general population or to infants and children from aggregate exposure.”

Spraying is banned within 3 kilometers (1.9 miles) of populated areas in some provinces and as little as 50 meters (55 yards) in others. About one-third of the provinces set no limits at all, and most lack detailed enforcement policies.

A federal environmental law requires applicators of toxic chemicals to suspend or cancel activities that threaten public health, “even when the link has not been scientifically proven,” and “no matter the costs or consequences,” but it has never been applied to farming, the auditor general found last year.

In response to soaring complaints, President Cristina Fernandez ordered a commission in 2009 to study the impact of agrochemical spraying on human health. Its initial report called for “systematic controls over concentrations of herbicides and their compounds … such as exhaustive laboratory and field studies involving formulations containing glyphosate as well as its interactions with other agrochemicals as they are actually used in our country.”

But the commission hasn’t met since 2010, the auditor general found.

Government officials insist the problem is not a lack of research, but misinformation that plays on people’s emotions.

“I’ve seen countless documents, surveys, videos, articles in the news and in universities, and really our citizens who read all this end up dizzy and confused,” Agriculture Secretary Lorenzo Basso said. “I think we have to publicize the commitment that Argentina has to being a food producer. Our model as an exporting nation has been called into question. We need to defend our model.”

In a written statement, Monsanto spokesman Thomas Helscher said the company “does not condone the misuse of pesticides or the violation of any pesticide law, regulation, or court ruling.”

“Monsanto takes the stewardship of products seriously and we communicate regularly with our customers regarding proper use of our products,” Helscher said.

Argentina was among the earliest adopters of the new biotech farming model promoted by Monsanto and other U.S. agribusinesses.

Instead of turning the topsoil, spraying pesticides and then waiting until the poison dissipates before planting, farmers sow the seeds and spray afterward without harming crops genetically modified to tolerate specific chemicals.

This “no-till” method takes so much less time and money that farmers can reap more harvests and expand into land not worth the trouble before.

But pests develop resistance, even more so when the same chemicals are applied to genetically identical crops on a vast scale.

So while glyphosate is one of the world’s safest herbicides, farmers now use it in higher concentrates and mix in much more toxic poisons, such as 2,4,D, which the U.S. military used in “Agent Orange” to defoliate jungles during the Vietnam War.

In 2006, a division of Argentina’s agriculture ministry recommended adding caution labels urging that mixtures of glyphosate and more toxic chemicals be limited to “farm areas far from homes and population centers.” The recommendation was ignored, according to the federal audit.

The government relies on industry research approved by the EPA, which said May 1 that “there is no indication that glyphosate is a neurotoxic chemical and there is no need for a developmental neurotoxicity study.”

Molecular biologist Dr. Andres Carrasco at the University of Buenos Aires says the burden from the chemical cocktails is worrisome, but even glyphosate alone could spell trouble for human health. He found that injecting a very low dose of glyphosate into embryos can change levels of retinoic acid, causing the same sort of spinal defects in frogs and chickens that doctors increasingly are registering in communities where farm chemicals are ubiquitous.

This acid, a form of vitamin A, is fundamental for keeping cancers in check and triggering genetic expression, the process by which embryonic cells develop into organs and limbs.

“If it’s possible to reproduce this in a laboratory, surely what is happening in the field is much worse,” Carrasco said. “And if it’s much worse, and we suspect that it is, what we have to do is put this under a magnifying glass.”

His findings, published in the journal Chemical Research in Toxicology in 2010, were rebutted by Monsanto, which said the results “are not surprising given their methodology and unrealistic exposure scenarios.”

Monsanto said in response to AP’s questions that chemical safety tests should only be done on live animals, and that injecting embryos is “less reliable and less relevant for human risk assessments.”

“Glyphosate is even less toxic than the repellent you put on your children’s skin,” said Pablo Vaquero, Monsanto’s corporate affairs director in Buenos Aires. “That said, there has to be a responsible and good use of these products because in no way would you put repellent in the mouths of children and no environmental applicator should spray fields with a tractor or a crop-duster without taking into account the environmental conditions and threats that stem from the use of the product.”

Out in the fields, warnings are widely ignored.

For three years, Tomasi was routinely exposed to chemicals as he pumped pesticides into the tanks of crop-dusters. Now he’s near death from polyneuropathy, a debilitating neurological disorder, which has left him wasted and shriveled.

“I prepared millions of liters of poison without any kind of protection, no gloves, masks or special clothing,” he said. “I didn’t know anything. I only learned later what it did to me, after contacting scientists.”

“The poison comes in liquid concentrates, in containers with lots of precautions to take when applying it,” Tomasi explained. “But nobody takes precautions.”

With soybeans selling for about $500 a ton, growers plant where they can, often disregarding Monsanto’s guidelines and provincial law by spraying with no advance warning, and even in windy conditions. 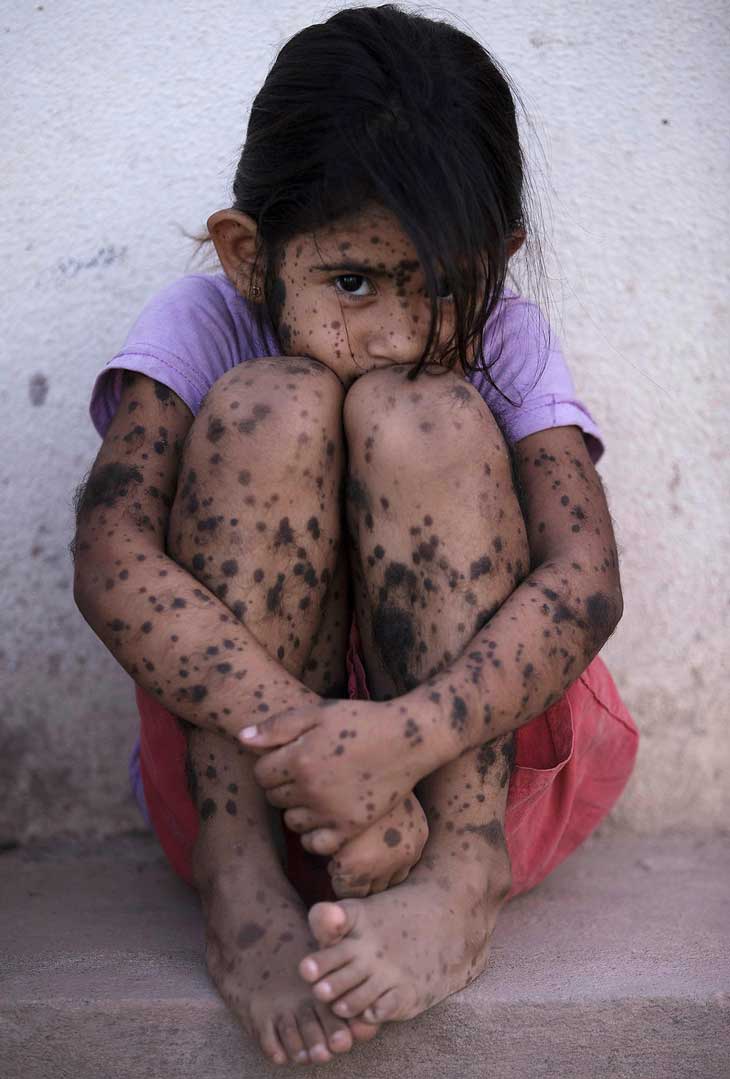 50 Immigrant Women and Children Dumped by ICE at Closed Bus Station in Hurricane...