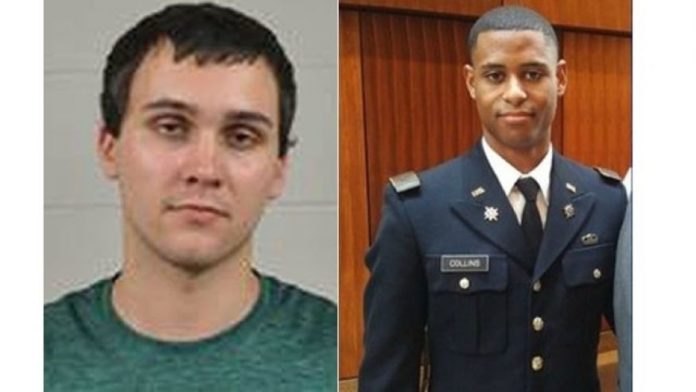 Sean Urbanski, 22, has been charged with first- and second-degree murder in the stabbing death of Bowie State University student Richard Collins III, 23, and the FBI is investigating whether the attack was a hate crime.

Collins, a senior at Bowie State, was ready to graduate on Tuesday with a degree in Business Administration. He was also recently commissioned as a second lieutenant in the U.S. Army.

Urbanski is a member of the white supremacist Facebook group, “Alt-Reich: Nation,” according to NBCWashington.

The unprovoked murder occurred on the University of Maryland’s campus at approx. 3 a.m. Saturday morning near a bus stop. Collins was rushed to a local hospital with a stab wound to the chest and was later pronounced dead.

Court documents obtained by News4 say Collins was waiting for the university’s shuttle bus with his friends when they realized the shuttle bus had stopped running for the night. The three decided to call an Uber and were waiting for one to arrive when they heard Urbanski screaming nearby, the documents said.

Collins and his friends watched Urbanski as he approached them. According to court documents, “Urbanski said, ‘Step left, step left if you know what’s best for you.’ Collins III said, ‘No’ as Urbanski continue to approach.”

One of Collins’ friends noticed Urbanski was holding a knife with a 3 to 4 inch silver blade as the suspect stabbed Collins once in the chest area, documents said. The friend ran toward Baltimore Avenue as she called 911 and asked the Uber driver to call 911. Other witnesses stayed with Collins and tried to help him until police and medics arrived.

Urbanski was still sitting about 50 feet away from where he stabbed Collins when authorities arrived. He was taken into custody at the University of Maryland’s police department.

“It never gets any worse than this,” University of Maryland Police Chief David Mitchell said. “When I sat with the victim’s father, who is a military veteran, and his pastor and we shed tears together … I can tell you, it rips your heart out.”

Mitchell  is also investigating the “Alt-Reich: Nation” on Facebook, the group where Urbanski was a member.

“When I look at the information that’s contained on that website, suffice it to say that it’s despicable, it shows extreme bias against women, Latinos, persons of Jewish faith and especially African-Americans,” Mitchell said.

“We are looking forward to the quickest investigation as possible,” said Artie Lee Travis, Bowie State’s vice president for student affairs, to the Baltimore Sun. “Hate has no place in America. Hate has no place on a college campus where young minds are coming together to try to change the world.”

‘We Are Allowed to Punch, Kick’: Ohio Police Attempt to Justify Brutal Beating of...

Portland Woman Who Died Of Hypothermia Was Evicted For Being Late On $338 in...