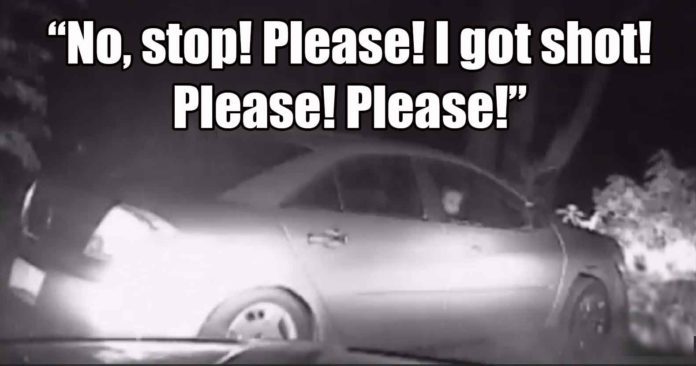 Phenix City, AL – A graphic video, released as part of a report issued by the Alabama State Bureau of Investigation, shows officer Allan Brown firing eleven shots into the vehicle, after engaging in a high speed chase, pausing only to reload and fire another ten shots into the vehicle as the teens can be heard begging for their lives.

Christian Redwine, 17, was killed in the shooting, and passengers Hunter Tillis and Hanna Wuenschel, both 19 at the time, suffered nonfatal gunshot wounds. It was the first volley, of the 21 total bullets, that struck Redwine in the head and heart that ended his young life, according to the Alabama Department of Forensic Sciences.

Brown claimed that Redwine tried to use the car to run him over, which caused him fear for his life, and prompted the fatal shots. An attorney representing Wuenschel said Redwine was trying only to back out of a hole. The attorney said Redwine was shot seven times, Wuenschel two or three times, and Tillis at least twice, according to the Columbus Ledger-Enquirer.

Despite the clearly desperate pleas of mercy from the teens, as Brown unloaded two magazines into their vehicle, a Russell County grand jury found that Brown committed no criminal wrongdoing in the November 6 incident.

Brown can be seen on dashcam video trailing two other police cars also in pursuit of Christian Redwine after reports of a stolen vehicle in Columbus.

Brown can be heard telling the other officers to “let me come around you.”

He then narrates that speeds are approaching 100 miles per hour.

Only two minutes later, Brown again can be heard narrating the speed to dispatch as the Pontiac G-6 he is pursuing appears headed for the highway.

As the teens attempt to take an exit at high speeds, Redwine loses control of the vehicle.

“We’re gonna be on Riverchase Road dispatch. He has wrecked out. Wrecked out. He is spinning. Start uh rescue,” Brown reports to dispatch.

With the wheels of the vehicle now spinning in reverse, Brown, who is now on foot, fires his weapon 11 times.

The passengers can be heard pleading for the officer to stop firing.

Brown, instead, paused only to reload his weapon and fire 10 more times.

By the time Brown had unloaded two magazines, Christian Redwine, 17, was dead, and the two others had both suffered gunshot wounds. In fact, later investigation would reveal that all three teens had been shot in the initial barrage of gunfire.

According to the Columbus Ledger-Enquirer, the incident began when:

Checking the tag, they learned the car had been reported stolen by Fred Levins, a friend of Redwine’s grandmother who considered himself to be like a grandfather to the teen. Around 3:30 a.m. on Nov. 6, Levins noticed it was missing along with his car keys.

When police tried to stop the car, Redwine sped away, initiating a chase that continued into downtown Columbus and crossed the 13th Street bridge into Alabama, where Phenix City police joined the pursuit.

The Russell County Grand Jury cleared Brown of any criminal wrongdoing just two weeks ago, and only days ago he submitted his resignation effective immediately.

According to the Ledger-Enquirer:

Russell County District Attorney Ken Davis said Brown waived his rights and volunteered to testify before the 18-member grand jury, which spent two days reviewing the evidence. Prosecutors did not recommend charges, but asked the grand jurors to determine whether the shooting was justified, Davis said.

Among other witnesses testifying were two more Columbus officers experienced in the department’s training and procedures, and an Alabama Bureau of Investigation agent who probed the shooting, Davis said.

In other words, they brought in a bunch of police apologist “experts” to justify and propagandize the jury into believing that unloading an entire magazine into a car full of teens, then pausing to reload and drop another ten shots as they beg for their lives, was justified.

Perhaps had this officer taken the same training as the Salt Lake City Police Department, which emphasizes de-escalation, and has resulted in them not killing anyone since 2015, these type of incidents would not be accepted and protected as “just doing my job.”

By: Jay Syrmopoulos From: The Free Thought Project

Police Shoot Man In His Own Driveway While Working On His Own Car –...

Jeff Sessions Quietly Prepares To Double Down On Mass Incarcerations As Crime Rates Near...