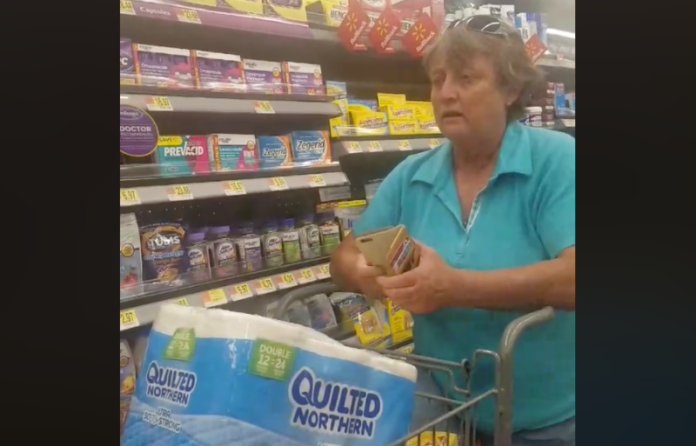 A white woman was caught on video spewing racist comments and racial slurs at a Latina and a black woman in a Wal-Mart store in Bentonville, Arkansas.

The video was shared Monday on Facebook by Eva Hicks, who is identified as the person on the receiving end of the white woman’s awful comments, reported The Root.

“Go back to Mexico,” the woman can be heard telling Hicks as the video starts. “Go back … wherever you’re from.”

Hicks explained all she had said was “Excuse me” as she tried to get past the woman to pick up some medicine she wanted.

“You’re the one that’s rude,” the woman retorts. “You’re in America.”

At that point, another woman’s voice can be heard in the background in disbelief.

“Are you fucking kidding me?” the other woman says. “Are you serious right now?”

“That’s none of your business, stay out of it,” the white woman says, pointing at the other woman who is off camera.

“I don’t need to stay out of it. You’re yelling loud enough for everybody to hear. Stop being ignorant,” the other woman can be heard insisting.

“A nigger, calling me ignorant,” the white woman says.

“Yes,” the other woman says defiantly. “All this ‘Go back to Mexico’ and all that stuff. Yes.”

“It’s not your country. We don’t want you here,” the white woman continues to berate Hicks.

“No, I’m not going to get out of here … because this is my country,” Hicks insists. Hicks is heard starting to cry in the background as the white woman continues on her racist rant.

Latino woman needs medicine, says “excuse me” @WalMart to get it. White woman tells her to leave America then calls another woman “nigger” pic.twitter.com/l7j5YBTlWP

Then a manager shows up and defends the 2 women who were being discriminated against, as he attempts end to the situation. The manager tells the white woman she has to leave as she is being “inappropriate.”

The woman argues for some time before storming off camera, and the video ends.

Activist Shaun King also tweeted out the video, which racked up another 1.55 million views on his account.

@ShaunKing @Walmart @ShaunKing, we agree that this cannot be tolerated and are continuing to look into the matter. Below is our official statement: pic.twitter.com/BkKKVDrjE6

A representative for Wal-Mart told NBC News that company officials have been trying to reach out to Hicks to apologize for what happened in the store, but have not been able to reach her. Wal-Mart also said that it was hoping to reach out to the other woman who attempted to help Hicks.

“We value and respect everyone who visits our stores. We have no tolerance for the language or actions of this customer and are proud that our assistant manager responded appropriately by asking her to leave the store,” he said.

Hargrove said that company officials have not yet been able to identify the woman who was hurling slurs and insults, but that as soon as they did, she would be banned from all Wal-Mart stores.

Texas Teachers Give Insulting “Awards” To Kids, Including ‘Most Likely to Become a Terrorist’...