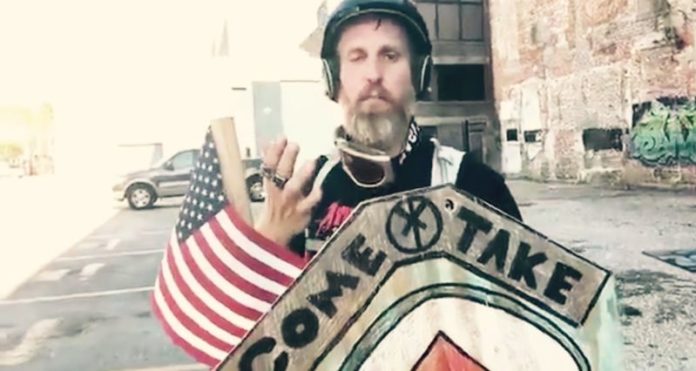 Nicholas Dean, the principal of Crescent Leadership Academy, a charter school in New Orleans that has a predominantly black student body, appeared in a YouTube video wearing rings “associated with white nationalism and the Nazi movement,” the New Orleans Times-Picayune’s Danielle Dreilinger reported.

Dean has been fired from his position at Crescent Leadership Academy, reported NOLA.

“He will not return as the Principal or be associated with Crescent Leadership Academy,” the charter school’s parent group and board said in a statement Thursday.

Dean was also photographed at the statue of Confederate Gen. Robert E. Lee next to a Confederate flag.

Dean claimed that he only went as a “student of history” to witness the long-overdue removal of the Confederate monuments, but pictures and video of the event contradict the principal’s words.

“I didn’t go to protest for either side. I went because I am a historian, educator and New Orleans resident who wanted to observe this monumental event,” Dean said. “People who know me know that I am a crusader for children and I fight tirelessly on their behalf.”

The video of Dean wearing Nazi rings—posted on YouTube on Thursday by photographer Abdul Aziz—tells a different story, as does his appearance on a “white genocide” podcast where he said some people know him as a white supremacist.

In both the video and the “Guerrilla Radio” podcast, Dean identifies himself as “Nick Andrews.” He says straight off in the podcast that he works in a charter school that enrolls mostly African-American students.

The podcast host says, “So it’s probably fair to say, then, you’re not a white supremacist, or some crazy KKK member from the Confederate past?”

Dean responds, “I am not by my definition, absolutely not. But by others,’ most certainly.”

When teachers and school leaders are members of racist organizations, there is no way any of their students are getting a fair chance, especially if the students are minorities. It is great to see this racist fired, but schools need to be pro active on this and they need to investigate all teachers before allowing them around kids. There are too many racists and sexual predators involved in the school system and it needs to stop.

Black Man Ran Over By Police After They Mistake Him for Suspect, Is Later...