Home News John McCain Exposed As An Agent Of The Rothschilds – Anti Media... 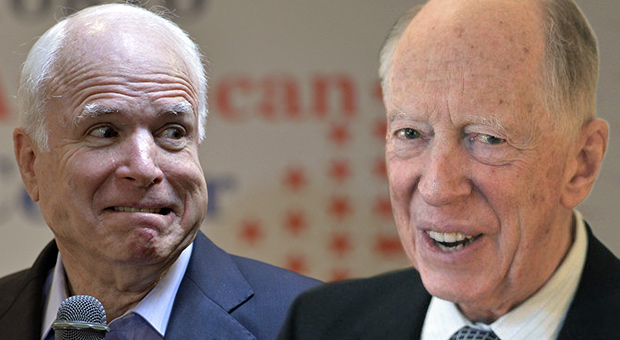 An investigation into Senator John McCain’s 2008 Presidential Election campaign, has revealed that he has been on the “payroll” from the Rothschild banking family, according to a campaign watchdog.

The inquiry into McCain’s illegal funding has revealed that the Rothschilds have been secretly funneling money to the former presidential runner to influence his policies.

The Republican president nominee received campaign contributions from Lord Jacob Rothschild, the head of the British wing of the banking dynasty, during his election bid, which is strictly prohibited by US law due to Rothschild being a non-US citizen.

The investigation by Judicial Watch, a Washington D.C. based watchdog, has exposed a series of violations of US law for improper funding from the powerful British banker.

During McCain’s 2008 election bid, Lord Jacob Rothschild and son, Nathanial Rothschild, invited the Republican senator to London for a campaign fundraiser in his honor.

Judicial Watch has discovered that the Rothschilds improperly sponsored the fundraiser as US political campaigns are forbidden from accepting contributions from foreign nationals.

“The Rothschilds paid for the event, the venue, the catering, and any other related costs,”

Tickets to the Rothschild event cost $1,000 to $2,300, and the luncheon dress code was “lounge suits” and gave the guests the opportunity make further donations.

The investigation has also revealed that John McCain preceded his trip to The United Kingdom to pay court to Lord Rothschild with a visit to Israel, the Middle East state that counts the Rothschild family as among its chief patrons, to the point that an earlier Rothschild, Edmond, of the Paris-based arm of the banking family, is honored on Israel’s currency today.

McCain was accompanied to the Rothschild gala (and to Israel) by his good friend and fellow devotee of Israel, Sen. Joseph Lieberman (I-Conn.), who has endorsed McCain and who was often mentioned as either a vice presidential running mate for McCain or as a likely secretary of state in a McCain administration.

According to Incog Man, That the Rothschild empire would support McCain should come as no surprise to those familiar with McCain’s record.

First of all, McCain has been a longtime member of the Council on Foreign Relations (CFR). Although, on Oct, 30, 1993, The Washington Post described the CFR as “the nearest thing we have to a ruling establishment in the United States,” saying that they are “the people who, for more than half a century, have managed our international affairs and our military-industrial complex,” what the Post did not say was that the CFR is actually only a NewYork-based division of the grandly named Royal Institute of International Affairs, which has functioned as the foreign policy-making arm of the Rothschild dynasty, long the prime mover, behind the scenes, of Britain’s imperial ventures.

In addition, McCain’s own backstage connections in his home state of Arizona (See AFP, Feb 4, 2008) are equally intriguing and point even further to the reasons why the Rothschilds are enamored with McCain.

As AFP pointed out, McCain’s late father-in-law, Jim Hensley, was a top figure in the organized crime power network surrounding one Kemper Marley, who acted as the front man in Arizona for the Bronfman family—key players in the Lansky crime syndicate, popularly though inaccurately referred to as “the Mafia”—who used Marley to control both major political parties in that state.

The Bronfman family has long been allied with the Rothschilds as among the leading billionaire patrons of Israel and the global Zionist movement, so much so that Edgar Bronfman, head of the dynasty, was, for many years head of the World Jewish Congress (WJC), which is now lorded over by his son Matthew, who is chairman of the WJC’s governing board.

When McCain first ran for president, Edgar Bronfman was a contributor to his campaign. And at the time McCain included among his closest advisors the ubiquitous William Kristol of the stridently pro-Israel neo-conservative journal, The Weekly Standard, whose owner, media baron Rupert Murdoch, rose to wealth and power through the sponsorship of the Rothschild and Bronfman families.

Kristol has attended the secretive Bilderberg meetings that are sponsored jointly on an annual basis by the Rothschild family in partnership with their American confreres in the Rockefeller family.

So the McCain-Bronfman-Rothschild connection is intimate on multiple levels and explains much about McCain’s long-standing tendency to be an almost feverish advocate for Israel’s interests.

McCain himself has declared his allegiance to Israel, above and beyond U.S. interests. In a March 14, 1999, speech in New York to the National Council of Young Israel, McCain said:
We choose, as a nation, to intervene militarily abroad in defense of the moral values that are at the center of our national conscientiousness even when vital national interests are not necessarily at stake. I raise this point because it lies at the heart of this nation’s approach to Israel. The survival of Israel is one of this country’s most important moral commitments.

Thus, McCain would be willing to commit the United States to a war in defense of Israel, even if U.S. “vital interests are not necessarily at stake.” His endorsement of assaults upon the so-called “rogue” Islamic states is part and parcel of this policy, which hardly places America first.

In fact, the record shows that McCain has long been part of an elitist group promoting U.S. military action in defense of Israel. According to the Aug. 2, 1996 issue of the London-based Jewish Chronicle, McCain was a member of a little-known operation calling itself the Commission on America’s National Interest that issued a report rating Israel as a “blue chip” interest for the United States worth “spending serious treasure and serious blood on”—a conclusion many Americans might question.The report ranked Israel’s survival “on a par with preventing nuclear, biological and nuclear attacks on the U.S. as a vital American interest.”

The Chronicle summarized the report, quoting the group, with the headline: “Americans ‘should go to war to defend Israel.’”McCain has said that he is “driven” by “Wilsonian principles”—the internationalist philosophy that U.S. military might be used to enforce what critics have called the New World Order.

In 2006, for his enthusiastic efforts on Israel’s behalf, the Jewish Institute for National Security Affairs (JINSA) gave McCain its “distinguished service award” named in memory of the late Sen. Henry M. Jackson (D-Wash.) who was long one of the Israeli lobby’s favorite members of Congress.

To be hailed by JINSA, however, is a rather dubious honor, inasmuch as several people associated with JINSA including its founder Stephen Bryen, and Bryen’s close friend, Richard Perle (another regular attendee at the meetings of the Bilderberg group), as well as Paul Wolfowitz (former president of the World Bank), have all been investigated by the FBI in past years on suspicion of espionage on behalf of Israel. 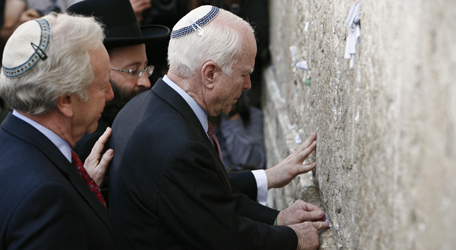 According to The Guardian: Judicial Watch also complained to the US election authority, the federal election commission, about Elton John’s involvement in Clinton’s campaign. The group alleged the British rocker broke US campaign laws by performing at a fundraiser for the New York senator. The Clinton campaign argued US law allowed the British musician to volunteer his time and solicit Americans for contributions.

The federal election commission is unlikely to act soon on the group’s McCain complaint as it is currently short-handed.

Trump Says He Had ‘absolute right’ To Give Classified Information To Russia – Anti...

“You just stuck your finger in my a–!”: D.C. Police Sexually Assault Man During...