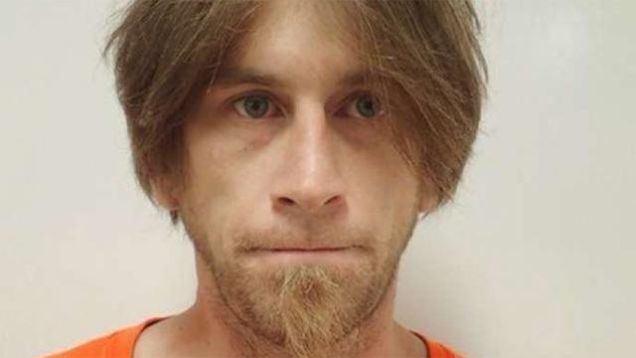 Anthony Hammond, 34, was arrested Saturday night in Clearlake, Calif., after yelling racist slurs at a black man while stabbing him with a machete, authorities say.

According to Lake County News, Hammond was arrested on an array of charges, including aggravated mayhem, battery with serious bodily injury, assault with a deadly weapon, felony resisting executive officer, hate crime, two misdemeanor charges of battery on a person, and obstructing or resisting a peace officer.

He was also arrested on two outside-agency felony arrest warrants.

According to the victim, Hammond was in the parking lot of the Beach Front Apartments screaming racist slurs at several people. Authorities say that Hammond then returned to his apartment before re-emerging wielding a large machete.

At that point, Hammond stabbed the victim in the shoulder while screaming racist slurs at him, Clearlake Police Sgt. Travis Lenz said. It is not clear what other wounds the victim suffered, but he was transported to a local hospital with serious injuries.

When authorities arrived on the scene, Hammond fled back into his apartment. A several-hours-long standoff ensued because authorities believed that Hammond had a gun.

Authorities did not find a gun, but the machete used in the hate crime was recovered at the scene, officials say.

This hate crime comes on the heels of two other stabbings by white supremacists last week, both of them fatal.

As The Root previously reported, white supremacist Sean Urbanski has been charged with assault and first- and second-degree murder in the stabbing death of 23-year-old Bowie State University student Richard Collins III.

Even though Urbanski is a member of a white supremacist Facebook group, the FBI is still trying to determine whether or not the killing was a hate crime.

Christian was verbally assaulting two girls on the train with Islamophobic hate speech when Meche, Best and a third man, Micah Fletcher, 21, stepped in to protect them, officials say.

Fletcher remains hospitalized in serious condition but is expected to survive.

As the Resistance Report’s Tom Cahill reports, white supremacist domestic terrorists have killed more people in the last week than refugees have in the past 40 years.

White NYPD Cops Taunt Black Students With Baton and Taser: ‘Do you want to ride...