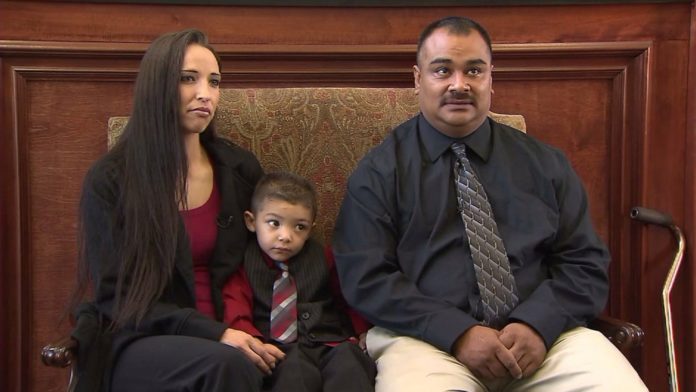 A California couple cannot sue the police officers that busted down their door without a warrant and shot them to pieces, the Supreme Court has ruled.

The decision, handed down on Tuesday, overturned a 9th Circuit Court of Appeals ruling that allowed Angel and Jennifer Mendez to recover damages in the amount of $4.1 million from the Los Angeles Sheriff’s Department.

The incident occurred in October 2010 after deputies received a tip and surrounded the home of Paula Hughes while searching for a missing parolee in Lancaster.
The Mendez couple, homeless at the time, were napping in a shack Angel had constructed in Hughes’ backyard. Deputies Christopher Conley and Jennifer Pederson reportedly barged into the shack without warning or a warrant.

According to reports, Angel woke up startled and grabbed a BB gun. In response, the deputies fired their weapons 15 times at the couple, severely wounding them.

Both survived but Angel was hit several times. As the result of his injuries, he required his leg be amputated below the knee. Meanwhile, Jennifer, who was pregnant at the time, was hit in the back. She would later give birth to a healthy baby boy.

In video filmed by police during the aftermath of the shooting, Angel can be heard pleading for his life and asking why the deputies had busted in the shack unannounced. Jennifer is also seen lying on the ground bleeding from her gunshot wound.

“If they would have announced and said, ‘police, open the door,’ I would have came out,” Angel later told reporters.

In August 2013, 9th Circuit Court of Appeals Judge Michael W. Fitzgerald awarded $3.8 million to Angel and $222,000 to Jennifer for damages related to Fourth Amendment violations. The couple went from being homeless to being millionaires.

For the full article please visit

NM Police Department Has Been Making Crack Cocaine, Arresting Those Who Buy It –...