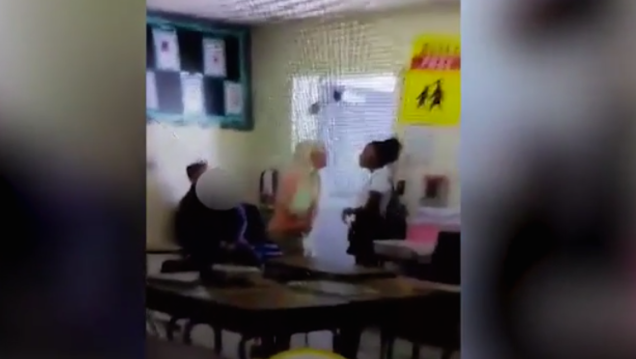 A North Carolina mother is furious after seeing video of a Cotswald, NC Elementary School teacher hitting her 11-year-old daughter with a broom.

“You cannot be a teacher and be able to teach children if you can lose your cool in a manner where you hurt someone else’s child,” said the outraged mom, Tiffany Fields, according to Fox 46.

The video was captured by a student in the classroom.

About 2 weeks ago, Fields went to the principal’s office to discuss an incident that occurred between her daughter and another student.

The video made its way around social media and seems to show something very different. It seems to show an abusive teacher followed by a school cover up.

“But the video I saw was the total opposite, it was a teacher losing control of herself and hitting a child in the head with a broom and lunging at her twice, forcing her into a wall,” Fields said.

Fields called the school, demanding an explanation. On Tuesday morning she was called into another meeting with school officials and a police officer. Fields said that in the meeting, the officer suggested the incident was her daughter’s fault, rather than the fault of the teacher who lost control and beat a student.

“You haven’t even talked to her yet and you’ve already tainted the whole investigation by letting me know that you believe these statements before even talking to my child,” she said.

Fields said she believes the teacher was out of line for the actions she took against the child.

The district is looking into the matter. As with all safety matters, school administrators would investigate to gain an accurate understanding and resolution to the matter. The incident was reported on May 16, at which time the school looked into the matter by reviewing school videotape, nothing was found to substantiate the allegation of an assault. This week a second videotape surfaced, which led the parent to contact CMS-PD to complete a police report. That process is underway.