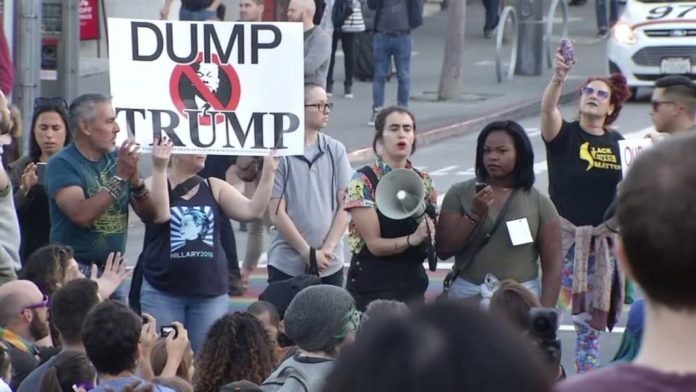 Protesters who gathered in Washington, D.C. to protest the inauguration of Donald Trump are now facing felony charges and sentences of 70 to 80 years. The dangerous precedent here is that this applies only to Trump protesters, which is something we expect to see in countries like North Korea, or Saudi Arabia, but not in the US where people are supposed to have constitutional rights.

That’s right, In the US, people get little to no jail time for rape, school cops get no jail time for molesting children, and cops can murder unarmed people with no consequences, but protesters are facing 80 years in jail.

212 protesters were arrested by the Metropolitan Police Department and initially charged with felony rioting, a crime that carries a 10-year prison sentence and a $25,000 fine. On April 27, the Superior Court of the District of Columbia added additional charges that include urging to riot, conspiracy to riot and destruction of property, according to Al Jazeera.

The possibility of ridiculously long-term prison sentences for these protesters could have a devastating future rallies, which is not good in these times of increasing protests against Trump and prejudice and hatred incited by the president.

Olivia Alsip, a 23-year-old from Chicago, said she never envisioned participating in the anti-Trump protests on inauguration day could leave her facing an 80-year prison sentence: “It seems that innocent until proven guilty is a falsehood—all the way from the prosecution and police to the people who had previously supported me in my activism.”

“I am wondering if my 24th birthday next week will be my last as a free person,” she said. “I’ve never in my life had such a painful and stressful experience. There are no words to convey the severity of this.”

“Our experience in police custody [that day] was totally dehumanizing. We were kettled, treated like animals and denied basic human rights and dignity,” she recollects. “People were forced to urinate on the streets and denied water and food.”

As political protests and civil disobedience reach their highest levels since the 1960s, 18 states have responded by proposing over 30 bills aimed at suppressing demonstrations by increasing and expanding penalties for protesters. A new law in Missouri prohibits protesters from covering their faces with masks or other disguises. Florida, Tennessee, Georgia and Iowa have introduced bills that call for increased penalties for blocking traffic and demonstrating on private property, reported Raw Story.

The ACLU called these new laws “unconstitutional,” saying they will  “fight in statehouses against any bill that violates the First Amendment.”

Several defendants pleaded guilty to get shorter sentences, but about 130 of the defendants have joined a “points of unity” agreement, collectively pledging to reject any potential plea deals and cooperation with prosecutors.

Is this really what the US has come to? People can get far more jail time for protesting Trump then they would get for armed robbery, rape, murder, selling crack, kidnapping…..

Is Your Phone Making You Less Likely to Trust Other People? – Anti Media...

Iraqi-American Family Arrested After Going to the Bank to Deposit Large Check From Home...

19 Of The Best Signs From Women’s Marches Around The World – Anti Media...