Twleve-year-old Ananya Vinay is this year’s winner of the American National Bee, taking home an impressive $40,000 cash prize- she follows in the footsteps of other American children of Indian descent who have taken home the prize every year since 2013. There have been studies trying to pin down why American children of South Asian descent do so well in competitions such as the spelling bee.

“Currently, South Asian ethnic groups constitute a diverse population representing a disproportionately high professional class doing very well in education. Having close-knit families is another factor behind the successive wins of Indian-origin children, according to NPR.“It’s stunning!” said Pawan Dhingra, a curator at the Smithsonian Institution’s Asian Pacific American Program. Dhingra said Indian Americans are likely to devote their time more on competitions and academic achievements, along with the fact they live in a tight knit family domain helps in the child’s training as well as their success in various contests.”

Despite this, in an interview with CNN, Ananya was debased and was asked to spell the nation’s current “buzz word”: ‘Covfefe’ insinuating that the made up bungle of a word was of Sanskrit origin and that Ananya should know it because of her background.

Keeping up with the age-old tradition, yet another Indian has won the American National Bee.

Ananya slogged through the 12-hour long competition and finally won it by correctly spelling the word ‘marocain’; a dress fabric made of silk or wool or both.

Where she was asked to spell the toughest word ever!

Because hey, don’t claim to be a fan of words till you know this word.

The anchor also seemed to believe that just because Ananya was of an Indian origin, she’d only be ‘familiar with Sanskrit’. 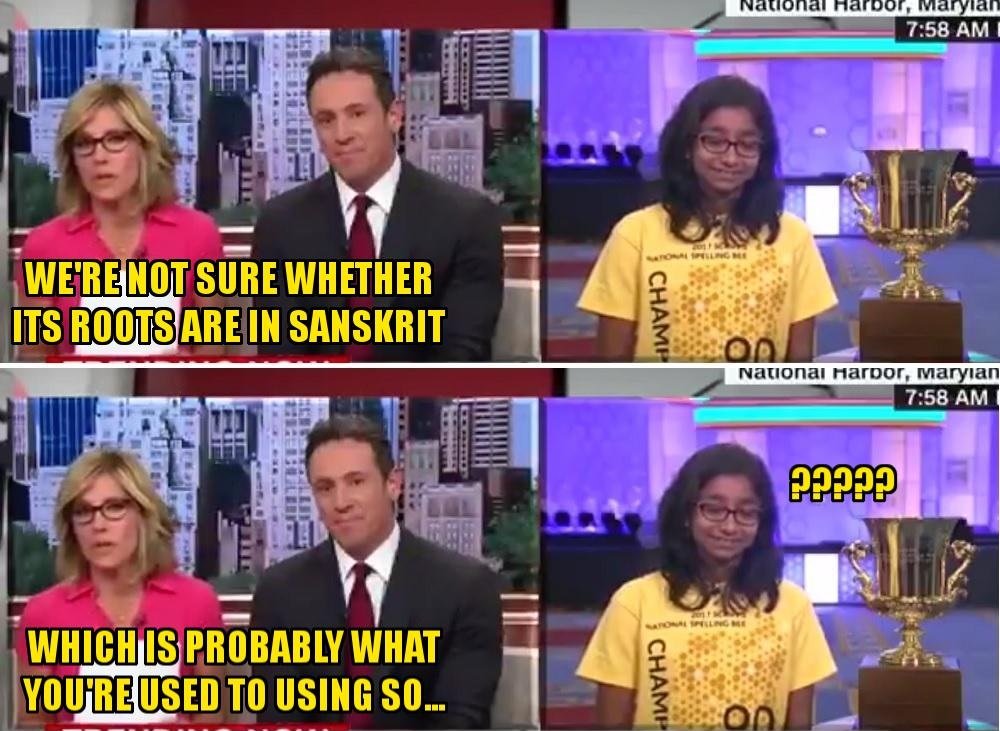 Soon after the clip was posted by stand-up comic Jeremy McLellan, it evoked some sharp responses from Twitterati.

12-year-old Ananya Vinay won the National Spelling Bee so naturally CNN had her on to spell “covfefe” and say some racist stuff to her. pic.twitter.com/Qirb8CpBV9

Even Silicon Valley star Kumail Nanjiani came out in support of Ananya.

Sanskrit? No she’s used to using English, in which she can spell every word. https://t.co/Vr2lDZQhxg

Flint Residents Now Have To Pay For Water They Still Can’t Drink – Anti...

Amazon Echo Turns Off When Owner Asks if Connected to the CIA – Anti...