Home News Muslims Have Surrounded Trump Tower From All Sides & Are Praying To... 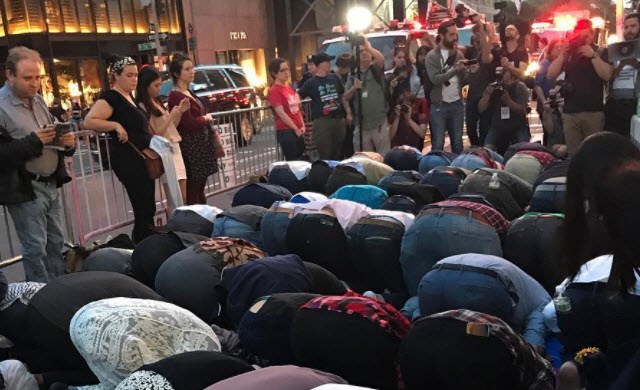 As tragedy and terror strikes the heart of the British people, there is something many across the nation and around the world must keep in mind. There is a difference between religion and religious extremism.

As easy as it is to give in to fear, we must keep in mind that searching for someone to blame is not the reason to hate an entire group of people who just so happen to worship a god by the same name. However, with the current administration that leads the American people, it’s easy to give in to the rhetoric they promote – a rhetoric of fear, xenophobia, and hysteria. However, the advocacy groups MPower Change and the New York State Immigrant Action Fund took to the streets in front of Trump Tower in New York City to promote unity between those of differing religious beliefs and protest Trump’s vile words.

‘Everyday American Muslims are confronted with bigotry and hate while commuting to work and school, applying for jobs, practicing their faith and simply living their lives.’

The group of Muslim individuals joined together at Trump Tower after they broke the sixth day of fasting for iftar during Ramadan. CNN reported:

‘This time they were not chanting or carrying signs, but gathering for iftar. It’s the first meal eaten by Muslims after sunset during Ramadan, the Muslim holy month of fast and prayer.’

Those of other faiths and differing spiritual beliefs gathered with the Muslim men and women to show their support and unity. Specifically, a group of Jewish men and women also joined the Muslim protesters to form a “protective perimeter” around them. Jews for Racial and Economic Justice tweeted:

‘Jews are forming a protective perimeter around our Muslim siblings as they prepare to pray. We keep each other safe.’ #IftarInTheStreets’

Jews are forming a protective perimeter around our Muslim siblings as they prepare to pray. We keep each other safe. #IftarInTheStreets pic.twitter.com/NTZSb6dRnq

Additionally, Sophie Ellman-Golan tweeted a picture of her standing with the group.

‘We’re locking arms as part of a protective perimeter as our Muslim siblings break fast. #IftarInTheStreets’

After they prayed, Independent reported they then ate rice, chicken, and pizza.

You can watch the protest below.