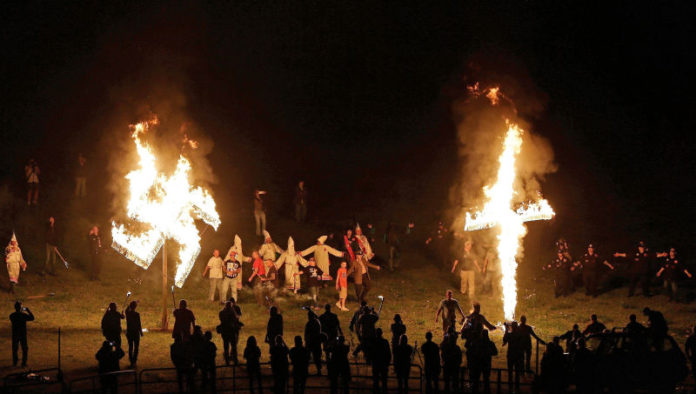 Organizers announced Monday that the next stop on the much anticipated, sold-out White Supremacist World Tour will be the cozy college town of Charlottesville, Va.

The Washington Post reports that the Loyal White Knights of the Ku Klux Klan have applied for a permit to hold a rally in Charlottesville on July 8. Another group of white nationalists who call themselves Unity and Security for America will sponsor the after-party Aug. 12 after applying for a permit that city officials say will likely be approved.

After a contentious City Council meeting Monday that included chants of “Fuck white supremacy,” representatives from the city acknowledged that there is probably little they can do to stop the rallies. Charlottesville’s director of communications, Miriam Dickler, reminded everyone that “people have a constitutional right to assemble” in accordance with their First Amendment rights.

The Unity and Security for America gathering is being organized by Jason Kessler, a blogger so racist that he was fired from his job at the conservative website the Daily Caller, which is akin to being kicked out of the skinheads for hating the Jews a little too much. Kessler—one of the many butt-hurt white boys upset over the removal of Confederate monuments—also believes in the bullshit premise of “white genocide,” once writing, “White people are rapidly becoming a minority in the U.S. and Europe,” and adding, “If we’re not able to advocate for ourselves we may go extinct.”

Kessler, who applied for his gathering’s permit on May 30 and attended Monday’s City Council meeting, was so roundly jeered by those in attendance that the meeting had to be suspended.

The town founded by Thomas Jefferson and home to the University of Virginia has become a battleground for people who oppose the removal of Confederate monuments. The city approved the removal of a statue of Robert E. Lee in 2012, but neofascists have lately made the statue a symbol of “political correctness gone mad,” because the white man’s ego has lately become as fragile as his toehold at the top of America’s social hierarchy.

Corey Stewart, a candidate for governor of Virginia, has also been a vocal advocate for protecting the statues, even though he hails from Minnesota and has no ties to the Confederacy—except for his whiteness. Stewart has given speeches in front of the statue and often tweets about his masturbatory love for the stone monuments to white supremacy.