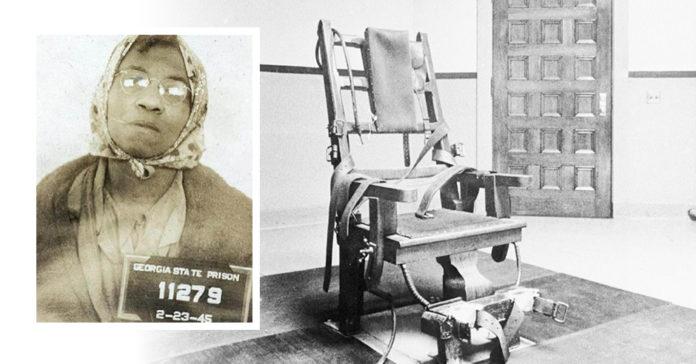 Lena was born in a former slave cabin, about five miles southwest of Cuthbert in Randolph County, Georgia. In 1944, at the age of forty-four in, Lena had never known anything except hard work and a life of poverty and despair. She helped support her mother and three children by chopping cotton, cleaning houses, and taking in laundry.

When Ernest B. Knight, a local gristmill owner, hired her to care for him while he recovered from a broken leg, it must have, at first, seemed like a windfall. Knight, a white man, was twenty-three years Baker’s senior. It was well known in Cuthbert that Knight was heavy drinker and that he often carried a pistol strapped to his shoulder. It wasn’t long before a sexual relationship developed between Knight and Baker. When she attempted to extricate herself from this relationship, Knight locked her in his gristmill for several days at a time, and as a nearby newspaper reported after her execution, kept her there as his “slave woman.”

At her trial, Lena explained how Knight approached her house and forced her to go with him on that Saturday evening of April 29. Baker had been warned by the county sheriff to stay away from Knight or that she was going to be thrown in jail; too, she was afraid of physical abuse by Knight (and once even Knight’s son had given her a terrible beating with a warning to stay away from his father). Therefore, as soon as she could, Baker gave Knight the slip and spent the night sleeping in the woods near the convict camp. On her way back into Cuthbert the next morning, Knight cornered her again and this time took her to the mill house and locked her in while he went to a “singing” (a form of religious celebration in the South) with his son. Lena soon became fed up with spending the sweltering day lying on an old bed in the gristmill. When Knight returned, she informed him that she was leaving. They, in Lena’s words “tussled over the pistol.”

At her trial when asked who pulled the trigger, she replied, “I don’t know.” She also explained the Knight was brandishing an iron bar that was used to secure the door to the gristmill and that she was afraid for her life.

Under the jurisdiction of Judge Charles William “Two Gun” Worrill, who presided at court with two pistols on the bench, the trial didn’t last even a full court day, taking a little over four hours. A former “lawman” out West, Worrill boasted of gunfights with twelve men, seven of whom died. Later he was appointed to the Georgia State Supreme Court by Governor Herman Talmadge, who later became a vehemently segregationist senator. The jury consisted of twelve white men (not unusual for 1944), but many of the jurors were good friends who attended the same small churches, socialized with each other’s families at card parties, and shared morning coffee at a local cafe.

In less than one-half hour the jury came back with a guilty verdict and Worrill sentenced Baker to death in Georgia’s electric chair, nicknamed “Old Sparky.” Her lawyer immediately asked for a new trial to be scheduled because “the verdict was contrary to the evidence and without evidence to support it … and the verdict was contrary to law and the principles of justice and equity.” He then just as immediately resigned as her lawyer. Later Lena was granted a sixty-day reprieve by then Governor Arnall, but the Board of Pardons and Parole denied clemency when they heard the case. Lena’s execution date was scheduled for March 5, 1945. On February 23 she was signed into one of the worst prisons in the United States, Reidsville State Prison, where she was housed in the men’s section until just a few days before her execution when she was moved to a solitary cell just a few feet from the execution chamber itself.

Lena went to her death calmly. Her last words were, “What I done, I did in self-defense, or I would have been killed myself … I am ready to meet my God.” Witnesses stated that it took six minutes and several shocks before the prison doctor pronounced her dead. Although Ernest B. Knight’s death had not made the headlines in the Cuthbert Times, Lena’s did. The paper crassly reported, “Baker Burns.”

Baker was the only woman in Georgia to be executed by electrocution. In 2005, sixty years after her execution, the state of Georgia granted Baker a full and unconditional pardon. A biography was published about Baker in 2001, which was adapted into feature film staring staring Tichina Arnold – The Lena Baker Story (2008).

Meet The Black Man Who Made Hundreds Of Racists Quit The KKK By Befriending...