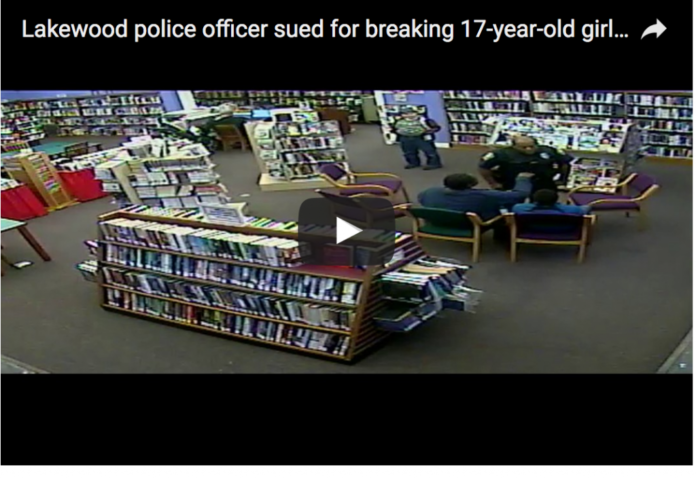 A mother filed suit against a Lakewood police officer who broke her 17-year-old daughter’s jaw in November as he wrestled the girl out of a branch of the Lakewood Public Library.

Sabrina Robinson alleged in the lawsuit that Lakewood officer Kevin Jones used excessive force and violated the teen’s civil rights when he grabbed her, shoved her into a book cart, put her in a full nelson headlock and kicked her out of the library’s Madison Branch, all without provocation.

The lawsuit, filed Monday in the U.S. District Court for the Northern District of Ohio, also alleges that the city of Lakewood failed to train its officers how to treat children with dignity and respect, and that Jones and other officers failed to provide medical care to the girl as she lay bleeding on the front steps of the library.

“As parents, we expect that our children will be safe at a public library and that library employees will protect them from violence, not attack them,” attorney Subodh Chandra, who filed the suit on behalf of the mother, said in a news release.

The encounter was captured by surveillance cameras inside the library and partially by Jones’ body camera.

Jones was moonlighting in uniform at the library, where the girl and her 11-year-old brother were regular visitors, the complaint says.

He shoved the girl into a rolling book cart next to the counter and she fell to the floor. Jones then put the girl in a full nelson, squeezing his arms around her armpits from behind forcing her arms into the air, the video showed.

He wrestled her out into the lobby and fell on top of the girl. She landed face-first with all of his weight on her, and the impact snapped her jaw, the lawsuit says.

He dragged her out to the front of the steps and waited for responding officers to arrive.

Blood dripped from her jaw onto the concrete steps, and Jones later used a bottle of water to rinse off the blood.

Jones and the other officers refused to call for an ambulance, the lawsuit says. Instead, they joked about clocking out early, and one officer told the girl to spit blood in the grass instead of on the concrete, the lawsuit says.

The girl was eventually taken to Cleveland Clinic, where doctors reset her jaw, the suit says.

Jones told Robinson that the girl was “mouthing off” to him, and refused to leave despite his orders, the suit says.

MASSIVE Fire Breaks Out At Pipeline In Paradis Louisiana And May Take DAYS To...