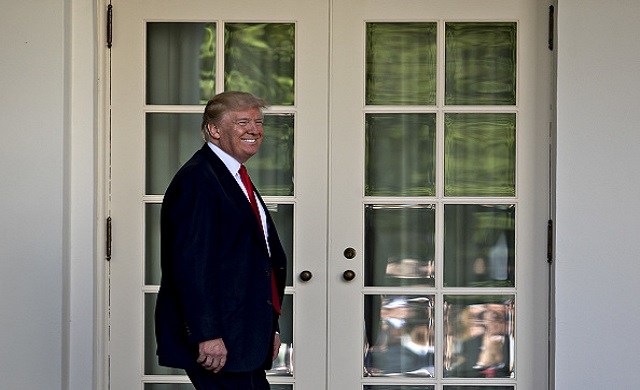 Who doesn’t enjoy a glass of fine wine after a long day of toiling? The piercing of the foil, the delightful “pop” of the cork, and the sound of the wine being poured into a beautiful glass, is enchantingly musical. Wine has been a staple drink through the ages, one of the earliest traces of wine was found in China and dates back to around 7000 B.C. It has been used for centuries as symbol of the blood of Christ in various Christian ceremonies, but did you know that the president has his very own winery? He does and it’s not too far from the White House.

Donald Trump has bragged that his 1,300-acre winery is the biggest on the Monticello Wine Trail, in Virginia. He bought the winery at a foreclosure auction in 2011, it once belonged to socialite Patricia Kluge. Trump boasted of his purchase saying:

‘She spent $200 million building the most incredible vineyard. I bought it for $6 million at auction. It was amazing.’

It is, no doubt, a very large piece of land, and with a large property comes the need to maintain it. So, who is running his winery now that he is in office? His son Eric Trump, of course! When asked about revenue he gave veiled answers saying the total revenues for the winery and it affiliates was between $784,000 and $2.6 million, but did not disclose if those numbers were directly related to winery operations.

Trump has been very vocal in his distaste for immigrants. During his campaign one of his main selling points was the building of a border wall between the United States and Mexico, which Donald proudly stated that Mexico would pay for. Recently, his proposed Travel Ban was rejected by the 4th circuit court. So, who does Donald have working there at his fine winery harvesting the grapes for his outrageously priced wine? Immigrants from Mexico! Kerry Woolard, who is the general manager at the Trump winery, bragged that they have 16 Mexican immigrants employed there, and that the winery plans to hire 23 more. Woolard said:

That is hardly worth bragging about, considering Trump’s ruthlessness in attempting to staunch immigration to America from various countries. The choice to hire Mexican workers for his winery is laughable.

Here is a video of Trump boasting about his vineyard on the campaign trail:

It Is Now Legal To Privately Smoke And Grow Marijuana In South Africa –...