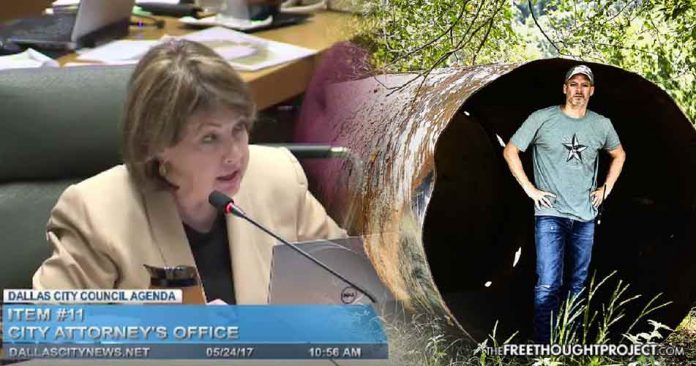 Monty Bennett’s quiet but intense demeanor, overflowing wallet, and stature as a head of a hotel investment company earn as many friends in high places as narrow-lidded grudges, but — love him or hate him — this Dallas businessman sits in the same precarious position as an untold number of ordinary property owners around the country.

Fighting the government to keep your private property is a battle arguably no one should be forced to endure, yet all around the United States, landowners like Bennett — whose ranch, The Lazy W, or officially, East Texas Ranch LP, has been in the family for generations — have been subjected to an unfortunately common tactic employed by an arrogant State run amok.

Bennett, however, has been fortunate enough in business dealings to afford a legal feud with the Tarrant Regional Water District — which seeks to usurp part of his ranch for an enormous water line — in an epic battle for control so revealing of the hubris of the State, everyone needs to take notice.

“It all started a few years back when the entity responsible for getting water to Fort Worth, the Tarrant Regional Water District, let it be known that it intended to take part of Bennett’s ranch and lay a pipe across it,” D Magazine reports. “The water district sued Bennett in an attempt to get the land. The case made its way to the Texas Supreme Court, where Bennett won on a procedural matter before being bounced back to a district court in Athens, where it now sits. In the meantime, his fight with the water district has grown from a pipeline right-of-way dispute into a battle over issues concerning accountability and openness in government.”

Since 2011, Bennett has made plain TRWD will not receive a green light to steamroll the issue, and he’s spent hundreds of thousands contesting eminent domain — one of the government’s most insidious legal holdovers whereby the thinnest of justifications for the usurpation of private property can be implemented to steal rights to your land — as long as that theft of property is conducive to infrastructure or some other public ‘need.’

Perhaps because Bennett’s skirmish with the State has dragged on for nearly seven years, the tidily-composed façade of public interest in which the City of Dallas has festooned its impetus for stealing part of the Lazy W went up in flames at a recent City Council meeting — thanks to voluminous hot air delivered from the lips of Councilwoman Sandy Greyson.

Greyson wasted no time clarifying the imperious nature of the city’s complaint against Bennett, asserting the wealthy businessman “cost Dallas taxpayers millions of dollars, and intends to cost us millions more — unless we settle with him by going around his property.”

Of course, Greyson, the rest of Dallas City Council, and TRWD have indeed ignored from the start the possibility this seven-foot water line could have been diverted through lands either not owned privately, or those privately held, but whose owner would have been amenable to the project.

Rather than even acknowledging such a possibility, Greyson instead vilified the legitimate land ownership — foisting Bennett’s concrete opposition as an ineluctable stance against the supposed greater good. She continued,

“Now, other, ordinary people — regular people like you and I, who can’t afford to fight the City of Dallas over an eminent domain case for years and years — I mean, we wind up getting our property taken.”

That scofflaw of a defense for offensive actions — a loose logical fallacy in appeal to authority — would win no support from those who have lost the rights to property in their possession to a State so behind in infrastructure innovation as to make eminent domain still a viable means to writ large any project it chooses.

It isn’t as if Bennett recently purchased the Lazy W — eminent domain claim already pending — the property has been in his family since 1955. Understandably, he does not want construction and the water line to invade the tranquility of the property — or to upset the ecosystem maintained in a wildlife refuge there.

Bennett has gone so far as to install a cemetery on the land, because, under Texas law, that feature is exempt from “taxation, seizure by creditors and eminent domain.”

That matters little to an obdurate council intent on implementing a project to the letter of its original plans — rather than conceding a new route for the water line could be a tenable solution for all sides involved.

Calling the government’s theft-of-private-property plan “necessary,” because, Greyson sanctimoniously postures, “we need water lines. We need some of these public improvements.”

Nominally acknowledging the seizure of land through eminent domain might ruffle feathers on occasion, Greyson added, “it’s just infuriating, that if you are rich enough, you can hold the city hostage for years, and then get what you want. There’s something really wrong with that.”

Thus, all signs point to the embittered city councilwoman’s issues with the law — that is, when it works in favor of a people attempting to resist its oppressive clutches.

Let that sink in for a moment.

To Greyson and those aligning, a man fortunate enough to wage a viable defense against the government should be vilified as a nuisance and public enemy simply because he hopes to maintain the integrity of his land — tacitly implying anyone without a fortune in their defense is a better citizen, because they would have no choice but to succumb to the whims of the State.

In fact, continuing her baffling oratory — incidentally evincing why the State just might favor the poor over the rich in their lack of fiduciary competency to fight the taxpayer-funded government — Greyson makes no bones about her ire over private citizen land ownership.

Perhaps the biggest takeaway for anyone not able to obtain as lucrative a profession as Bennett is the unabashed joy the government finds in economic superiority which allows it to trample rights of ownership — as if having less in the bank somehow makes one’s land a commodity ripe for the plucking.

Worse, though, Greyson tacitly champions the stratification of wealth as an obstacle of the State — if you’re wealthy enough to afford it, government cannot possibly be as formidable a foe as would be the case for someone whose legal defense lacks monetary teeth.

But it isn’t differences in worth or income comprising the issue here.

Rather, that the State feels running roughshod over someone’s rights to property is perfectly defensible in any situation is a condemnation of government — its manipulation, its effects on procuring lucrative professions, and its ambitions writ large, regardless of the name typed on a piece of paper proving that land cannot be taken forcefully and without reasonable just cause.

Regardless of years of extenuating details surrounding the Lazy W and Bennett’s family property, that the State through the words of Greyson shamelessly flaunts its clout — and lack thereof, in the face of money — proves eminent domain the sham it always has been.

Whether or not the arguably most hated government stipulation in existence began as a means to ensure the public good matters not if its modern iteration amounts to theft at will — and particularly not so when the content of one’s wallet decides the route for projects like a water line.

Eminent domain exists because the right to own property threatens government at its most vulnerable point — control.

Without that, the State is little more than an entity fleshed out on paper wishing desperately you would just get out of its way.

By: Claire Bernish  From:  The Free Thought Project