Home News Cop Who Killed Philando Castile Uses The Standard ‘I Thought I Was... 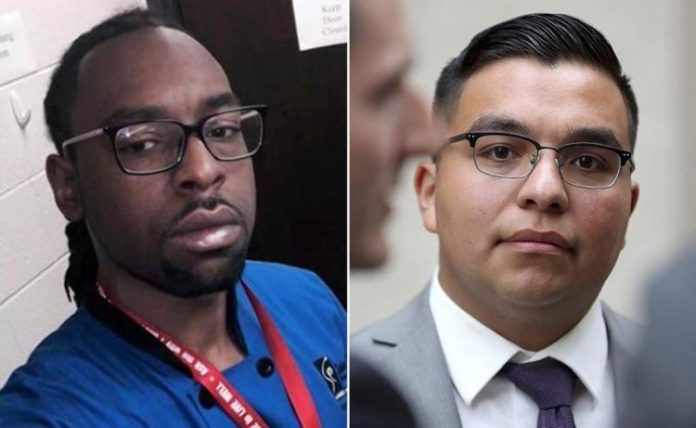 We see it so often, it’s almost like it is part of the training. A police officer kills someone and just has to say “I feared for my life”, or “I thought I was going to die” and the officer typically walks free. A classic cop out, right?

Now we have the police officer who fatally shot Philando Castile saying, “I thought I was going to die,”to defend his actions.

As he wiped away some tears, Officer Jeronimo Yanez explained on Friday why he chose to shoot Castile during a traffic stop for a non working brake light while Castile’s girlfriend and her 4-year-old daughter watched.

Yanez claims he had no other option but kill when Castile did not follow the officers directions.

“I had no other choice,” said Yanez during the first day of testimony in his murder trial. “I was forced to engage Mr. Castile. He was not complying with my directions.”

Yanez, 29, is charged with second-degree manslaughter and two counts of reckless discharge of a firearm in the July 6, 2016, shooting of Castile, 32, in Falcon Heights, Minn. Castile’s girlfriend, Diamond Reynolds, live-streamed the aftermath of the shooting on Facebook, as Castile bled to death on video.

The Star Tribune reported that Yanez testified he felt his life was in danger when he saw Castile “grab a gun” near his right thigh after he had been ordered not to reach for it. Yanez told the court that visions of his wife and baby girl flashed through his mind.

Regarding the gun in question, The Chicago Tribune reported Castile was licensed to carry, trained to use safely and instructed to tell authorities about it when stopped.

The St. Anthony police officer began to cry. “I did not want to shoot Mr. Castile at all,” he replied. “Those were not my intentions.”

Yanez was parked in his squad car when he saw Castile drive by on July 6 and they supposedly made eye contact where he got “strong suspicions” about him.

“He gave me a deer-in-the-headlights look,” Yanez said. “It’s a trigger.”

Yanez said Castile had a nonworking brake light, which gave him legal grounds to stop him.

He claimed he smelled marijuana as he walked up to Castile’s Oldsmobile. He said he told him about the brake light and asked for his license and insurance.

“Sir, I have to tell you that I do have a firearm on me,” Castile volunteered, according to the criminal complaint filed against Yanez.

Castile reached to his right (perhaps to hand the officer his license) and allegedly made a C-shape with his right hand, Yanez said, saying “he continued to pull his firearm out of his pocket.”

The Star Tribune said Kelly tried to head off the prosecution’s cross-examination by asking Yanez why he told his supervisor after the shooting that he “didn’t know where the gun was.”

“I was telling [my supervisor] I didn’t see the gun until I saw one,” Yanez answered. “I didn’t know where it was on Philando Castile’s person.”

Prosecutors believe that Yanez’s failure to use the word “gun” to alert responding officers at the scene and his language with investigators indicate that he never saw Castile’s gun, which was later recovered from his right front shorts pocket.

“Correct,” Yanez said. “… My mind was all over the place, because I was under a tremendous amount of stress. It was a firearm.”

Jurors heard testimony from several witnesses this week and are expected to begin deliberations Monday after final arguments.

North Korea Warns ‘Thermonuclear War May Break Out At Any Moment’ – Anti Media...