Home News Racism In ND, A Man Kills Native, Serves 4 years, Get Out... 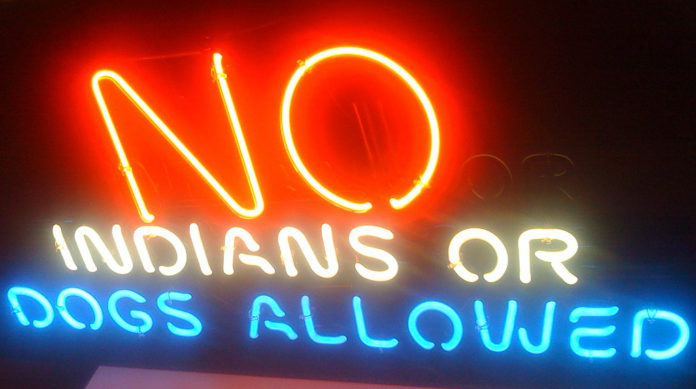 From murder to sex trafficking, the state has a long history of racial discrimination against people of color

In 1868, the fourteenth amendment to the United States Constitution—the Equal Protection Clause—took effect, providing that “no state shall deny to any person under its jurisdiction equal protection under the law.” That same year, several tribal nations and the U.S. Government signed the Treaty of Fort Laramie, which, among other things, delineated the boundaries of the original territory of the Great Sioux Nation, a part of which would eventually become the Standing Rock Reservation.

Since then, the Laramie Treaty has been violated through and through. Now, this week a stunning example of North Dakota’s failure to respect the fourteenth amendment was uncovered, thanks to investigative news publication The Intercept.  It published an astonishing report that, if accurate (and no information has emerged to discount it) confirmed what many involved with the #NoDAPL movement suspected all along: The State of North Dakota worked directly with and for Energy Transfer Partners, owner of the pipeline, to stifle and undermine the efforts of American Indian activists and the Standing Rock Sioux Tribe.

That’s right—rather than providing equal protection to SRST, the state spent millions to forward the agenda of an oil company.

If you weren’t already certain, you can now pretty much be rest assured that if you are in the state of North Dakota, and if you are anything other than white Christian, the law is decidedly not on your side.

Let’s take a look at just a few of the most glaring recent examples of bias and discrimination which continue to taint North Dakota’s criminal injustice system:

1. GETTING AWAY WITH MURDER

Schumacher and his lawyers convinced the jury that he acted in self defense, and constructed a story about having shot his gun by accident. He was ultimately found guilty only of negligent homicide in the shooting of Clauthier, and was found not guilty of attempted murder or negligent assault in the shooting of Boswell. For killing and attempting to kill two innocent Native boys, he was sentenced to only five years, and actually served only four in the state penitentiary.

Years later, in 2016, police were called to Schumacher’s house in Fargo due to a domestic violence dispute (he had a record of assaulting his wife). Schumacher shot and killed one of the responding officers, 33-year-old father of two, officer Jason Moszer.

Ever since the oil boom struck the Fort Berthold reservation in 2009, crimes like murder, sexual assault, drug activity, and sex trafficking have gone up at least threefold. Non-Native oil workers from out of state have largely been the perpetrators of these crimes, and the Native people whose territory they tread have been the victims.

So did the state react? Sort of.

The Washington Post reported in 2014 that Tim Purdon, State’s attorney at the time, described ramping up resources to prosecute drug traffickers and drug offenders on the reservation. But what of the overworked, understaffed reservation police forces who needed help keeping things under control on a day-to-day basis? Nothing.

North Dakota proved to us in 2016 by infiltrating the Standing Rock reservation that they had the means and the power, when they wanted, to bring in hundreds of officers, extra equipment, and any other type of resources they may need to heavily police an area in question. So, why didn’t they choose to send those resources to the Fort Berthold reservation, where hundreds of women remain in danger every day?

I would still like to see North Dakota spend the same amount of money on protecting Fort Berthold as they did surveilling, militarizing, and harming the people at Standing Rock.

In 2015, a 27-year-old white man, Matthew Gust, threw a molotov cocktail into a Somali restaurant in Grand Forks, igniting the building in flames and destroying the restaurant. Thankfully, nobody got hurt. It was a hate crime, based on the ethnicity of the owners.

Gust was charged with “malicious use of explosive materials.” He took a plea deal, pled guilty to arson and committing a hate crime, and ended up with a 15-year prison sentence.

I’d be willing to bet that if a Somali man put an explosive into a white-owned restaurant and subsequently admitted that it was due to his hate for their race, he would be in prison for life and charged with some type of terrorism.

Craig Cobb, a known white supremacist whose extreme religious beliefs are based on white superiority, has been bouncing from small town to small town in North Dakota for several years attempting to buy up property and start a white supremacist enclave. The recently released documentary “Welcome to Leith” outlines his efforts.

Cobb isn’t always welcomed with open arms, but he is consistently met by law enforcement and small town administrators with an air of,  “Oh well, he can believe what he wants to believe and there’s not much we can do about it.”

I guess it’s true that nobody can suppress his freedom of speech, nor should they try, but when a crazed man walks around publicly wielding a firearm and shouting threats and racist slurs at people, you would think police officers would respond with ferocious vigor—much like they did against the protestors at Standing Rock who were armed with nothing but prayer staffs and eagle feathers.

Finally, a look at the population of North Dakota’s criminal justice system reveals the truth in numbers: Native people make up only 5-percent of the state’s population, but are represented at much higher rates than any other race in state prisons, county jails, and as defendants in federal courts. Native people also receive much harsher sentences for the same crimes – so much so, that a federal panel has finally been set up to investigate the issue. Something is seriously wrong with those numbers. They scream injustice.

No Punishment for Florida Cop Accused of Telling Teen to Strip Naked or Be...

Man Who Murdered Mike Brown Admits Everything You Think You Know About His Death...