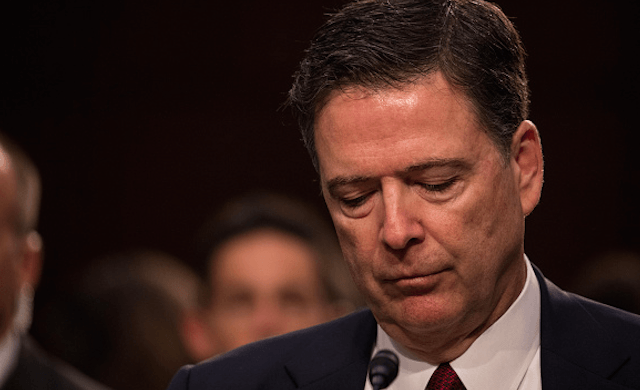 On Thursday, during his testimony before the Senate Intelligence Committee, former FBI Director James Comey said he believed President Trump fired him from his position because of his department’s investigation into Russian interference in the 2016 election.

‘I know I was fired because of something about the way I was conducting the Russia investigation was in some way putting pressure on him, in some way irritating him, and he decided to fire me because of that.’

Comey went on to say that Trump also urged him to end his investigation into disgraced National Security Adviser Michael Flynn, who was forced to step down from his position after it was discovered that he lied to Vice President Mike Pence about conversations with a Russian ambassador.

He also told Democratic Senator Mark Warner of Virginia his “gut” instinct led him to keep detailed notes on his meetings with the president, as he feared Trump might lie about what was said.

‘The nature of the person. I was honestly concerned he might lie about the nature of our meeting, so I thought it really important to document.’

It’s worth noting, however, that Comey only wrote a very brief memo following a serious meeting regarding national security with former President George W. Bush, and never once wrote anything after meeting with former President Barack Obama. Regarding the detailed memos he kept about Trump, he said:

‘I knew there might come a day when I might need a record of what happens, not only to defend myself but to defend the FBI and our integrity as an institution and the independent investigative function. That’s what made this so difficult.’

But now it seems that conservatives are prepared to do anything to defend their supreme leader, including attempting to discredit the former FBI director by twisting his words.

‘#BigLeagueTruth: Comey testified under oath that @POTUS never asked him or anyone else to end any investigation. #ComeyHearing’

#BigLeagueTruth: Comey testified under oath that @POTUS never asked him or anyone else to end any investigation. #ComeyHearing pic.twitter.com/8hSdp47SV5

The tweet linked a video from his testimony from May 3, when Sen. Mazie Hirono (D-HI) asked him if “the attorney general or senior officials at the Department of Justice” attempted to block his department from investigating Russian interference in the 2016 election. Comey can be heard in the video responding, saying: “Not in my experience.”

As Media Matters notes, however, Comey never actually contradicted himself, such as the RNC’s tweet suggests. The video clip is from his first testimony, when he was speaking about the Justice Department, not President Trump himself.

In an effort to set the record straight, Sen. Hirono provided Media Matters with the following statement:

‘If you listen to the exchange, it’s clear that I only asked former Director Comey about pressure from officials at the Department of Justice, but the RNC chose to move forward and take a far-right conspiracy theory as fact. This sends a clear message that Republicans are willing to share fake news and dangerous narratives in their quest to deny Russian interference in our elections. Unfortunately, we’ve come to expect no less from the mouthpiece of an Administration that deals in alternative facts.’

The false claim was also circulated online by alt-right provocateurs and fake news sites before more traditional right-wing news sources picked up the story. The worse part? The false claim even affected the stock market, according to reports from CNBC.