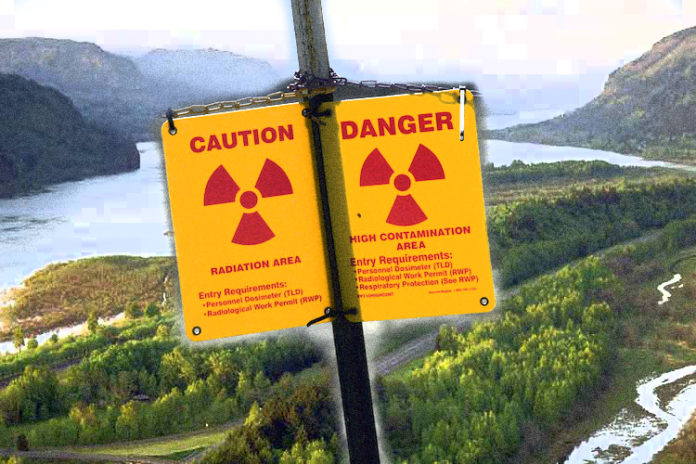 A member of the U.S. Environmental Protection Agency recently informed the public that radioactive waste from the decommissioned Hanford nuclear power plant is ‘flowing freely’ into the Columbia river.

The mighty Columbia river is the largest river in the Pacific Northwest region of America, flowing down from Canada, winding through eastern Washington state and along the border between Oregon, ultimately moving through downtown Portland and into the Pacific. The Hanford site, located near Kennewick, WA is up river from a million or so people, not to mention the wildlife.

Constructed in the 1940’s as part of the Manhattan Project, the plant was decommissioned after the Cold War, leaving behind some 53 million gallons of high level radioactive waste. Proposed as a Superfund site in 1988, Hanford is an uncontrollable ecological and public health disaster.

As noted in the list of national Superfund sites:

“Soils contaminated by radiological and chemical waste from plutonium manufacture for the Manhattan Project and subsequent activities. Groundwater contaminated by strontium-90, carbon-14, tritium and hexavalent chromium and discharges into the Columbia River, which is the water supply for over 170,000 people.[33]

Groundwater and soil contamination by tritium, uranium, cyanide, carbon tetrachloride, technetium and other substances from processing, finishing and managing nuclear materials including plutonium for nuclear weapons.[34]

Groundwater contamination by uranium, VOCs, strontium-90 and tritium from nuclear fuel fabrication. Soil contamination by uranium, cobalt-60, copper, PCBs, chromium and possibly other substances. Uranium and TCE have been detected in groundwater adjacent to the Columbia River, which is used for drinking water for over 170,000 people.[35]” [Source]

A recent review of the site concluded that contaminated ground water is contaminating the Columbia.

The announcement came as part of a five-year review of cleanup measures taken at the Superfund site. Officials with the EPA and the Department of Energy said at a meeting Wednesday that the review showed most of the cleanup actions at Hanford were properly “protective,” meaning the public was shielded from the worst of the site’s estimated 500 million gallons of potentially radioactive waste.

Radioactive sludge in shuttered reactors, contaminated soil in landfill sites and equipment that was once used to refine the uranium that fueled the nuclear bomb dropped on Nagasaki were all properly contained, according to the report.

But there was a glaring exception: groundwater contaminated with hexavalent chromium and strontium-90 was still flowing into the nearby Columbia River, according to a presentation from Mike Cline, director of the Department of Energy’s Soil & Groundwater Division.

Remarkably, there are not enough funds at present for necessary actions to stop the leakage, especially in the face of impending environmental cuts by the Trump administration.

“We don’t have enough funding as it is to do the work that needs to be done,” said Randy Bradbury, spokesman for the Washington state Department of Ecology’s Hanford Nuclear Waste program. “So the cuts are very concerning.” [Source]

Ultimately, this insanity highlights the obvious problem with nuclear power that no one who profits from this sector of the energy industry will talk about: nuclear power is impossible for us to contain. And in a nation with unlimited funds for war materials and prison complexes, it’s an indictment of our values that we don’t have the resources or the will to protect our land and our people from disasters like this.

Vic Bishop is a staff writer for WakingTimes.com and OffgridOutpost.com Survival Tips blog. He is an observer of people, animals, nature, and he loves to ponder the connection and relationship between them all. A believer in always striving to becoming self-sufficient and free from the matrix, please track him down on Facebook.

This article (Radioactive Waste Flowing Freely into Columbia River Because There’s No Money to Stop It) was originally created and published by Waking Times and is published here under a Creative Commons license with attribution to Vic Bishop and WakingTimes.com. It may be re-posted freely with proper attribution, author bio, and this copyright statement.

US Senators Pushing For 20 Years In Prison For Citizens Who Support Boycotting Israel...