Home News No One Knows How Many Native Women Have Disappeared – Anti Media... 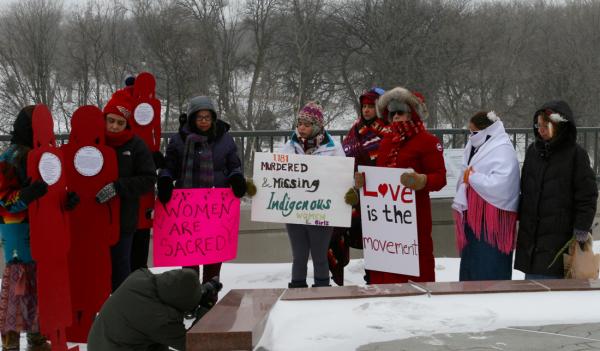 Although Trudi Lee was only 7 when her big sister went missing back in 1971, she wept when she talked about that traumatic event 45 years later. “Sometimes I would catch our mom crying alone,” Lee said. “She would never tell me why, but I knew it was over Janice.”

Janice was 15 when she went missing near the Yakama reservation in Washington. Although her parents reported her missing to tribal law enforcement, there was never any news of the lively, pretty girl. “Mom died in 2001 without ever knowing what happened,” Lee said. “We still think of Janice and would at least like to put her to rest in the family burial plot.”

“It happens all the time in Indian country,” said Carmen O’Leary, coordinator of the Native Women’s Society of the Great Plains in South Dakota, a coalition of Native programs that provide services to women who experience violence. “When Native women go missing, they are very likely to be dead.”

Indeed, on some reservations, Native women are murdered at more than 10 times the national average, according to U.S. Associate Attorney General Thomas Perrelli, who presented that gruesome statistic while addressing the Committee on Indian Affairs on Violence Against Women in 2011.

Unlike Canada, where indigenous leaders and advocates have pressured the government to begin to confirm the numbers of missing and murdered indigenous women, the U.S. has done little to address the issue.

Although the Violence Against Women Act (VAWA) and the Tribal Law and Order Act (TLOA) have helped bring attention to this high rate of violence and have begun to address gaps in law enforcement for tribes and federal authorities, there is no comprehensive data collection system regarding the number of missing and murdered women in Indian country.

Under VAWA 2005, a national study authorized by Congress found that between 1979 and 1992 homicide was the third leading cause of death among Native females aged 15-34, and that 75 percent were killed by family members or acquaintances.

And that horrific toll might actually be higher. “The number of missing Native women was not addressed in the study,” noted Jacqueline Agtuca, lawyer and policy consultant for the National Indigenous Women’s Resource Center, (NIWRC). “Currently, we do not have adequate information on the numbers of missing Native women in the U.S.”

The high rates of sexual violence against Native women are inextricably tied to the likelihood of them going missing; violence, disappearance and murder are closely interconnected. “Tribal leaders, police officers, and prosecutors tell us of an all-too-familiar pattern of escalating violence that goes unaddressed, with beating after beating, each more severe than the last, ultimately leading to death or severe physical injury,” Perrelli said in his 2011 speech.

According to advocates like O’Leary, there is little hard data about missing and murdered women, only anecdotes that tell of the pain, loss and anger of loved ones. “Missing and murdered Native women are a non-story in this country. You really don’t hear about them unless you happen to know the family. Officially, these cases seem to get brushed under the rug. No one wants to talk about them,” she said.

According to NamUS, the National Missing and Unidentified Persons System, there are approximately 40,000 unidentified human remains either in the offices of the nation’s medical examiners and coroners or that were buried or cremated before being identified. NamUs, operated by the U.S. Department of Justice, (DOJ) is a national repository and resource center for missing persons and unidentified decedent records. It offers a free online search system.

Troy Eid, former U.S. attorney for the state of Colorado notes that protocols for taking missing person’s reports and sharing with other agencies vary widely among tribal law enforcement. “Some offices may simply write down the information or may not record it at all,” Eid said.

Eid served on the Indian Law and Order Commission created under TLOA. After two years of field research, he and fellow commissioner released the report, “A Roadmap for Making Native America Safer,” in 2013. The report describes law enforcement jurisdiction in Indian country as “an indefensible morass of complex, conflicting and illogical commands,” and blames the U.S. government for creating the situation.

Of the 12 tribal law enforcement agencies contacted for this article about procedures for taking missing person’s reports, just three responded: The Navajo Nation of Arizona, New Mexico and Utah, the Barona Band of Mission Indians in California and Red Lake Band of Chippewa in Minnesota. All reported that they have designated protocols for taking reports as well as computer terminals that can access the National Crime Information Center (NCIC) database.

As far as tribal law enforcement working with other agencies, federal and local, Eid noted that those relationships also vary widely: “The relationships swing from good to almost nothing, and even to outright hostility.”

To help address such issues under the direction of the 2010 TLOA, the DOJ announced the launch of the initial phase of the Tribal Access Program for National Crime Information, TAP, in 2015 in which tribes would be able to both report and access crime information in the federal NCIC database. Ten tribes were selected to participate in the pilot program and were to receive NCIC terminals. DOJ officials did not respond to questions about the number of tribes that currently have access to the NCIC terminals nor to questions regarding funding for future tribal access.

Although the Tulalip Tribe is among the 10 participating in the project, they have yet to receive a NCIC terminal despite offering to pay for it, according to tribal attorney Michelle Demmert. “We need full access now to this database. I doubt that any other municipality or state would need to work so hard to justify meeting the needs of the community,” she said.

Native peoples are not the only ones who are underserved by America’s approach to helping to find and identify missing persons. Reveal, a project with the Center for Investigative Reporting, published an extensive investigation in 2015, “Left for Dead: How America Fails the Missing and Unidentified, “ which lays out how U.S. authorities mishandle these reports. According to the article, the FBI refused to provide access to its data on unidentified remains despite requests from Reveal under the Freedom of Information Act.

Clearly, missing persons and unidentified remains are not a top priority for law enforcement. But for Native women, whose numbers may be greater and whose loss may go unreported, the issue reflects a wider systemic failure of the U.S. to meet its trust agreement with tribal nations.

“There is so much fear and distrust of law enforcement among our people that they are often reluctant to report loved ones as missing or to report sexual assault,” noted O’Leary.

This fear adds to the lack of accurate data not only about missing and murdered women but also about those who have been raped. Contacting law enforcement can bring unwanted scrutiny to women who are victims of violent crime.

As an example of that, O’Leary pointed to the 2015 abduction of Edith Chavez from Minnesota, in which Chavez suspects she was drugged and taken to Williston, North Dakota. She managed to escape and reported the incident to Williston police who refused to take her statement and instead checked her record. The result? They detained and charged her for an unpaid traffic ticket from 2011.

According to The Guardian, the Williston police department did not respond to requests for comment but instead issued a press release claiming Chavez had smelled of alcohol and had been to a casino. Police later dropped charges against Chavez.

“Native women are not often seen as worthy victims. We have to first prove our innocence, that we weren’t drunk or out partying,“ said O’Leary.

According to Laura Madison, who along with Lauren Chief Elk, helped launch the Save Wiyabi Project, “Indigenous women go missing twice: once in real life and a second time in the news.”

Two Nuclear Leaks In The UNITED STATES. One Is Likely Worse Than Fukushima –...