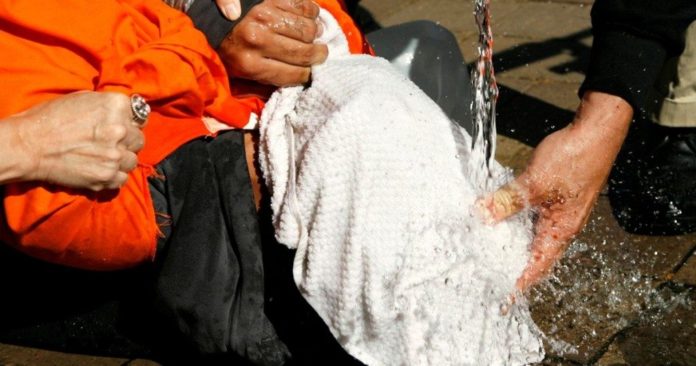 On one occasion, a group of Sweetwater cops ransacked a man’s home, stealing computers, iPads, TVs and even the man’s truck. Another day, the cops badly beat a suspected thief for hours inside the Sweetwater station, masking the sounds by blaring reggaeton music, all while taking “trophy” photos, reported The Miami Herald.

Another suspect was pummeled and “water-boarded” in a dark room, until he falsely confessed to a burglary. The man had to be hospitalized with broken bones in his face and a fractured rib.

Water-boarding simulates drowning and is considered to be a form of torture.

These are only a few of the allegations against a group of Sweetwater police officers, a pair of whom were charged Tuesday in what prosecutors called a “disturbing pattern of theft and physical violence against citizens.”

A third dirty cop, Octavio Oliu, was charged years ago for using a stolen license plate to cheat road tolls. He too will face racketeering charges.

Oliu’s defense attorney, C. Michael Cornely, held himself to the stereotypical dirty lawyer blaming the victims as he called many of the victims “scoundrels” and crooks making false allegations against the police officers.

“We’ve been defending this case for over a year,” Cornely said. “They keep adding defendants. They’re stalling. It’s like they won’t want to go to trial and get the truth out.”

Tuesday’s arrest upset Reny Garcia’s lawyer, Douglas Hartman, who said federal authorities long ago cleared his client and that the sergeant had even returned to work. “It’s an absolute outrage,” Hartman said. “My guy was cleared by the feds. He’s a great, hard-working cop,” reported The Herald.

“The arrests are part of a larger investigation based on decades of corruption, cultivated from the top down, at the Sweetwater Police Department and city,” the Florida Department of Law Enforcement said in a press release.

“The investigation has not revealed criminal wrongdoing of the current Sweetwater police administration, and its chief has fully cooperated.”

The feds worked alongside Miami-Dade Police and the FDLE, which spent years compiling the alleged wrongdoings. In all, they listed eight separate episodes of beatings or theft, or both, in 2012 and 2013.

The Herald listed some of the allegations:

▪  Reinel Valdiva, the man who was water-boarded, also had his truck seized by police and Southland Towing; the vehicle disappeared even though a judge ordered it returned. As for Valdiva’s beating. he described “William Garcia making strange movements, imitating karate-type moves and hitting him the ear and rib area.”

▪  The officers essentially stole one man’s pickup truck, using it as a police vehicle – installing sirens and lights – while racking up toll violations.

▪  The trio of officer, without permission or a warrant, barged into one couple’s house in Homestead, stealing money and electronics and a Nissan Altima, while William Garcia made racists remarks about Colombians. One of the residents was also severely beaten – he told investigators “he thought he would die from the beatings.”

The case will be tried by the Attorney General’s statewide prosecution office.

Watch: Neo-Nazi Gets Knocked Out For Harassing Black Man