Home News MONSANTO’S GLYPHOSATE LINKED TO THE DEATH OF OUR OCEANS AND CORAL REEFS... 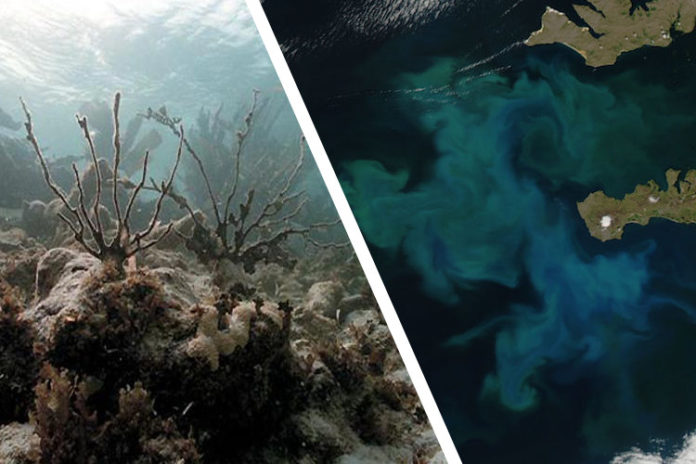 Monsanto’s glyphosate, aka Roundup, is the most heavily used agricultural chemical in history, with some 3.5 billion plus gallons of the herbicide being used in the Unites States alone since its introduction in 1974. Worldwide use of glyphosate is rising fast, in spite of very legitimate concerns that the chemical is causing widespread health problems including liver disease and even cancer in humans.

Contamination in rural areas in Argentina have caused serious public health issues, and the chemical is reported to be found in many products in our food supply, including many common children’s cereals, and even in breastfeeding mother’s milk, although this last claim is vehemently denied by Monsanto.

Agrochemicals are now routinely found in homes, schools and drinking water nearby soy, cotton and corn fields. They are handled inside residential neighborhoods with little training or compliance regarding protective gear and mixing concentrations. Pesticide storage containers are often reused in farming communities, at times to even hold drinking water. [Source]

The application of the toxic weed and plant killing chemical is now also linked to changes in the ocean, as some researchers are making the link between runoff of glyphosate from farmland into our oceans and seas and a global collapse in phytoplankton and coral reefs.

In an Argentinian study from 2011 entitled Effects of Herbicide Glyphosate and Glyphosate-Based Formulations on Aquatic Ecosystems, researchers outline the effects that glyphosate has on phytoplankton, an ocean-blooming algae, which is the foundation of the food chain for the entire sea. If the phytoplankton dies, then the entire ocean ecology is disrupted, leading to increased temperatures and acidification.

“Reviewing the available information on toxicity of glyphosate and its formulations on different groups of aquatic organisms, we have concluded that they are hazardous to the www.intechopen.com 360 Herbicides and Environment aquatic environment.” [Source]

This is especially significant in light of major damage being reported to the world’s coral reefs, and recent news of a massive coral die off in the Great Barrier Reef has alarmed many. While some maintain that reef die-offs of this scale are linked to ocean acidification and rising ocean temperatures, those concerned with glyphosate toxicity point out that if the herbicide can kill ocean-borne phytoplankton, the primary food source of coral, then it is easy to make the link between the overuse of this chemical and many problems in the world’s bodies of water.

“Phytoplankton is a photosynthetic plant that basically amounts to ocean algae. Its biological processes are the same as land-based plants. Ocean and coral reef death can be traced to phytoplankton die-off, which has accelerated by 40 percent since the 1950’s. It wasn’t long before some researchers started asking: What new substance was introduced in the last 40 years that kills virtually all land-based plants? The answer: Glyphosate.” [Source]

While Monsanto claims that glyphosate has a specific half-life which would render it inactive by the time it leached from farmland to ocean’s via rivers and run-off, and that once diluted in the ocean its effectiveness as a killer of phytoplankton would be minimized, the fact remains that with such incredibly high usage of the chemical worldwide, claiming it only negatively affects the intended targets in farmland is absurd.

The nature of agriculture has changed dramatically since World War II and the rise of the transnational agrichemicals giants, and side effects of this relatively recent development in the history of agriculture are just now being more understood in terms of impact on human and environmental health.

“The transition from biologically based to intensive-chemical based agricultural production systems advanced in North America and Europe soon after World War II. This change was supported by growing availability of inorganic fertilizers and organically synthesized pesticides. Afterwards, this type of agriculture has been adopted by other major crop production areas throughout the world during the 1960s and 1970s. The intensive cropping systems are characterized as large-scale production enterprises that utilize high inputs of chemical fertilizers and pesticides.” [Source]

Alex Pietrowski is an artist and writer concerned with preserving good health and the basic freedom to enjoy a healthy lifestyle. He is a staff writer for WakingTimes.com and Offgrid Outpost, a provider of storable food and emergency kits. Alex is an avid student of Yoga and life.

This article (Monsanto’s Glyphosate Linked to the Death of Our Oceans and Coral Reefs) was originally created and published by Waking Times and is published here under a Creative Commons license with attribution to Alex Pietrowski and WakingTimes.com. It may be re-posted freely with proper attribution, author bio, and this copyright statement.